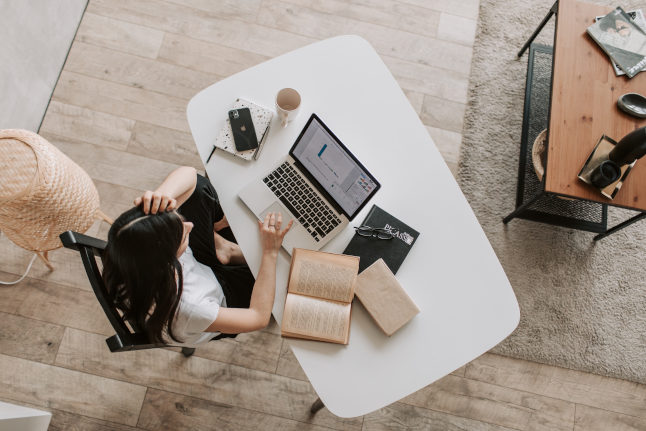 The job hunt is often a matter of trial and error for non-EU students. Photo: Vlada Karpovich/Pexels

This article is by Louise Rasmussen and is part of Changing the Narrative. Articles in this series are written by student or early career journalists who took part in The Local's training course on solutions-focused migration reporting. Find out more about the project here.

Every year more than 300,000 non-EU students move to the UK to study – many of whom need a student visa – a so-called Tier 4 visa – to live and study in the country. In 2019 alone, the UK Home Office granted roughly 277,000 student visas. Thousands of international students go on to look for employment in the UK after they graduate.

However, finding a job is more difficult than it is for their European counterparts for two reasons: The Tier 4 visa is time limited, meaning that students often only have a month or two to find a job after they graduate before having to leave the country. More importantly, non-EU citizens need to find an employer who is willing to sponsor their work visa, also known as a Tier 2 visa.

Tripti Maheshwari and Dhruv Krishnaraj were both looking for jobs in the UK after graduating with a Master's from City University of London and the University of Bristol respectively. As Indian nationals, they had to find an employer who would be able and willing to sponsor their work visa.

Currently, just under 31,000 companies in the UK have acquired the government licence to be able to sponsor Tier 2 visas in the first place. However, most job adverts don't even indicate whether the employer sponsors visas or not.

“It became like a matter of trial and error, where you are lucky to get a reply,” Tripti remembers. After a frustrating period of job seeking, they approached the university's career service, expecting to hear about an online job portal that would allow international students to filter opportunities and licensed employers. But there was no such thing.

The two students began by doing market research to confirm that there was indeed a gap in the market, and were inspired to start their own business: “You're spending a 100k on your Master's, so you definitely deserve a smarter solution than just trial and error,” Tripti says. After pitching their idea to City University, Tripti and Dhruv were granted an entrepreneurship visa, which enabled them to stay in the UK and start their project. In 2016, they launched Student Circus: an online platform that only lists jobs and internships where the employers are known to sponsor work visas.

The platform does not aim to guarantee non-EU students jobs. Rather, it allows them to apply in a level playing field with those students who might not need a visa: “Our goal is to empower students based on their talent – not the colour of their passports. Your skills should define you, and not your nationality,” Tripti explains.

The platform helps students save time and energy, and gives them the confidence that they have a fair chance of getting the job they apply for. Thousands of students have already secured jobs with the help of Student Circus.

Sardor Asurov, who is originally from Uzbekistan, started looking for jobs half a year before he graduated: “I applied to more than 50 places to get a sponsored job after University.”

He applied for jobs through Student Circus for roughly eight months, and secured a job as an equity analyst for Bloomberg after graduating in June 2018. He praised the platform for helping international students, but noted that it could be improved: “I think they need to make their website more user-friendly. I understand that they are still a startup, but I think a better website would really help them.”

Hamna Waseem Cheemna, who is originally from Pakistan, first secured an internship with Deloitte through Student Circus in 2019, and used the platform again in 2020 to apply for her current job at Ernst and Young. It took Hamna about three months to find a job: “We don't waste time finding out that this company sponsors visas and this one doesn't,” she says.

Hamna found the platform very user-friendly: “It was easy to navigate: You know which column is for internships, which one is for placements, and which one is for jobs, and you can filter out which companies you want to choose, and which location you want to work at.” Once students apply for a job through the platform, the ensuing process takes place solely between the employer and the applicant as most companies have their own HR system.

For the first few months after launching their platform, the founders of Student Circus worked nearly full-time on finding and filtering out manually the jobs that would offer a sponsorship. However, the founders increasingly began relying on technology to help them in the process and to ensure that they would list as many of the available jobs as possible, and they continue to fine-tune this filtering process.

“At Warwick University I had access to look at the companies who give graduate jobs and sponsor Tier 2 visas, but for my sister who was in Manchester University, she could not access everything, so there are some restrictions depending on which university you attend,” Hamna recalls.

Despite using the platform, Hamna's sister did not manage to secure a job in the UK and returned to Pakistan to work in marketing after she finished her studies at Manchester University.

Since Student Circus was founded in 2016, it has established contracts with 35 universities out of the roughly 165 higher education institutions listed in the UK, and the company is working on establishing more partnerships for the future.

While it was relatively easy for the founders to convince universities of the benefits of Student Circus, Tripti and Dhruv had a harder time explaining their idea to investors and companies: “Immigration and job search seems like a problem not many people can understand or relate to,” Tripti explains.

“At that time, everything was about inward-looking economies, and protecting your own people's jobs,” she recalls, and clarifies: “We're not saying that people from the UK should not get jobs, what we're saying is that if a student has made it to another country to study and has the right skills, that should be the primary concern for the company.”

In fact, convincing employers and investors to fund Student Circus was so difficult that the company was bootstrapped: Without investments, the platform continues to rely on revenue from partner universities that pay Student Circus for its services.

On the upside, establishing partnerships with universities has helped market the company's platform tremendously, according to Tripti: “The universities want to ensure that they have good service and that they can give their students equal opportunities, so it saves us a lot of money and gets us good attention.”

MORE FROM CHANGING THE NARRATIVE:

But Dhruv and Tripti found a way to overcome the challenges they faced: “We figured out that companies did not have a problem with hiring the person but rather with the immigration rules and all the paperwork that is needed. So we partnered with immigration lawyers who do this work for the company at a very low cost, and very quickly.” The founders also created a page on their website for the employers to get a better idea of what the process involved and how Student Circus will help them in the process.

In fact, the challenges that the two business partners faced was again an issue of perception, according to Tripti: “Companies thought that the process involved a lot of paperwork and that it would be very expensive, so they didn't want to be involved. We turned that around to say: Look, you're going to spend £2000-3000 on finding the right candidate through an agency for instance, but that candidate can leave you within six months. But if you invest in an international candidate who has the right skills, that person has to stay with you for three years because they are staying on a visa. So the attrition rate will be lower. And that approach really turned things around.”

While Student Circus has allowed thousands of international students to navigate the UK job market more confidently and efficiently, students who wish to use the platform are still limited by the UK immigration regulations, and overall job availability: “Whatever jobs are available determines what jobs we can help students with,” Tripti explains.

The cost of a government licence to sponsor Tier 2 visas varies depending on the size and type of the company. Due to the costs, it is generally difficult for smaller companies or start-ups to offer sponsorship to non-EU job seekers. “So far most jobs that provide sponsorships tend to be in the banking or IT sector, including research and medicine,” Tripti says, explaining that there is often a shortage of employees with the necessary skills for those sectors, which makes the companies more willing to acquire the necessary licence.

In contrast, Student Circus rarely lists any jobs in the creative industries, such as dance, music and drama: “Maybe it's because the starting salaries in those industries are very low, and that doesn't meet with the visa criteria,” she adds.

While the founders know that they still have many things to work on, they are confident that they are going in the right direction: “It's still a challenge, but we've triggered a thought in people's minds to say that they'll definitely put skills over anything else,” Tripti says.

Louise Rasmussen is a freelance journalist with a background in social anthropology. She is currently based in Amsterdam, The Netherlands, and regularly writes for DutchNews.nl.