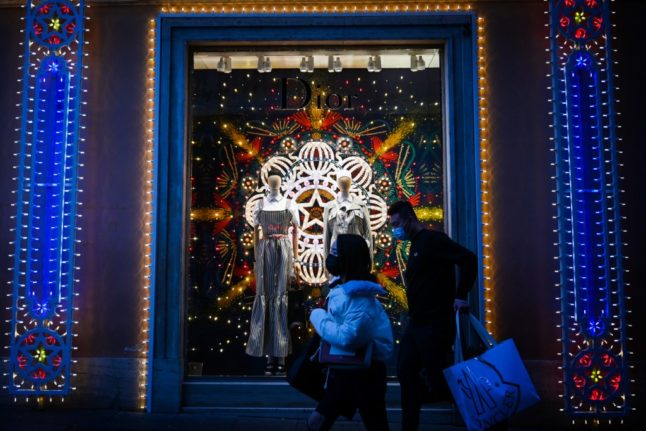 *Please note: This article is no longer being updated. For the most recent coronavirus updates please click here.*

Prime minister Giuseppe Conte will sign the new emergency decree on Thursday night. It will be in effect on Friday, December 4th until January 15th.

However, many of the rules on travel will tighten as we get closer to Christmas.

As well as banning travel between regions over the holidays, the new decree keeps ski resorts closed and requires anyone arriving in Italy from abroad over the holidays to undergo quarantine.

“The measures we’re adopting are adequate and proportional to the level of risk, without unnecessary penalization” Conte said in a press conference on Thursday night in which he announced the new measures.

“We have avoided a nationwide lockdown but now, near Christmas, we must not let our guard down,”

Quarantine and testing for arrivals

From December 10th-21st, residents returning to Italy from other EU countries will need to take a test before travelling and show the negative result on arrival. Previously, testing was a requirement for arrivals from just a handful of European nations.
Arrivals to Italy from non-EU or Schengen countries between December 10th-21st will be subject to a two-week quarantine.
From December 21st to January 6th, arrivals, all travellers arriving in Italy including from EU countries must undertake a two-week quarantine.
READ MORE:
No travel between towns at Christmas

The government has also approved a law prohibiting non-essential travel between regions from December 21st until January 6th.

The rules will be even stricter on Christmas Day itself, with a ban on travelling between towns and comunes in place on December 25-26th, and on New Year's Day.

“From December 21st 2020 to January 6th 2021, travel between different regions (including those to or from the autonomous provinces of Trento and Bolzano) will be prohibited, with the exception of travel for proven work reasons, situations of necessity or health reasons,” read a statement from the government on Thursday.
Conte repeated the statement in his speech, confirming that travel between different municipalities (or comunes) “will also be prohibited on December 25th and 26th 2020 and January 1st 2021.”
He clarified that people could still travel to reach relatives who are “not self-sufficient”.
The restrictions will apply nationwide even if, as ministers hope, all regions are downgraded to lower-risk yellow zones this month. Italian prime minister Giuseppe Conte. Photo: AFP
Further restrictions:
Cruises are banned from departing from or stopping in Italian ports over the holidays, and Italy’s ski resorts are closed until January 6th.
Hotels can remain open, but they must close their restaurants on New Year's Eve and serve dinner by room service only.

Restaurants will remain closed in red and orange zones, while they can stay open for lunch in yellow areas, including on Christmas Day, Boxing Day, New Year's Eve and Epiphany.

Shops will be permitted to stay open until 9pm, but shopping centres will remain closed at weekends and on holidays.
High schools across the country can also resume in-person teaching from January 7th.
Many existing measures introduced in early November remain in place, including the nationwide 10pm curfew and tiered system of restrictions.
The curfew means churches will need to reschedule midnight mass on Christmas Eve.
As expected, the new decree contains a “strong recommendation” against inviting people over for celebrations at home, though Conte confirmed this would not become a law.

The Italian government approved the new measures, in force throughout December, as it seeks to avoid a third wave of coronavirus infections as a result of festive gatherings.

“There is still a long way to go until we're out of the pandemic,” said Conte. “We must avert a third wave, which could arrive as early as January and be no less violent than the first wave.”

“Caution is essential to protect our loved ones,especially the elderly,” Conte said.

He also outlined the new “Christmas cashback” scheme, which he said was aimed at helping families and businesses.

Conte's emergency decree announcement came just a few hours after health authorities announced that Italy had recorded its highest-ever daily death toll from Covid-19, with 993 fatalities in the last 24 hours,

The death toll has been high in recent weeks, despite a downward trend in infection rates in many parts of the country.

The official tally on Thursday surpassed the previous grim record of 969 deaths, set on March 27th, when Italy was under national lockdown after becoming the first European country to be hit by the global pandemic.

Note: Some rules may vary under local or regional restrictions in Italy. It is recommended that you also check the rules set by your town and region. Find out how to do that in a separate article here.
For further details on the current coronavirus situation in Italy, please see the Health Ministry's website (in English).