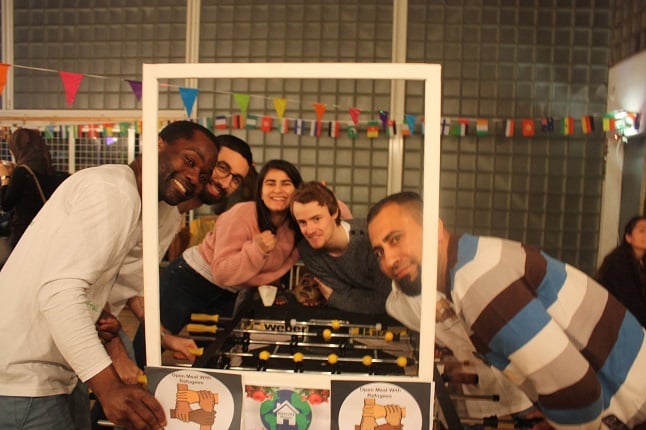 Open Meal With Refugees is a public potluck open to all. Photo: Open Meal With Refugees
This article is part of Changing the Narrative. Articles in this series are written by student or early career journalists who took part in The Local's training course on solutions-focused migration reporting. Find out more about the project here.

Every month, people from all over the Netherlands and beyond come together for a night of food, games, music and dancing. The event aims at sharing food across cultures.

Sahr John told The Local: “This project is the best of my whole life, the one I’ve received the best feedback for.”

He added: “It’s particularly loved by families. Parents can just bring along their kids and we have plenty of games organised for them.”

The event began as a small project involving around thirty people. Just before the pandemic, it had grown to include 120 guests from 45 to 50 nationalities each month.

“We were really attracting people from all over,” said John. “There was this professor who used to come all the way from Tilburg [around 100 kilometres away]. Now she's in Canada, but at the time she was encouraging her students to be part of the project and she was also helping us out. So that's how broad and touching the project was.”

Open Meal with Refugees is meant for people to feel treated as equals and enjoy a night of fun, games, and reciprocated cultural appreciation. Currently looking for a new location, it was previously located inside of The Worldhouse, a centre for and run by undocumented migrants.

Former volunteer Jess Haygarth explained: “The fact that the event was hosted in a space run by refugees made all the difference. It was them who were welcoming us into their space, rather than the contrary.”

This is the reason why the event doesn’t charge its participants, instead only welcoming donations. It means all participants are treated equally. Open Meal constitutes an occasion to get together, enjoy some food and make some friends.

These monthly events have contributed to create a wide yet tight-knit community which bridges the gap between refugees and Amsterdammers over food.

“Food is such a good way to get people together. Everyone has happy memories with food and it's so cool that there was food from, like, all over the world,” Haygarth commented.

Haygarth had just moved to Amsterdam when she first joined the event, and said: “It was such a great opportunity for me at the time. I met loads of people that I probably wouldn't have met otherwise.”

As well as new arrivals to the city, whatever their background, Open Meal was also a chance for long-term residents to expand their social circles in a welcoming environment.

“We used to have one regular visitor. She's a disabled Dutch woman. I would always make a special space for her at the event so that she could come and sit at the table with her wheelchair,” remembered John. “Now she doesn’t even need my help anymore because she has made just so many friends. She was able to meet a lot of people and make friends with them.” Food is at the core of the event, but mingling, music and dance also play a part. Photo: Open Meal With Refugees

Open Meals with Refugees has been put on hold since January due to the impact of the pandemic. The Covid-19 outbreak has deeply impacted the logistics of the event. Most activities of Open Meal with Refugees, such as dancing, sharing food, and, overall, socialising would either not be the same or directly impossible if socially-distanced.

This pause also showed John just how much he needed a break, tired and burned out by the amount of work required by both Open Meal and other projects. One of the difficulties of running the event, in fact, is capacity.

Despite volunteer support, John often found himself doing a significant amount of the work required to get the event up and running each time. Most volunteers were students and were only available either the day of or just a short time before the event, leaving John to create ads and promoting the event by himself.

Thanks to people supporting the project and John’s enthusiasm and hard work, Open Meal with Refugees has become one of the most famous grassroots projects of the Dutch capital. He is ready to pick up from where he left off in January.

When it does, participants and volunteers will appreciate its return. Haygarth remembered: “It was really nice to feel part of something, to meet people from all over. It was an event I looked forward to every month because if I missed it I knew I would have missed just a really lovely evening.”

Iris Pase is a freelance journalist specialising women's rights, bioethics and mental health. She has written for the Independent, VICE and (former) Newsmavens – among others. You can follow her on Twitter and Instagram.