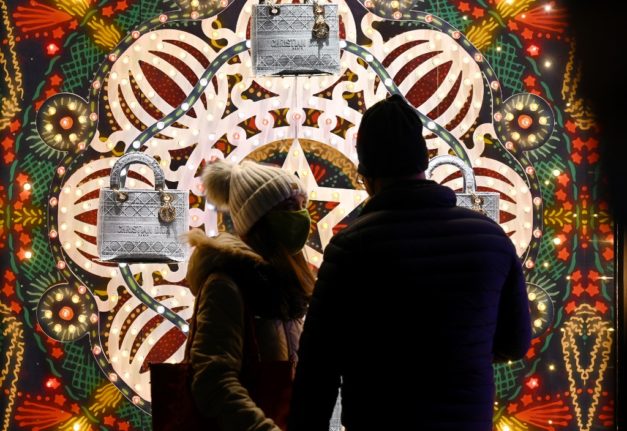 Italy's restrictions will get stricter over the Christmas holidays. Photo: Vincenzo Pinto/AFP

Italian prime minister Giuseppe Conte signed off on the latest emergency decree on Thursday night, and it comes into effect on Friday, December 4th, until January 15th.

But many of the rules, particularly on travel to and within Italy, will not apply for that entire period.

Restrictions tighten as we get closer to Christmas, before being relaxed again in the new year.

The measures are aimed at discouraging travel, parties and gatherings as the government fears holiday celebrations may spark a new wave of coronavirus infections.

To make the rules easier to follow, here's a list of which restrictions change on which dates.

The Italian government has extended existing restrictions on movement to and within the country, including the tiered system of restrictions and the 10pm-5am evening curfew introduced last month.

Non-essential travel remains restricted to, from and within red and orange zones – though ministers have repeatedly said they expect most areas to be downgraded to lower-risk yellow zones by mid-December.

As of December 13th, no region was classified red and only four regions, plus the autonomous province of Bolzano (Alto Adige/South Tyrol), were orange.

Find out what zone you're in using our map.

Most restrictions will stay in place until at least January 15th, when the new emergency decree expires.

Until December 9th, the rules on travelling to Italy from abroad also remain the same.

Until the 9th, under a extension to current rules, only travellers from Belgium, France, the Netherlands, the Czech Republic, Romania, Spain and the UK have to get tested, or face quarantine. (According to the new decree, tests should be carried out before travelling.)

From December 10th-20th: all travellers from the EU, Schengen Zone or the UK must get tested before departure, or face quarantine.

This includes Italian residents returning to Italy from other EU countries.

See more details on the new testing rules in a separate article here.

Arrivals to Italy from non-EU/Schengen countries between December 10th-20th will be subject to a two-week quarantine.

From December 21st to January 6th:
All travellers arriving in Italy, including from EU countries, must undertake a two-week quarantine.
Cruises are also banned from stopping in or departing from Italy during this period.
Travel is also restricted within Italy. No “non-essential” travel is allowed between regions, regardless of their colour under the tiered system.
On December 25th and 26th and January 1st non-essential travel is banned between towns or comuni across the country.
On New Year's Eve, December 31st, the evening curfew will remain in place and will be extended until 7am (rather than 5am) on New Year's Day.
From January 7th-15th all travellers from the EU, Schengen Zone or the UK must get tested before departure, or face quarantine.
Italian ministers say Italy will start to “reopen” from January 7th.