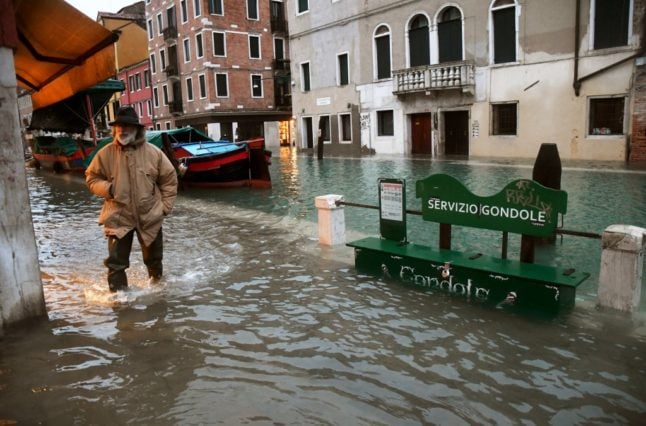 A man walks across a flooded canal on December 8th. All photos: Andrea Pattaro/AFP
Venice's St Mark's Square was under water on Tuesday after the city's newly completed system of artificial dams failed to activate.
The  massive flood defence system, aimed at protecting Venice's lagoon during high tide, was finally installed in October.
But on Tuesday the system failed to swing into action because the forecast erroneously predicted a rise of only 1.2 metres (four feet) above sea level.
“To activate Mose a bigger forecast is necessary,” Venice Mayor Luigi Brugnaro told the Italian news agency Agi. “We will have to review the rules of the command post.”
Mose takes some time to be activated and, by the time authorities realised the forecasts were incorrect on Tuesday, it was too late. Photo: Andrea Pattaro/AFP
City residents – long accustomed to perennial “acqua alta” or high water events – pulled on their rubber boots once more to deal with flooding that reached a high of 1.37 metres (4.5 feet) above sea level in the afternoon.
The waters drowned St Mark's Square – the Renaissance city's lowest area at about one metre above sea level – and invaded the famous basilica as many
shopkeepers blocked their entrances with wood panels to keep the water out.
People living in the city centre barricaded their homes against the floodwater which they reported was “up to our knees”.
The network of water-filled caissons is designed to be raised within 30 minutes to create a barrier capable of resisting a water rise of three metres above normal.
The Mose system has been activated several times this year, successfully preventing high tides from swamping the lagoon city.
Officials said a meeting would be held later on Wednesday to “analyse what happened yesterday and, if necessary, make significant changes to the procedures applied up to now for MOSE”.