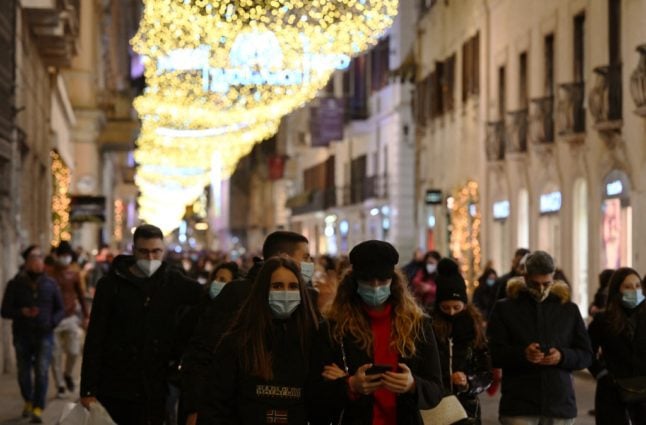 Further restrictions are expected, on top of those announced on December 3rd, after ministers sounded the alarm over crowds in city centres and health authorities said the coronavirus infection rate is still too high.

“We must avoid a third wave at all costs, because it would be devastating also in terms of the loss of human lives,” he added.

Conte and other ministers met with the CTS (Technical Scientific Committee), the government's advisory panel of health and scientific experts, on Monday to discuss further measures.

Ministers pointed to scenes of crowded shopping streets over the weekend as a cause for concern. Italian media over the weekend showed photos of city centres thronged with people, as restrictions were eased in several regions and many bars and restaurants reopened for the first time in weeks.

Italian health authorities meanwhile warned that the rate of new infections in the country is still worryingly high.

As a result, ministers say, they're looking at retightening the rules over Christmas.

“We are discussing the two weeks over  the Christmas holidays,” Health Minister Roberto Speranza told reporters on Monday. “I hope that further measures can be taken in a short time to avert a hypothetical third wave”.

An announcement on new restrictions is expected by Wednesday, according to Italian media reports, as discussions continue between ministers and the CTS.

Italian media speculates that the government could be about to introduce tough measures similar to those just announced in Germany – but ministers have said the situation in Italy is not comparable as the infection rate is rising in Germany, and falling in Italy.

Either option would send Italy into a form of lockdown over the holidays, with restrictions on travel and business openings.

Orange zone rules would mean shutting bars and restaurants, except for takeaway and deliveries, and banning non-essential travel between towns.
Red zone restrictions include ordering most shops to close and only allowing people to leave their homes for essential reasons such as work or buying essentials.
Italy's government has recently declared most Italian regions yellow zones, with a few orange zones remaining and no red zones.
MAP: Which zone is each region in under Italy's tier system?
Conte had said at the beginning of December that most of the country would turn yellow in order to allow some shopping in the period before Christmas.
Despite ministers' criticism of the crowds in Italy's main shopping streets, observers pointed out that government policy appeared to encourage people to go out shopping.

Conte's cabinet this month launched a “Christmas cashback” scheme that offers shoppers a ten pecrcent government refund for expenditure of up to 1,500 euros – though the purchase must be made in a physical store and not online, a move intended to support struggling small retailers.

Meanwhile, health authorities have recommended tighter restrictions, saying the tracing system and many hospitals are still struggling to cope.

Data from Italy's health ministry last week showed that the incidence of new infections was 193 per 100,000 people. It needs to be 50 per 100,000 to guarantee effective tracing, according to the report.
Healthcare infrastructure is struggling in around half of the country, the report notes, while the death toll also remains worryingly high with 846 more fatalities reported on Tuesday.
Italy is one of the countries worst hit by the pandemic. It has recorded nearly 66,000 deaths linked to Covid-19, more than any other country in Europe.
TIMELINE: How Italy's coronavirus rules get stricter towards Christmas

As things currently stand, Italy will impose stricter limits on international and domestic travel from December 21st to January 6th, with everyone arriving from overseas subject to 14 days of quarantine and crossing between Italian regions only allowed in emergencies.

The government has already reconsidered several rules since it unveiled the emergency decree on December 3rd.

In clarifications posted to its website, the government updated the rules on visiting second homes and on quarantine after travel abroad over the Christmas period.

It is widely expected that this rule may yet be altered to allow some travel between neigbouring towns, however nothing has been officially confirmed.