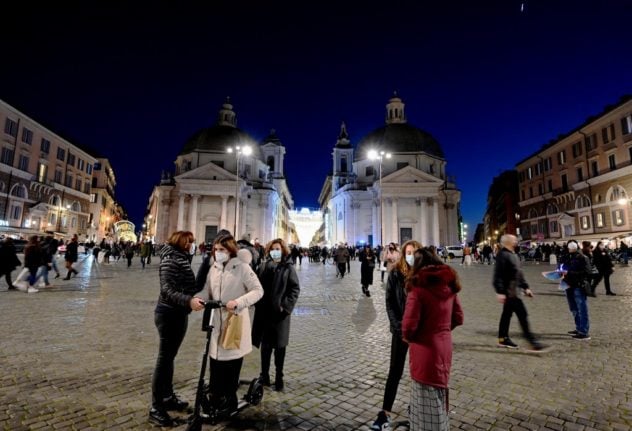 Most of Italy's regional governments, as well as health minister Roberto Speranza and other cabinet ministers, have voiced support for the strictest possible measures to be enforced in Italy over the Christmas period.

However, while some form of new restrictions look likely, nothing has yet been confirmed as prime minister Giuseppe Conte continues talks on Wednesday evening.

Further restrictions are expected, on top of those announced on December 3rd, after ministers sounded the alarm over crowds in city centres and health authorities said the coronavirus infection rate is still too high.

READ ALSO: Is Italy about to announce a national lockdown over Christmas?

Conte said on Tuesday that stricter rules were needed to avert the risk of a third wave of coronavirus infections.

Though Conte has held a series of meetings with health experts, regional governments and different political parties in recent days, no agreement on the new rules has yet been reached.

Conte is now under pressure to sign off on tough rules, with most regional leaders, Speranza, culture minister Dario Franceschini, regional affairs minister Francesco Boccia, and the Five Star Movement, one of the main parties in Italy's ruling coalition government all in favour, Italian newspaper La Repubblica reports.

“At the Ministry of Health we have proposed to opt for a strict measure that closely resembles the red zone,” Health Undersecretary Sandra Zampa told media on Wednesday.

Veneto regional president Luca Zaia said he'd like Italy to be declared a red zone until Janary 6th, Ansa reports, a position shared by authorities in Lazio, Friuli Venezia Giulia, Molise and others.

They are “calling for a national red zone from December 24 to January 6th,” La Repubblica writes.

“Even the regions today spoke in favour of the lockdown, with no difference between center-right and center-left administrations.”

Conte is reportedly hoping to avoid imposing the tough red zone measures, which would mean closing all non-essential shops over the holidays.

The prime minister is seeking a “compromise scenario” which would mean “red zones during holidays and orange on the days before holidays,” Repubblica said.

“But even for this plan, there is still no agreement.”

Regional leaders said they were concerned about an “exodus” from north to south next weekend, December 19-20, ahead of new travel restrictions coming into force on the 21st, Ansa reports.

Ths would echo scenes in March, when thousands of people fled northern Italy ahead of the first lockdown – returning to southern hometowns, and often taking infections with them.

Under Italy's tiered system of rules aimed at stopping the spread of coronavirus, red zone restrictions are the strictest possible measures intended for areas with a high contagion rate.

Enforcing them aross Italy would effectively amount to a national lockdown.

The rules include ordering most shops to close as well as restaurants, and forbidding travel within as well as to and from regions, only allowing people to leave their homes for essential reasons such as work or buying essentials.

MAP: Which zone is each region in under Italy's tier system?

As things currently stand, Italy will impose stricter limits on international and domestic travel from December 21st to January 6th, with everyone arriving from overseas subject to 14 days of quarantine and crossing between Italian regions only allowed in emergencies.

The government has already reconsidered several rules since it unveiled the emergency decree on December 3rd.

In clarifications posted to its website, the government updated the rules on visiting second homes and on quarantine after travel abroad over the Christmas period.

It is widely expected that this rule may yet be altered to allow some travel between neigbouring towns, however nothing has been officially confirmed.

Red zone restrictions include ordering most shops to close and only allowing people to leave their homes for essential reasons such as work or buying essentials.