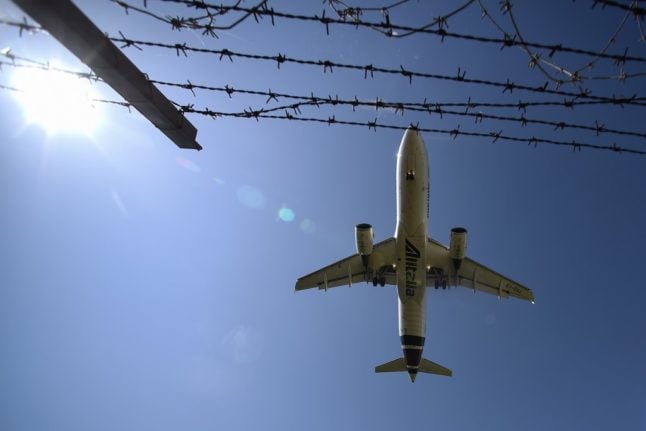 Air travel between the two countries has been suspended, Italy's health minister said on Sunday.

Health Minister Roberto Speranza stated on Sunday afternoon that he had signed an ordinance “which blocks flights from Great Britain and prohibits entry into Italy of people who have stayed there during the last 14 days”.

EXPLAINED: What you need to know about Italy’s UK coronavirus travel ban

The travel ban applies from December 20th until January 6th, according to an update on the Italian government's travel advice website.

Anyone already in Italy who recently travelled from Britain “is required to undergo an antigen or molecular swab test by contacting the health authorities,” Speranza added.

Here's how to contact the local health authorities in Italy.
The flight ban is a “precautionary measure” advised by Italy's scientific experts while they try to “understand the extent of the problem,” Speranza said.
“Having found a variant of the virus, we're facing a new problem. We've chosen to block flights until we understand it better,” he said in an interview on Italian TV channel Rai 3.

“The UK has raised the alarm about a new form of Covid resulting from a mutation in the virus,” Foreign Minister Luigi Di Maio wrote earlier on Sunday in a Facebook post.

“As a government we have a duty to protect Italians. For this reason, after having notified the English government, along with the Ministry of Health we are about to sign the order to suspend flights with Great Britain.”

Airport authorities in Rome confirmed that flights to and from the UK were being cancelled, after reports that passengers were prevented from boarding UK-bound flights from Rome's Fumicino airport.
“Flights to and from the UK and Northern Ireland have been cancelled, due to the Health Ministry ordinance valid until January 6th”, Rome airport authorities announced on Sunday.

The 110 passengers who landed at Fiumicino in the afternoon on a flight from London Heathrow – the last one before the travel ban – were being tested at the airport according to Italian media.
On Sunday, one person tested positive in Rome for the new strain after recently arriving from the UK.
A patient in Rome's Celio military hospital had been found to have the new more infectious virus mutation, a health ministry statement said. The patient was in isolation along with family members.
The Netherlands on Sunday banned air travel to and from the UK until at least January 1st after Dutch authorities confirmed that they had isolated at least one case of the same variant of the virus in the country.

Belgium also announced a ban on flights for 24 hours, which looks set to be extended.

READ ALSO: Germany to stop all flights in and out of UK starting midnight Sunday

Confirmed: Sweden will join a growing list of countries to ban travel from the UK over concerns of a new Covid strain: https://t.co/X5ec3ZhdUS https://t.co/19jUXQP5DC

France announced a ban on travel from the UK, including by road and rail, for at least the next 48 hours.

To give an idea of the time span of UK travel bans:

The new variant of the virus is believed to have first appeared in the London and Kent areas in September, and is reported to be up to 70 percent more contagious than other strains.

The World Health Organization said that nine cases have been detected in Denmark and one each in the Netherlands and Australia.

A new strain has also been identified in South Africa.

The variant was cited by British Prime Minister Boris Johnson as the reason behind last-minute changes to health restrictions in London and South East England, announced on Saturday, which have seen thousands of people unable to travel as planned over Christmas.

CALENDAR: What are Italy's coronavirus rules over Christmas and New Year?

The new coronavirus variant is spreading more rapidly than the original version, but it is not believed to be more deadly, the BBC reports.

The same mutation of the Covid-19 virus has also been detected in the Netherlands, Denmark and Australia, the WHO told the BBC.

There is no evidence to suggest the new variant reacts differently to vaccines.

London and many parts of south-east England have been placed under further restrictions in a bid to curb the spread of the virus.

All travellers arriving in Italy had already been subject to mandatory quarantine from December 21st.

Travellers from the UK also already faced the possibility of a ban on non-essential travel from January 1st, when the UK will be outside the EU and therefore covered by the closure of the Bloc's external borders, which has been in place since March.