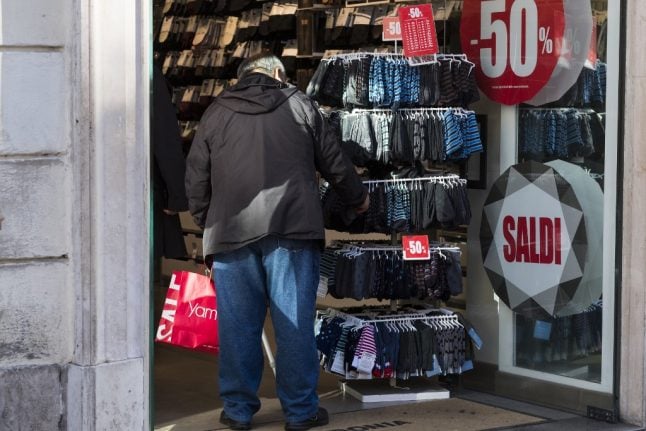 While in some countries the January sales start as oon as Boxing Day, in Italy you'll have to wait until at least early January. And this year, you may have to wait longer.

Italy's winter sales last for a long time, though: in many areas they go on until March.

READ ALSO: Everything you need to know about sales shopping in Italy

Another particular feature of Italy's sales is that they begin and end on different dates in each region.

And this year, the dates have been staggered more than usual, with some regions opting not to allow sales to start for several more weeks due to concerns about crowds gathering during the coronavirus pandemic.

When do the sales start?

Here's when the 2021 winter sales officially begin in each Italian region:

Marche and Trentino Alto Adige (except the autonomous province of Bolzano, where the sales start on 13 February): January 16th

However, even in regions where the sales have already started (at least in theory), you can't actually hit the shops just yet.

From January 5-6th, the whole of Italy remains under “red zone” restrictions meaning all but essential shops must remain closed.

READ ALSO: How will Italy's coronavirus rules change in January?

You might have noticed that some bigger stores have started limited sales earlier than these dates, with discounts available only to those shoppers who have a membership card.

Italian shops can only hold sales twice a year – once in winter, once in summer – and they are subject to various government regulations, which trade associations have said should be removed, at least for 2021.

Spending and footfall is expected to be significantly lower than usual due to the pandemic and associated restrictions, and shops say they are struggling to compete with the year-round discounts offered by online retailers.