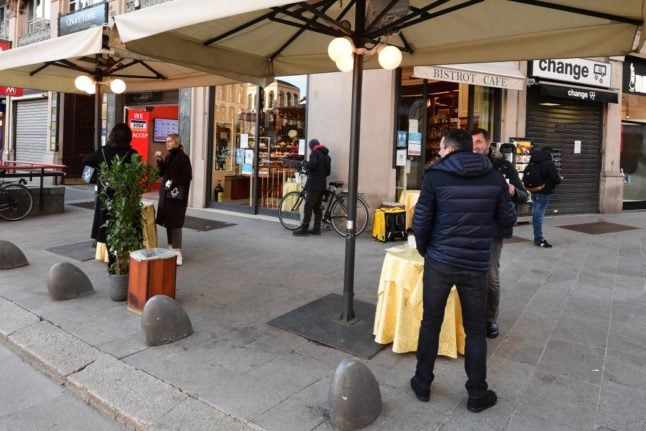 The decree renews all measures currentlly in force, including the evening curfew starting at 10pm.

Here's a look at what changes and what stays the same under the new decree:

The current ban on leaving your region, introduced initially as a temporary measure over the Christmas holidays, will remain in place until at least February 15th, the government has announced.

That means that even travelling between yellow zones, where restrictions are lighter, is forbidden except in emergencies.

You can continue to cross regional borders for work, health reasons or necessities, or to return to your place of residence.

Takeaway drinks ban
The government has confirmed a ban on selling takeaway drinks (from bars which do not also sell food) from 6pm.
The goal is to prevent gatherings by stopping people from drinking near the premises.
Limit on house guests

Until March 5th, the government has extended the guideline first introduced over the Christmas holidays that people should invite no more than two adults over at a time.

You're allowed to travel once per day within your own region, if you live in a yellow zone, or within your own comune if your region is orange or red, to visit someone else's home. And while you shouldn't be accompanied by more than one other independent person over the age of 15, you're allowed to bring children under 14 or other adults who need care.

The government has also extended an exception for people in small towns (5,000 residents or fewer), who are allowed to leave their own comune to go to any other town within a 30 kilometre radius – so long as they avoid the provincial capital.

They can continue to do so even if their region is declared a red or orange zone, where residents of larger towns must stay within their own comune.

Under the new decree, museums and galleries will be allowed to reopen in yellow zones from Monday to Friday.

Italy is adding an extra tier to its system of varying restrictions: white, reserved for parts of the country where the coronavirus risk is lowest.

These areas will be exempt from the restrictions in place in yellow, orange or red zones, including a nightly curfew and 6pm closing time for bars and restaurants.

None of Italy's 20 regions currently meet the criteria, going by the latest health data; the region that comes closest is Tuscany, where the rate of incidence is still around three times higher than it would need to be.

Most regions expected to turn orange

Most Italian regions are expected to be placed in the orange zone later on Friday, Italian media reports.

Changes to Italy's tier system will be confirmed separately by the health minister, as these are based on weekly health data from each region.

Good news if your permesso di soggiorno was due to expire by April 30th: it will be automatically extended until May 20th, giving you a few extra weeks to go to your local police headquarters to renew it.

The deadlines to hold any upcoming special parliamentary elections and municipal elections have been pushed back to May 20th.

The government has also extended the Covid-19 state of emergency until at least April 30th, the health minister announced on Wednesday.

The state of emergency does not determine the rules.

However, it allows the govenment to bypass red tape, speeding up the response to the changing coronavirus situation by passing new rules under emergency decrees.