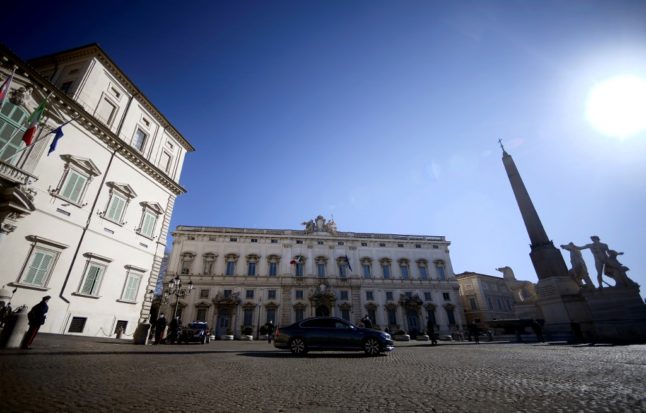 Prime Minister Giuseppe Conte leaves the Quirinale presidential palace by car after submitting his resignation on Tuesday. Photo: AFP
Conte tendered his resignation to President Sergio Mattarella, the ultimate arbiter of Italian political crises, who invited him to stay on in a caretaker
capacity pending discussions on what happens next.
PROFILE: Italy's Giuseppe Conte, from 'populist puppet' to political survivor
The uneasy coalition government that has led Italy since September 2019 was fatally weakened earlier this month when former premier Matteo Renzi withdrew his small Italia Viva party.
Ahead of a key vote in parliament this week that he looked set to lose, Conte informed his cabinet on Tuesday that he would quit in what supporters said was a tactical move to form a new government.
After the meeting with Mattarella, a spokesman for the president said he “reserves the right to decide (what to do next) and invited the government to
stay in office in a caretaker capacity”.
Mattarella will open discussions with party leaders on Wednesday afternoon which are likely to lead into Thursday — leaving a vacuum at the top of government during the coronavirus pandemic and economic crisis.
Conte is expected to seek a new mandate for what would be his third consecutive government in three years, but this depends on his ability to
expand his parliamentary majority.
He can currently count on the populist Five Star Movement, the centre-left Democratic Party and the smaller leftist Free and Equals party.
Nicola Zingaretti, leader of the centre-left Democratic Party (PD), the other main partner in the coalition, so far is backing Conte.
He tweeted that he was “with Conte for a new government that is clearly pro-European and supported by a broad parliamentary base”.

But other lawmakers will be needed to form a viable new government, and “it is currently unclear whether Conte can succeed in such an effort”, analyst Wolfango Piccoli noted.

If he cannot, the M5S and PD could “ditch Conte and look for another candidate” to head a new coalition government.