Italy's health ministry on Friday announced an easing of coronavirus restrictions in many regions, despite warnings from public health experts that rules should be tightened, and concern about the accuracy of some data.

Based on the latest regional contagion data reported by the Health Ministry and Higher Health Institute, coronavirus risk levels will be downgraded from Monday in most parts of the country.

All but five of Italy's regions will turn “yellow” under the colour-coded system of yellow, orange and red that indicates  coronavirus risk and the restrictions in place.

Veneto, the region around Venice, is to go from an orange to a yellow zone, which allows the daytime reopening of bars and restaurants and greater freedom to travel within the region.

Calabria in the south and Emilia-Romagna in the north were also downgraded from orange to yellow.

The Minister of Health, Roberto Speranza, is set to sign a ordinance that comes into effect on Monday Fbruary 1st.

From that date, the regions of Puglia, Sardinia, Sicily, Umbria and the autonomous province of Bolzano will be in the orange zone.
All the other regions and autonomous provinces are in the yellow zone.
(For more details on rules in each zone and the current restrictions in place until Sunday, click here.)

Changes to the zones under Italy's regional tiered system of restrictions are announced weekly, shortly after a Health Ministry report is published on Friday evenings.

Meanwhile, other countries in Europe are looking at hardening restrictions.

The World Health Organization's European branch warned on Thursday that it was “too early to ease up” due to a “still very high” presence of the virus.

He told AFP lockdown measures adopted in Italy over Christmas and New Year had helped stabilise virus numbers, without lowering them.

Nevertheless, “right now it is extremely difficult to propose stricter measures due to resistance from both politicians and public opinion”, Ricciardi said. 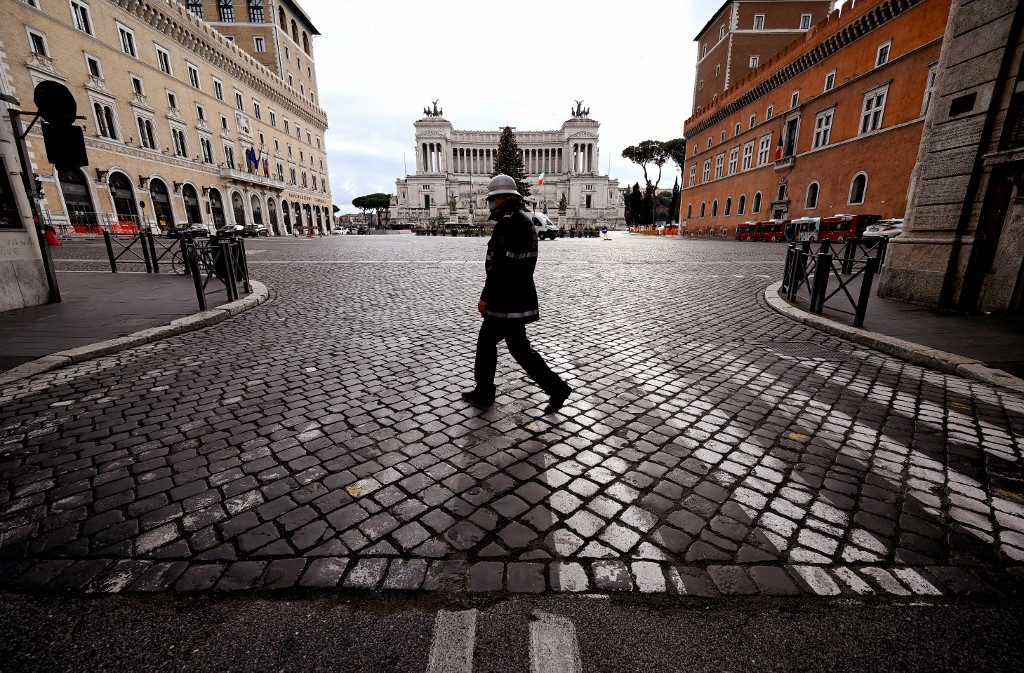 Italy was placed under a series of strict lockdowns over the Christmas holiday period. Photo: AFP

Even if politically unpalatable, Ricciardi said the country would benefit from a “brief stiffening” of virus rules, as well as more centralised decision-making on the pandemic.

The relaxtion comes as a report from Italian intelligence agencies reportedly found problems with Italy's data on infection rates.

A dossier given to outgoing prime minister Giuseppe Conte reportedly stated that a change to the way test results were reported, along with regional inconsistencies in reporting methodology, has created “chaos”.

This means the infection rate since mid-November is thought to be underestimated by as much as 50 percent, reports stated.

Ricciardi also suggested that Italy's largely decentralised response to the pandemic – with regions left in charge of vaccinations, with mixed results – needed fixing.

“We need a clearer chain of command… a decisive step-change in management with a government fully in charge, ready to centralise decisions in its hands,” Ricciardi said.

Politicians are currently preoccupied with the government crisis, deepened by this week's resignation of Prime Minister Giuseppe Conte.

His cabinet remains in charge, but only in a caretaker function.

“This is a war … and if we were to compare it to World War II, we are not in 1945, but in 1941,” Ricciardi said, warning that victory was still far off, and that the political crisis needed to be solved quickly.

“If we don't have a government with full powers … it is clear that the situation in Italy risks becoming even more critical,” he added.

According to GIMBE, an independent think tank, Italy had 799 virus cases per 100,000 inhabitants in the January 20-26 period.

Until that number is brought to below 50 cases, it would be impossible to ensure effective virus test and tracing procedures, Ricciardi warned.