It's carnival season in Italy, though many events are postponed or going ahead without crowds this year. Writer Richard Hough in Verona tells us about his city's colourful traditions.

It was carnival day, and I had no idea how I was going to pay the bill.

We’d just devoured the most decadent aperitivo imaginable in one of Piazza Erbe’s most salubrious bars, but I didn’t have a centesimo to my name.

This was way back in February 2012 and it was our first taste of Verona’s vibrant annual street parade. We had relocated to Italy the previous summer and were still in that idyllic honeymoon period, when everything felt so fresh, colourful and exciting.

IN PHOTOS: Venice celebrates 2021 carnival without the tourist crowds

I’d raced home at lunchtime, ditched my work bag, and rushed straight back out to pick up my son from scuola materna.

Dressed in his polyester Iron Man onesie, he was super excited to be leaving school early and venturing into town to see the carnival for the first time.

As we threaded our way through the streets towards Piazza Erbe, we got our first taste of the incredible carnival atmosphere.I strapped him in on the back of my bike and we set off in the bright winter sunshine, singing gleefully as we went.

Big crowds were already beginning to form. The smell of le frittelle di carnevale, delicious, sweet balls of fried pastry, loud insistent music and neighbours yelling across at each from their upper floor balconies. Everyone was dressed up, cars beeped cheerfully as we passed, mobs of feral teenagers with brightly coloured hair ran amok, leaving behind a sticky trail of foam, eggs and flour.

As we arrived in Piazza Erbe the scene bordered on the chaotic. Delighted tourists, expectant kids and tipsy locals, all in fancy dress, all jockeying for prime position to view the parade. Volunteers in high-viz vests vainly attempted to keep the crowds in check behind the flimsy rope that marked the route the procession would take. 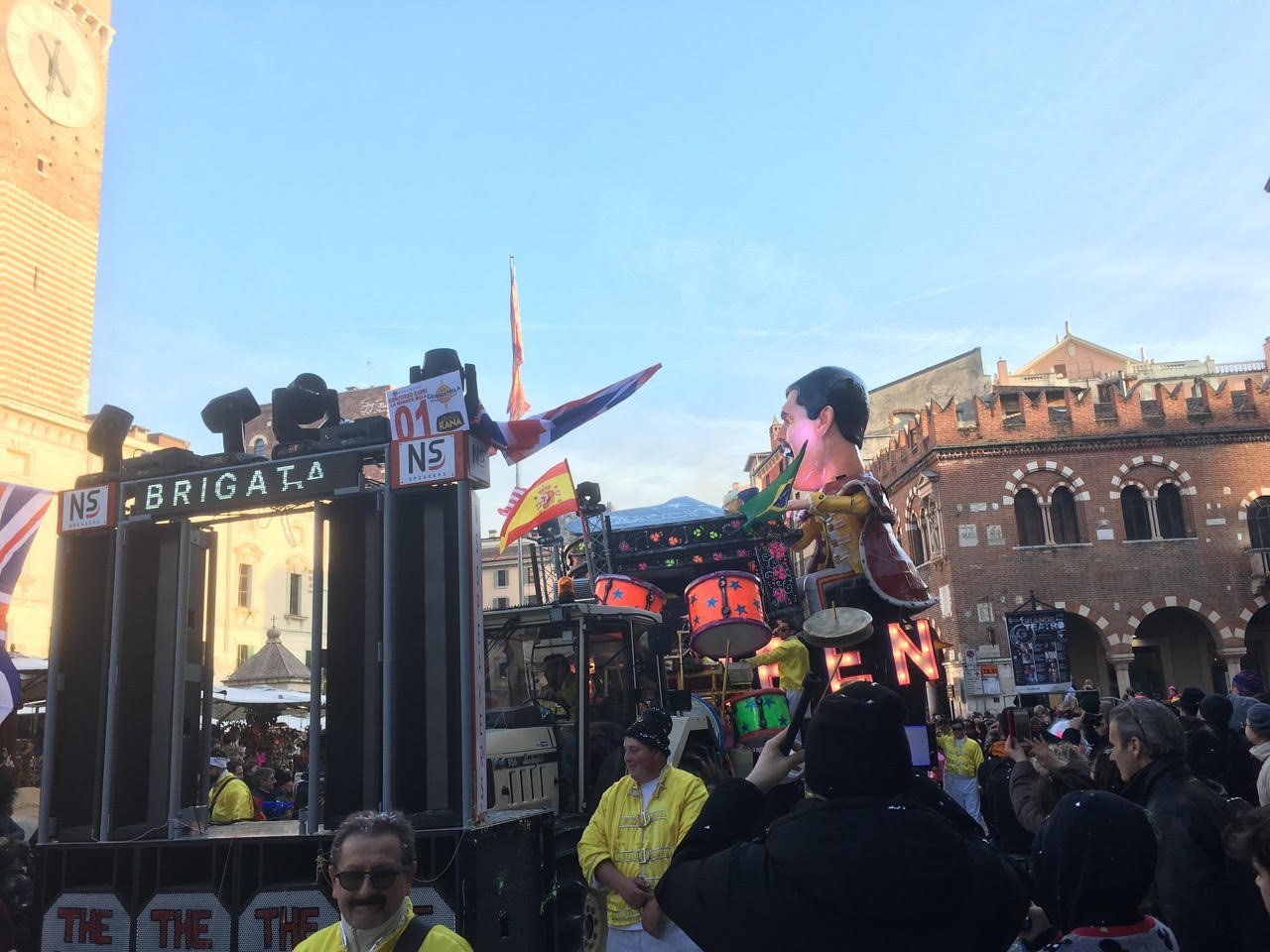 We parked our bike and found a decent spot at the top corner of the piazza, opposite the giant marble column topped with the lion of San Marco.

Waiting for parade to arrive, I tried to explain above the noise what little I remembered about the history of the event to my son, now comfortably perched on my shoulders.

Il Bacanal, the Carnival of Verona, is one of the oldest street parades in Italy. Its origins are said to date back to the middle ages, when Verona was ravaged by war, flooding, disease and famine. With grain prices soaring, the city’s poor, especially those crowded into the slum San Zeno neighbourhood, faced poverty, famine and starvation.

On 18 June 1531, in the Piazza of San Zeno in front of the Romanesque basilica, the hungry gathered and demanded to be fed. The people were desperate, and a violent revolt was only averted thanks to the timely intervention of a local doctor named Tommaso Da Vico.

Da Vico organised the distribution of bread, wine, flour, butter and cheese to the poorest inhabitants of the neighbourhood. He died soon after, but in his will he requested that every year, on the last Friday before Lent, gnocchi and wine be distributed to the poor people of San Zeno.

READ ALSO: The truth about Juliet's balcony in Verona – and why it's still worth a visit

It is a tradition that has survived through the centuries. Nowadays, a massive parade of over 4000 masked participants and 40 extravagantly decorated floats slowly snakes its way from Corso Porta Nuova to Piazza San Zeno.

The parade is a lively expression of satire, comedy and joy, led by Papà de' gnocco, a masked man representing an old king. Instead of a sceptre, he holds a huge fork topped with giant gnocco!

This morning's work has introduced me to the Veronese carnival tradition of “Gnocchi Friday” and “Papà del Gnoco”, or Father Gnocchi, who holds a golden fork with a gnocco on the top.

There is so much to like about this. More festival kings & queens of food please! pic.twitter.com/Af8p85cjci

In the shadow of the ancient cathedral of San Zeno, a giant Roman slab is said to mark the final resting place of King Pepin, son of Charlemagne (Charles the Great), who died here in 810. It was from this stone table that Da Vico is said to have served his gnocchi to the starving people of San Zeno. Next to the stone table is a crumbling bust of the man himself, whose generous act of charity is still celebrated and remembered nearly 500 years later.

Back in Piazza Erbe we were beginning to wilt. My son had been on my shoulders for a couple of hours now, watching slack jawed as the wild parade slowly and noisily passed in front of us.

Spotting a gap in the procession, we dashed under the rope and crossed the street, through the crowded piazza. We found a table in the sun and ordered with some extravagance. A mountain of pancakes and a cioccolata calda con panna for him, an Aperol spritz with a lavish antipasti misti for me. 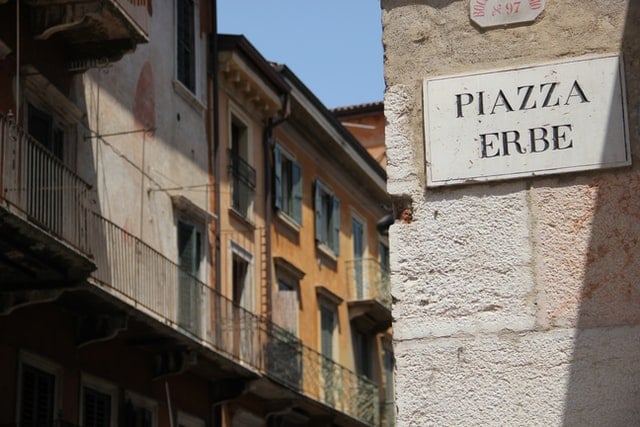 It was only as we were polishing off the last remaining crumbs of our feast, that it dawned on me that I’d left my wallet in my bag at home!

I thought for a moment about running away without paying. Who would notice amidst all the confusion? But I couldn’t. I was just beginning to find my way in this new city, and I couldn’t risk tarnishing my reputation (such as it was) at such an early stage!

But what was I going to do?

In the end I called a classmate from my Italian class. I hardly knew her, but we had exchanged phone numbers and there was no one else I could think of.

To her credit she was there within 10 minutes and lent me the cash I needed to pay the bill. I was mortified. Apologising profusely, I promised to pay her back at our lesson the following day.

On the way home, my son fell asleep on the back of the bike. Despite the drama, it had been an exhilarating day, a truly joyful event that we’d look forward to every year.

This year, of course, it will be different. The carnival has already been postponed from February 12th to May 7th, and the latest rumour is that it will be delayed again until September.

After the trauma of the past 12 months, assuming the situation improves and the parade eventually goes ahead, Verona’s next carnival could one of the biggest parties the city has ever seen.

Just as long as I remember my wallet!

Richard Hough has lived in Verona since September 2011 and writes about the region's history, football, wine and culture. His first book, Notes from Verona, a short collection of diary entries from inside locked down Italy, is available here. He is currently researching his next book about wartime Verona.