Tour guides and visitors have accused the Vatican Museums of not following Covid-19 protocols, saying their visits were spoiled by overcrowding at the newly-reopened attraction on Saturday.

While just a small number of visitors were able to enjoy the famed museum as it reopened on February 1st, by February 13th there were complaints of overcrowding at the site.
“There was no distancing, no organization, it was pure madness,” tour guide Vincenzo Spina wrote in a letter to the museum's management, which was reported in Italian newspaper La Repubblica after he shared it on social media.
“I led a small group inside the Vatican Museums. What I saw made me feel deeply ashamed,” said Spina. “It felt like a subway platform at rush hour, with families trying to turn back  other visitors yelling 'they kidnapped us'.”

Dozens of Italian visitors took to Tripadvisor to complain about scenes of “chaos” in parts of the museums on Saturday, saying crowding was especially bad in the Raphael Rooms.

One visitor wrote that there was an “absolute lack of compliance with the safety rules relating to Covid” during her visit on Saturday.

“People found themselves at various times in a sort of hellish circle, without the minimum distancing required by the regulations in force.”

Another said: “Lots of groups with guides were stuck in the halls… in this period it is an unacceptable organizational error.”

Museum staff were reportedly unable to control the crowds, and some responded to complants about overcrowding by telling visitors to “blame the 'upper floors'”, La Repubblica reported.

The museum's management had not responded to Spina's letter or media requests for comment on Tuesday, La Repubblica said. 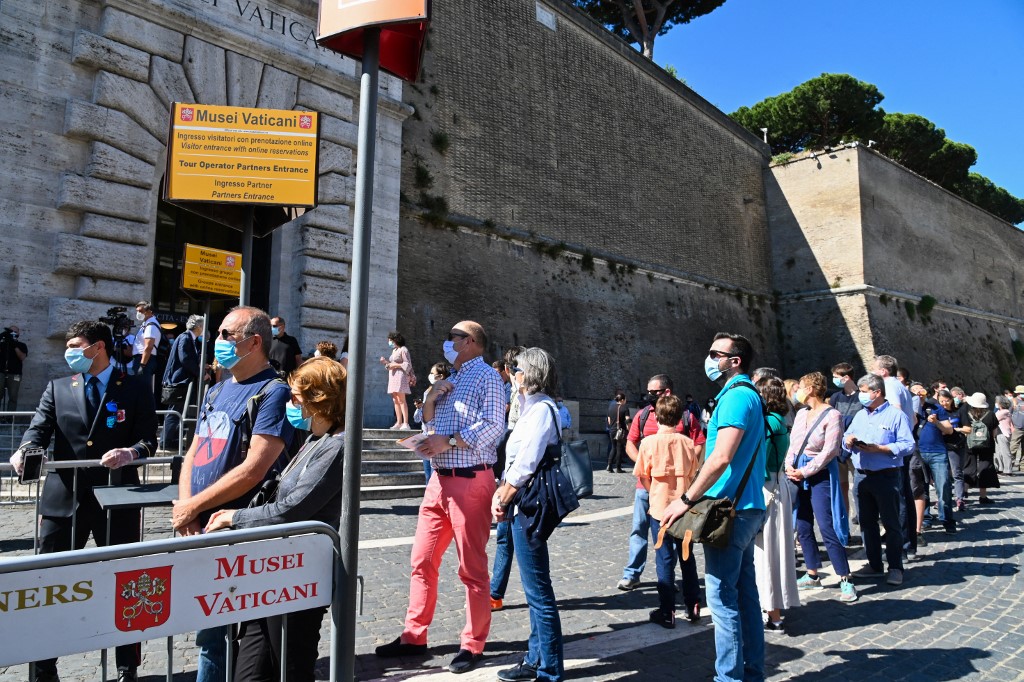 People queue outside the Vatican Museums in June 2020. Photo: AFP

Italy's museums and art galleries were then closed again in November under renewed restrictions.

Museums are currently allowed to reopen from Monday to Friday in “yellow zone” areas under the country's colour-coded system of coronavirus rules.

The museums within the Vatican State however are allowed to open Monday to Saturday.

At the moment, people can only travel for tourism within their own region in Italy as domestic travel restrictions remain in place.