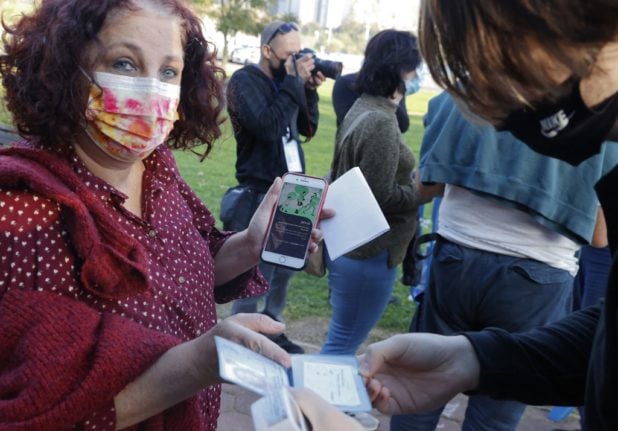 An Israeli woman shows her "green pass" (proof of being fully vaccinated against the coronavirus) before entering the Green Pass concert for vaccinated seniors. Photo: Jack Guez/AFP

Commission chief Ursula von der Leyen announced the plan for a “digital green pass” in a speech to German lawmakers on Monday and then added some details on Twitter.

The “digital green pass”  would provide proof that a person has received the vaccination as well as test results for anyone who has not yet been vaccinated. It would also include information on recovery for anyone who has previously contracted Covid-19.

“The aim is to gradually enable them to move safely in the European Union or abroad – for work or tourism,” von der Leyen tweeted.

The aim is to gradually enable them to move safely in the European Union or abroad – for work or tourism.

The Commission will present the legislative proposal this month. Von der Leyen said, it will “respect data protection, security and privacy.”

The news could provide a significant boost to Europe’s tourism industries ahead of the summer.

Leaders of the EU27 met last week to discuss a joined-up approach but no united plan was announced.

Spain and several other southern countries have repeatedly requested that the Commission introduce a certificate. Greece had already announced it would create its own vaccine passport system, agreeing a digital “Green Pass” with Israel and entering talks with the UK.

An independently reviewed, real-world study of the Pfizer/ BioNTech vaccine in Israel found it had cut transmission in symptomatic cases by 94%, according to data published in the well-regarded New England Journal of Medicine.

“As long as the number of those who have been vaccinated is still so much smaller than the number who are waiting for vaccination, the state should not treat the two groups differently.”

President Macron also raised concerns about the fairness of vaccine passports on young people at the EU27 virtual meeting.

However, he is preparing a “pass sanitaire” or ‘health pass” this week to allow French residents to visit tourist attractions and hospitality venues when they reopen. Residents would register negative PCR tests or vaccination certificates on an application.

In the UK, Downing Street confirmed that UK officials will speak to their EU counterparts after Brussels unveiled plans for the passport, Politics Home reported.

The Prime Minister’s official spokesperson said: “You can expect [the Department for Transport] will work [with], and do speak to countries across the world in terms of how they may look to introduce passports.”