From updated Covid-19 restrictions to online bureaucracy, here are the changes in Italy you should look out for in March.

The Italian government is due to announce a revised set of coronavirus restrictions this week under a new emergency decree..

The decree is expected to be approved by March 5th and will stay in place until April 6th, health minister Roberto Speranza said on Wednesday, meaning it will cover the Easter period.

READ ALSO: What will change under Italy’s next emergency decree in March?

It will be the first emergency decree to be released under the new government led by prime minister Mario Draghi.

Not much is expected to change, as Speranza said last week that “measures cannot be relaxed” due to the rising contagion rate in most parts of the country.

The Italian government said last week that it intends to keep Italy’s tiered system of restrictions in place – meaning a nationwide lockdown is not on the cards. However, as numbers rise, more local lockdowns and other additional restrictions are being put in place around the country.

The Italian government has announced plans to speed up the national Covid-19 vaccination programme from this month.

The government said the aim is to have 200 thousand doses administered per day in March, for a total of 6.2 million doses this month.

Currently, around 108,000 doses are being administered daily. At this rate, Italy would not meet its stated target of vaccinating most of the adult population until December 2021, instead of September as hoped.

Spring is here – and the clocks change

The warmer weather and increased daylight we’ve all been waiting for is here as spring officially begins this month.

However, get ready to lose an hour’s sleep: the 2021 time changeover to Daylight Savings is scheduled for the early hours of Sunday, March 28th.

The clocksgo forward by one hour from 2 to 3am, which means the night will be shorter. The changeover means it will be darker in the morning, but light will last longer in the evening.

And this could be the last time this happens in Italy, and in other EU countries.

According to EU legistlation, member states that decide to stay on summer time will put their clocks forward for the final time in March 2021.

While some countries have already said they favour scrapping the hour change, including France, Italy hasn’t yet taken a definite position.

In a Europe-wide survey in 2018 some 80 percent of Europeans voted in favour of stopping the clock changes, with most people appearing to prefer to stay on summer time rather than winter time.

But EU countries still haven’t agreed on how to do this to avoid cross-border confusion between neighbouring countries, and the pandemic has put the debate on pause.

From this date, all digital services are supposed to move to the government’s IO app, which is what you’ll need to use if you want to access public services from your smartphone.

These two electronic ID systems are set to replace varous other login credentials, all of which will remain valid until expiry – no later than September 30th, 2021.

These changes were scheduled under the ‘simplification decree’, a set of laws is aimed at streamlining some of Italy’s famously archaic bureaucratic processes and making certain services easier to access digitally.

The energy labels for electrical appliances are changing in Ialy and elsewhere in the EU, which is getting rid of the labels A+, A++ and A+++.

Instead, they will in future only range from G, for less environmentally friendly appliances, to A for very energy-efficient models.

At the same time, the classifications will be tightened. According to the European Commission, appliances which previously had the A+++ label will likely reach class C in future. The best class, A, will remain empty for the time being, so that manufacturers have room for improvement. 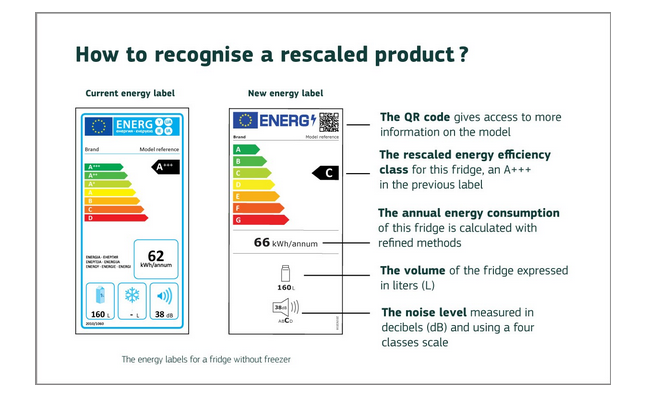