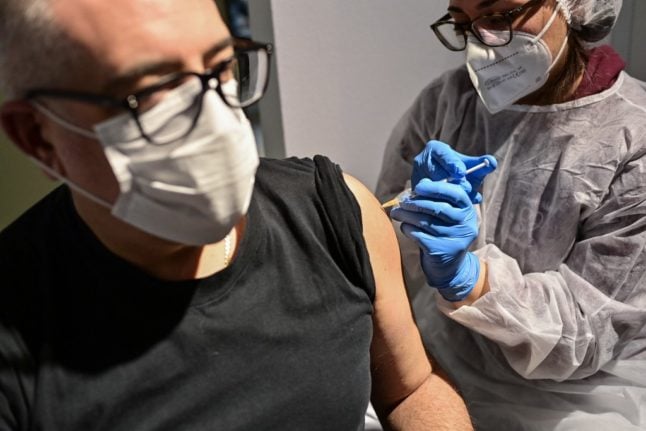 “We recently developed a mathematical model with the Higher Health Institute (ISS) and the Fondazione Bruno Kessler to see when we will be able to return to pseudo-normality,” Rezza told the Senate’s health and hygiene committee, according to Italian state broadcaster Rai.

READ ALSO: How and when can you get a Covid-19 vaccine in Italy?

“Assuming that the vaccine will protect from infection and that the vaccination is effective for at least two years, by vaccinating 240,000 people a day we will manage to return to normality in seven to 15 months.”

“This can be obtained with a high number of vaccinations and keeping up containment (of the coronavirus),” he said.

Under a recently-unveiled plan to speed up vaccinations in the coming months, Italy’s government says it aims to administer 56 million doses by June.

Italy is currently vaccinating around 110,000 people per day, and aims to increase this to 200,000 by the end of March for a total of 6.2 million doses this month,

To facilitate this acceleration, the government reportedly plans to increase the number of vaccination sites in Italy to 2,000. These are expected to be operational by April.

“Today vaccinations are increasing,” Rezza said. “The number of available doses will certainly increase in the second half of the quarter 2021.”

“We now have three (approved vaccines),” he added. “By April we will probably have the fourth and others will arrive in a few months.”

“In the second quarter of 2021 there will be many more doses than in the first quarter, and we will see the extension both of the number of vaccinators and of people who can be vaccinated.”

As hospital intensive care units are again coming under pressure, the government is also considering increased nationwide restrictions, from extending the current evening curfew to a national lockdown, according to media reports.

However, the government is reportedly split over what form of additional curbs to introduce.

Rezza stressed to the Senate committee the importance of controlling infections during the vaccine roll-out.

“Containing the most dangerous variants today and mitigating the progress of the epidemic is essential to protect the vaccination campaign,” he said.

“The variants are very insidious. We have estimated that the English variant alone results in an increase in transmissibility between 35 and 36 percent.”

“The Brazilian also slightly reduces the effectiveness of the vaccine. So it is necessary to counteract the variants in every way.”

“Containing and vaccinating is the recipe.”

Further studies need to be carried out before it is known precisely how effective the vaccines are, he said.

“We know that there is a high efficacy for most vaccines, but we do not know if they protect against the disease, or if they block transmission, which is important to know to understand if it can achieve herd immunity.”

“Furthermore, we do not know the duration of protection and the effect of variants on efficacy.”