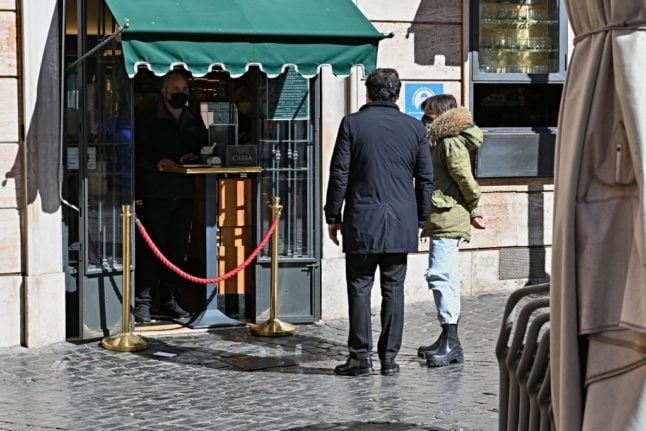 The Italian government announced on Friday that most of the country would effectively be under lockdown – in either the ‘red’ or ‘orange’ zone – following a fresh surge in infections.

Health Minister Roberto Speranza said he hoped the measures and vaccination programme would allow restrictions to be relaxed in the second half of spring.

“Each dose of vaccine injected is a step in the direction of the way out of the crisis,” he said on Sunday.

Despite immunisation programmes gathering pace, surges in infections remain a threat, and Italian authorities reimposed restrictions on three quarters of the country until April 6th to suppress an outbreak fuelled by a Covid-19 variant first detected in Britain.

The streets of central Rome were quiet Monday morning as the new restrictions took hold, which were sure to further bruise businesses already battered by a year of anti-virus measures.

“I didn’t expect it. We live from day to day,” said barista Ana Cedeno as she prepared take-out coffees for a few customers.

“We have lost a lot of money, because our customers have no money.”

All non-essential shops were closed from Monday, including in Rome and Milan, with residents told to stay home except for work, health or other essential reasons.

From Monday, every region with more than 250 cases per 100,000 inhabitants (according to official weekly health data) would be moved automatically into the highest-risk red zone, a spokesman for Prime Minister Mario Draghi’s office said.

New restrictions will be in place until at least Easter, when all of Italy would be under ‘red’ zone restrictions over the weekend of April 3-5, the prime minister’s office has confirmed.

The only exception to the restrictions is Sardinia, which is Italy’s only “white zone”.

On Friday, Draghi thanked Italians for their “infinite patience” and said the new measures would be accompanied by fresh support for families and businesses.

But he acknowledged there would be “consequences for the education of children, for the economy and also for the psychological state of us all”.

Ministers said enhanced measures were needed after weeks of rising numbers in most parts of the country.

The latest official health data on Friday showed that the critical Rt number (which shows the contagion rate) had risen again this week, from 1.06 to 1.16.

“The trend of the contagion curve shows the start of the third wave,” GIMBE head Nino Cartabellotta told Rai News.