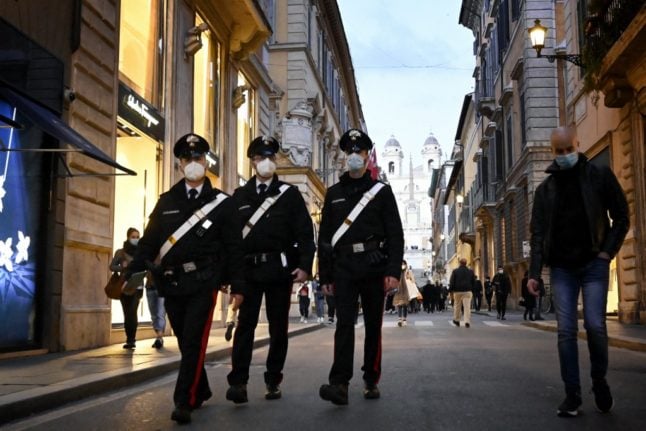 From Monday, schools, restaurants, shops and museums shut down as most of Italy becomes a ‘red’ or an ‘orange’ zone.

Every region with more than 250 cases per 100,000 inhabitants (according to official weekly health data) were automatically placed in the highest-risk red zone, a spokesman for Prime Minister Mario Draghi’s office said.

Most of the country turns red from Monday. There are seven regions under slightly less stringent orange zone restrictions, while Sardinia is the only low-risk ‘white zone’.

The new restrictions are in place until Easter, when the whole nation will be placed in a ‘red’ zone over the weekend of April 3-5, government officials have confirmed.

The Easter restrictions will not apply in white zones, the prime minister’s office confirmed on Friday.

The regional classifications from Monday are as follows:

A 10pm-5am curfew remains in place nationwide, and all non-essential travel between regions is banned.

Public transport is still running, including long-distance trains, though some routes may be suspended or operating on reduced schedules. Check with your transport provider for details before departing.

Here’s a look at how the rules differ between red and orange zones, according to the government’s latest decree released on March 13th. You can find the full text here (in Italian).

What are the rules in orange zones?

In orange zones, you can only travel within your municipality (town) and it is forbidden to move between municipalities unless for essential reasons.

If you leave your municipality, or travel within it during the 10pm-5am curfew, you must complete a self-declaration form justifying your movements.

Home delivery is still allowed, and takeaway is permitted until curfew at 10pm.

Museums and art galleries are closed.

All shops can remain open.

Hairdressers and beauticians can remain open.

Visits to the homes of family and friends outside your municipality are not allowed.

You can visit a second home within your region.

Schools remain open, but local authorities can order schools to close and to move learning online.

Some local red zones have been previously enforced in towns and provinces. Now, this may extend from a province to the entire surrounding region, For example, Bologna’s red zone will now expand to the whole of Emilia Romagna.

In addition to not being allowed to travel from one municipality to another, people in red zones are not allowed to move around within their own area unless for essential reasons, by either public or private transport.

You must justify any movements, including within your own municipality, using a self-declaration form.

You can only enter or leave an orange or red zone for urgent reasons, such as for work or health.

You cannot travel to any private home other than your own.

All schools in red zones are closed. Authorities may choose to enforce additional closures in orange zones.

Shops are closed except for those deemed essential, which include supermarkets and other food shops, tabacchi (tobacconists/newsagents), and pharmacies. Childrens’ clothes shops are also open.

Hairdressers and beauticians are closed.

All team sports activities are suspended (solo exercise such as running or walking is allowed).

Travel to a second home is allowed only if you can prove you had the right to enter the property (as owner or tenant) before January 14th 2021. This means new short-term rentals are not allowed, and you can’t stay with relatives. “The house of destination must not be inhabited by people not belonging to the family unit”, according to the health ministry.

Visits to relatives and friends are not allowed, even within your own municipality,

Exceptions to this rules are made for Easter in red zones. You can move within the region between 5am and 10pm to visit friends and relatives, once a day. A maximum of two people, plus children under 14, are allowed to move in this way from April 3-5, the Italian health ministry confirmed in a statement.

The health ministry notes that individual regions or provinces may set their own additional restricions on top of these national rules, and the details can be found on your local authority’s website.

Find out where to get the latest information for your local area here.

Please note The Local is not able to advise on specific situations.  For more information on the restrictions please see the Italian Health Ministry’s website (in English).