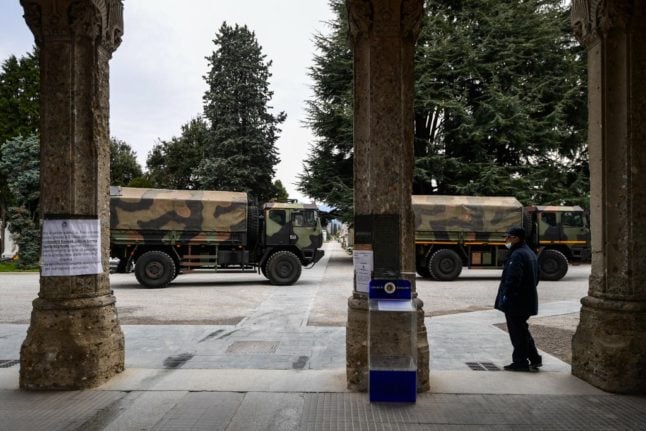 Draghi travelled to Bergamo, the northern province that became Europe’s first major virus flashpoint a year ago, for Italy’s first annual day of mourning for the dead.

“We cannot hug each other, but this is the day in which we must all feel even closer,” he said at the inauguration of a memorial park near the main hospital in the city of Bergamo.

“This place is a symbol of the pain of an entire nation,” he said, before witnessing the planting of one of the park’s planned 850 trees to the mournful sounds of a trumpet.

Earlier, Draghi laid a wreath at Bergamo’s cemetery and observed a minute of silence, while across the nation flags flew at half mast from all public buildings.

Italy chose March 18th for its coronavirus remembrance day to coincide with the day in 2020 when the army had to step in to carry away scores of coffins from Bergamo’s overwhelmed crematorium.

At the height of the pandemic last year, Father Marco Bergamelli was blessing coffins every ten minutes.

“This place was full of coffins, there were 132 lined up at the foot of the altar,” he told AFP, opening the doors of the church at the monumental cemetery. “At the beginning, the trucks came at night, nobody was supposed to know the coffins were being taken elsewhere.”

READ ALSO: ‘Here is the Italy that has suffered’: Bergamo holds requiem for coronavirus dead

The camouflaged vehicles took away up to 70 coffins a day from the church, where they were collected after the local mortuaries filled up. The coffins were transported to cemeteries in other northern cities such as Bologna and Ferrara.

Many of the bodies that remained in Bergamo were buried in haste, often without headstones but with signs bearing photos and names of the deceased.

Almost everyone here lost a member of their family, a friend, colleague, or neighbour.

ICUs are full once again

“People saw their loved ones leave in an ambulance with a fever, and they were returned as ashes in an urn, without ever being able to say goodbye,” said Bergamelli, 66.

A grim sense of deja vu pervades the area, as the city is once again locked down along with most of the country amid a fresh wave of infections.

At the Seriate hospital east of the city, the intensive care unit is once again at capacity, its eight beds occupied by coronavirus patients, even if numbers are lower than last year.

“Covid is more aggressive now, with many cases of the new English variant,” said Roberto Keim, the unit’s director.

‘The people of Bergamo felt abandoned’

There are many here who criticise authorities for acting too slowly to recognise the scale of the crisis last year and not imposing swift restrictions to stem the virus’s spread, including banning gatherings.

“At the beginning of March, we saw people going to funerals for victims of Covid, and themselves dying a few weeks later,” said Roberta Caprini of the Generli Funeral Home.

The 38-year-old was left to manage unprecedented demand for the family business after her father and uncle both contracted coronavirus. They later recovered.

To allow relatives in quarantine to say their final goodbyes, Caprini had the hearse pass underneath their balconies, and took photos of the dead herself.

But proper mourning was impossible for many. “We spent a month not knowing where my father’s body was,” said Luca Fusco, recalling the 85-year-old’s death in a care home on March 11th 2020.

READ ALSO: How are countries across Europe faring in the battle against Covid-19?

Fusco’s son Stefano created a Facebook group demanding justice for the dead, which now has 70,000 members.

The group “Noi Denunceremo” (We Will Denounce), led by Luca Fusco, has already filed more than 250 complaints with prosecutors over the way authorities handled the Covid crisis. A judicial enquiry is underway.

It took two weeks after the first cases appeared in the province on February 23rd last year for the authorities to lock down the entire Lombardy region, a measure extended one day later to the whole of Italy.

Fusco claims nobody wanted to shut down a region that is the engine of Italy’s economy.

“The people of Bergamo felt abandoned. In acting sooner, the authorities could have saved thousands of lives,” he said.

READ ALSO: How will Italy’s Covid-19 strategy change under the new government?

The prime minister also promised no let-up in an ongoing drive to scale up national vaccination efforts, despite the current controversy over the AstraZeneca vaccine.

The European Medicines Agency (EMA) was due to clarify on Thursday whether the vaccine is safe after unproven accusations of links to blood clots led to its suspension in much of Europe this week.

“Whatever its decision, the vaccination campaign will continue with the same intensity, with the same objectives,” Draghi said, expressing confidence in ramped-up vaccine supplies.

Italy’s government has set a target to triple vaccinations to 500,000 per day by mid-April, and to fully vaccinate 80 per cent of the population by mid-September.

At the same time, it put much of the country back into lockdown on Monday to contain a third wave of the virus that has put hospitals under renewed stress and claimed 431 lives on Wednesday alone.