Police presence will be increased over the Easter weekend. (Photo by Alberto PIZZOLI / AFP)

The Italian government will put an extra 70,000 police officers in the field over Easter in a move to intensify controls and checks.

Areas deemed as the highest risk of spreading Covid-19 are particularly targeted: parks, the coast, stations, streets, highways, ports and airports are all placed under extra surveillance.

“This is not the time to lower our guard, and to let go of that sense of responsibility shown so far – because the progress recorded by the campaign for vaccines finally give a glimpse of a different horizon that will allow us to gradually return to normal,” Italy’s Interior Minister, Luciana Lamorgese, told newspaper Il Messaggero.

“In this very delicate social context, the police forces continue to carry out a careful vigilance and for this I want to thank all the men and women engaged with professionalism in our cities,” she added.

The Ministry of the Interior confirmed the plans on Thursday, who agreed more stringent measures were needed to enforce citizens to comply with the rules of the red zone.

Speaking at the National Committee for Public Order and Safety, Lamorgese said the monitoring throughout the country is “rigorous” but balanced.

The boost in police presence aims to ensure people don’t bend the slight amendment to the red zone rules over the Easter weekend.

From April 3-5th, people across all of Italy are allowed to move within their region to visit friends and family once a day, between 5am and 10pm. Travel is limited to two adults plus children under 14.

The decision to bolster police checks came after examining the state of public safety and the effects Covid-19 has on the economy.

It’s not the first time Italy has increased security over a national holiday. All major holidays have been granted distinct rules since the pandemic broke out in Italy just over a year ago. Christmas and New Year 2021 saw the country move in and out of lockdown in a bid to curb the spread of the virus at peak times of movement.

READ ALSO: UPDATE: What are Italy’s rules for travel over Easter?

The police, in conjunction with military operation “Strade Sicure” (Safe Streets), are deployed to Covid-19 hotspots to implement the national lockdown measures. This has also included stepping up checks in areas particularly affected by the virus such as Bergamo.

Some regions face further levels of restrictions. In Tuscany, several cities will see reinforcements with access to beaches denied and entrances to the coast blocked. Liguria, meanwhile has forbidden using boats over the Easter weekend.

READ ALSO: Italy to remain in partial lockdown until end of April 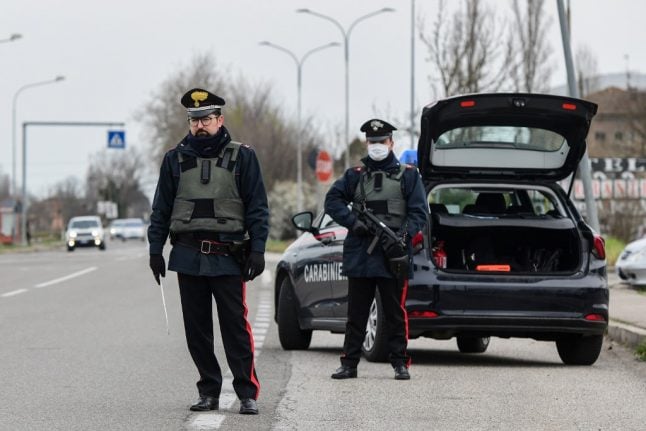 Armed Italian Carabinieri police officers at a road checkpoint. File photo: AFP
The high-speed chase began after the driver was stopped by traffic police on the A1, the motorway between Rome and Florence, at noon on Tuesday.
He attempted to evade police by reversing, driving the wrong way down the motorway and breaking through a toll booth before being brought to a halt by police, local media reports.
Police set up a road block at Calenzaro, north of Florence, where they rammed the suspect's vehicle with a patrol car to bring it to a halt. Armed Carabinieri officers then fired several shots at the car’s tyres.
No one was injured in the incident.
Police then discovered an axe, knife, scythe and camping gear in the suspect’s car.
The man, who reportedly lives in Vicenza and has American citizenship, was arrested and faces several charges including the unjustified possession of dangerous items.
SHOW COMMENTS