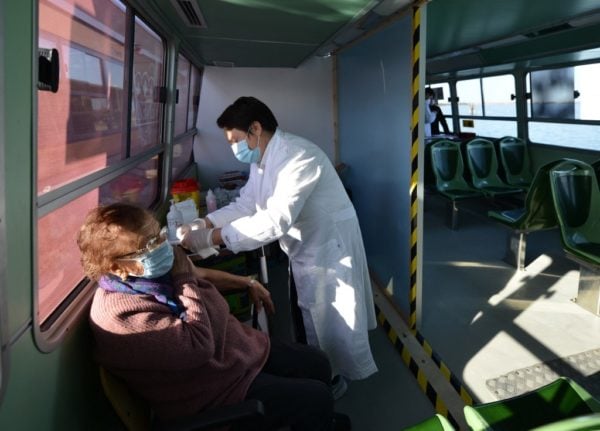 Venice began vaccinating some of its elderly residents on a vaporetto on Easter Monday, using one of the sturdy, public water buses that are the most convenient method of transport in the city as a floating clinic.

The one-day-only vaccination site was designated for residents over the age of 80 who reside on two islands in the Venetian Lagoon: Sant’Erasmo and Le Vignole.

READ ALSO: What are Italy’s rules for travel over Easter?

Given the relative remoteness of the islands, it made more sense to bring a vaporetto clinic to the elderly residents rather than making them travel to another island, health officials said.

“(The initiative) has the dual objective of getting citizens used to the idea of vaccination, through this unusual form of service, and to offer those elderly people for whom it would be more difficult to get around the possibility of doing it a short walk from home,” said the city of Venice in a statement.

As Italy’s vaccination campaign is underway, some unusual venues are being used to administer the jabs. Outside Naples, some people have headed to the Capodimonte Museum, where reproductions of its masterpieces – including the reclining nude figure of the princess Danae by Titian – are hung in the vaccination waiting room.

Monza’s historic race track north of Milan, home of the Italian Grand Prix, was also being used for jabs for the masses this weekend.

Inside the vaporetto, a small table and chair were installed in one corner and cordoned off for privacy. Those with vaccine appointments waited on shore in seating areas under outdoor canopies for their appointments, before being invited on board for the jabs.

“It was pretty neat,” said Mario Cavagnis, a local resident who received his first AstraZeneca shot. “It’s a normal vaporetto, they just created a little clinic.”

In Venice, which welcomes millions of visitors each year, tourism is responsible for between 28 and 40 percent of garbage production depending on the season, according to local government data – including piles and piles of plastic water bottles.

To combat the waste, local authorities are promoting the use of refillable water bottles by calling tourists’ attention to the vast network of drinking water fountains dotting the squares and alleys of the floating city.

“In the historic centre, there are 126 fountains spread over the area, they’re easy to find, there’s one nearly every 100 metres (330 feet),” said architect Alberto Chinellato in his city hall office overlooking the Rialto Bridge.

To make things even easier, water distribution company Veritas has launched an app and website showing a map with all the nearest fountains.

Leaving Chinellato’s office, AFP observed an empty plastic water bottle bobbing between two gondolas on the Grand Canal – underscoring that the battle against plastic is far from being won.

At the centrally located Hotel Flora, owner Gioele Romanelli has also decided to contribute to the crusade against plastic by educating his guests.

READ ALSO: What is it with Italians and bottled water?

“We simply had a card printed on which we pointed out the fountains of Venice with a little blue drop,” said Romanelli, proudly displaying a copy on a small bistro table.

“Not only with a refillable bottle, but also by recycling a small (plastic) water bottle you can keep all day,” said the 49-year-old hotelier.

At check-in, guests are briefed about Venice’s “good water”.

“They are sometimes surprised to learn that the water in Venice is drinkable,” he said.

“With this small gesture, our customers can actively participate in the battle against plastic,” he said, seeing it as a way, in a city with “an insane number of tourists”, to give them a certain sense of responsibility.

In addition to the card marking the city’s fountains, the hotel has done away with single-dose shampoo and shower gel bottles in the rooms in favour of refillable dispensers.

At breakfast, plastic is a thing of the past, with the hotel now using small glass containers for muesli, dried fruit and yogurt, Romanelli said.

READ ALSO: How will the tourist-control system work in Venice?

Venice is quickly recovering its tourist traffic following the coronavirus pandemic. But after reaching a total of 5.5 million visitors in 2019 – eclipsing the city centre’s 50,000 inhabitants – officials are trying to limit arrivals.

From January, day visitors will pay a tax that they’ve been able to avoid until now by not staying overnight.

The ‘tourist tax’ will be charged at between 3-10 euros (around $3-$10) depending on the time of year, and will be payable online.

It will provide visitors with a QR code to be shown at the various entry points to the historic centre.