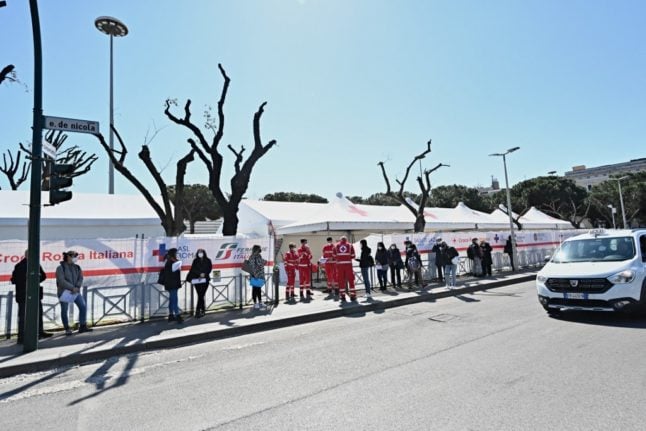 People line up outside a vaccination hub in Rome. Photo: Andreas Solaro/AFP

When Mario Draghi was sworn in as Italy’s new prime minister just under two months ago, one of his first stated priorities was to increase the pace of the country’s Covid-19 vaccination programme.

Italy was at the time administering just over 100,000 doses per day. Draghi’s new head of the coronavirus response taskforce, General Francesco Paolo Figliuolo, soon announced a target of 300,000 jabs a day by the end of March, and 500,000 by the end of April.

There were high hopes that, after supply delays and a month-long political crisis early this year, the campaign was about to move up a gear.

But over a month since the new targets were announced, and 100 days since the country’s vaccination campaign began, there’s no sign of it speeding up significantly amid ongoing setbacks and delays.

In total, some 11.5 million doses have been administered to date, and 3.5 million people in the country have received both doses (or 6.8 percent of the population over 16) according to the latest official figures.

While Italy’s vaccine campaign is progressing similarly to those in other EU member states, the slower-than-hoped pace of the vaccine rollout is causing high levels of frustration in the country, as the death toll remains notably high, and lockdown restrictions have been extended until at least the end of April.

There have been some 240,000 doses administered on average per day in Italy in recent weeks – more than double the number recorded a month ago.

But this is still some way from the stated goal of 300,000 a day, and the goal of half a million is looking increasingly unrealistic.

The vaccine campaign suffered an abrupt slowdown over the Easter weekend, with fewer than 500,000 doses administered nationwide over three days in total.

Italian media reports on Tuesday slammed the weekend slowdown as an “Easter vaccine flop”, while professor of virology Roberto Burioni commented: “we assumed everyone knew that the virus does not observe holidays. We were wrong”.

Some health experts said more staff were needed at vaccination centres, while others pointed to problems with organisation in some regions.

According to Italian newspaper La Repubblica, regional health authorities say the target isn’t being met due to an ongoing shortage of doses, as supply delays continue to affect vaccination campaigns around Europe.

However, the national government says regional health authorities currently have between 2.3 and 2.9 million doses in storage, ready to be administered.

Delays across the country have reportedly been aggravated by the Italian medicine agencies’ decision to halt injections of the AstraZeneca vaccine for several days in March amid concerns about potential rare side effects.

AstraZeneca jabs resumed after EU regulators re-confirmed they were “safe and effective”, but some health experts say the temporary block has dented public confidence in the vaccine in Italy – where vaccine scepticism was already relatively high.

In Naples alone, hundreds of people have asked their vaccination centre to delay their shot until Pfizer becomes available, the Ansa news agency reports.

Meanwhile in Cagliari, Sicily, around 20-30% of those booked for an AstraZeneca shot are failing to show up for appointments.

This is “further slowing vaccinations in one of the worst performing regions, which vaccinated just 39 people over Easter”, Ansa writes.

IN CHARTS: Which regions of Italy are vaccinating people fastest?

As many of those who were scheduled to get the AstraZeneca jab were teachers, the cancellations and delays could also jeapordise Italy’s plan to reopen schools as a priority – and keep them open.

There are also fears that the slow pace of vaccinations for the elderly may be driving the death toll in Italy, which remains markedly higher in Italy than in neighbouring European countries, and is rising more sharply than in countries where vaccines are being distributed more quickly, like the US and UK.

Italy is not administering fewer doses than other large European countries (not including the UK), but its low rate of vaccinations for over-70s is believed to be “a decisive factor in a nation with the highest average age of all”, Ansa writes.

There have also been major discrepancies across the country in terms of vaccinating the over-80s, in part due to the fact that each region manages its own health service and can set its own vaccination schedule.

The percentage of people over-80 who have been fully vaccinated ranges from almost 60 percent in South Tyrol to 14 percent in Sardinia, according to data analysis by the GIMBE independent evidence-based medicine foundation.

Meanwhile, some regions, including hard-hit Lombardy, have suffered setbacks due to problems with their booking systems.

Despite all this, Figliolo remains confident that Italy could still reach its targets soon.

“In two weeks we will be at 300,000 doses per day,” he told newspaper Corriere della Sera on Tuesday. “In April there will be a consistent arrival of vaccines, with the verification of the capabilities of vaccinators and vaccination points.”

“If the system holds up, and means we have 500,000 vaccinations a day at the end of the month, I will close the campaign at the end of September.”

The Italian campaign is expected to get a boost from April 19th, when the Johnson and Johnson one-shot vaccine should become available.

However, the number of doses expected to arrive in April will be around 8 million, according to Italy’s health undersecretary Pierpaolo Sileri – even less than the 8.2 million delivered in March.

On a more positive note, six million of those doses will reportedly be Pfizer, which should resolve the issue with delays caused by concern about AstraZeneca.

But clearly eight million doses will not be enough for the 500,000 doses a day expected under the national plan – even in addition to the 2.3 million or more doses currently in storage.

Silari added that the number of doses arriving will “double” in May.

So when will Italy’s vaccination campaign reach a point that allows the reopening of public life?

“Having 20 million people vaccinated as soon as possible will be a first important turning point in terms of reducing new cases,” according to Massimo Andreoni, scientific director of the Italian Society of Infectious and Tropical Diseases (Simit).

Davide Tosi, a researcher at Lombardy’s University of Insubria, told Sky Tg24 news on Tuesday: “To substantially reduce infections it would take 45-50% of the population vaccinated even with a single dose, plus the three million people recorded as being recovered,”

“At this rate, however, we will only have a sufficient percentage of the population vaccinated at the beginning of next year.” 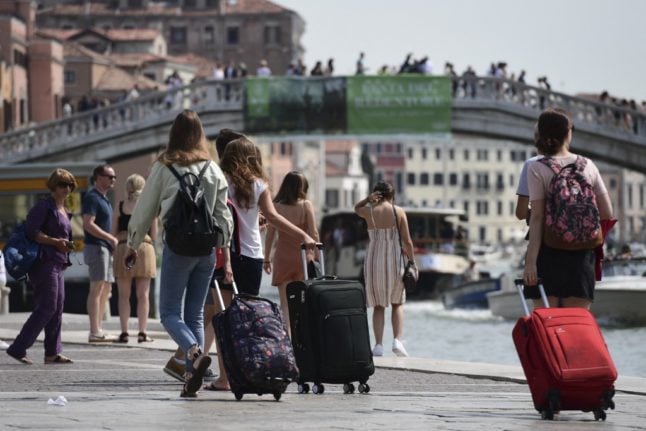 TRAVEL NEWS
Will tourism in Italy return to pre-pandemic levels this year?