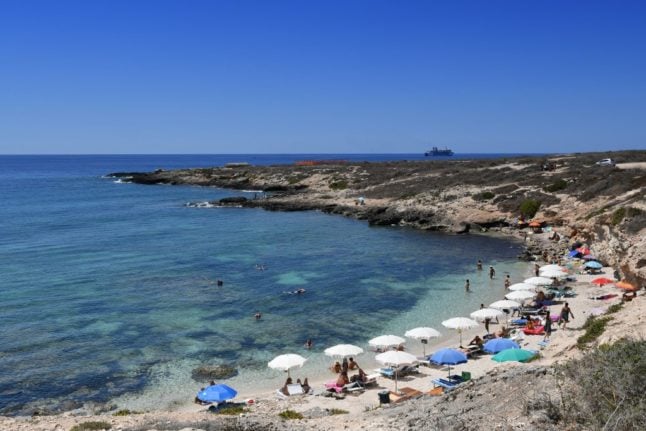 The Italian island of Lampedusa, Sicily, is set to be among those included in the vaccine plan. Photo by Alberto Pizzoli/AFP

Italy could soon prioritise giving jabs to all residents of holiday islands, according to media reports, after local mayors pushed for the country to copy a tourism-focused vaccine programme underway in Greece.

The ‘Covid-free islands’ vaccination plan, which means vaccinating everyone living or working on the smaller Italian islands where tourism is the main industry, was suggested after Greece said it would soon have the residents of all its famed holiday islands vaccinated.

The programme would reportedly focus on smaller islands in the southern regions of Sicily and Campania, including Ischia, Capri, and Procida, the Aeolian, Egadi and Pelagie islands, as well as Puglia’s Tremiti islands and Tuscany’s Elba.

Meanwhile, the presidents of the large island regions of Sardinia and Sicily have also asked the government to vaccinate their entire populations as soon as possible “due to their large tourism industries”.

Italian newsaper Il Messaggero on Monday reported that emergency commissioner General Francesco Figliuolo had accepted the proposal to begin the vaccination of all inhabitants of the smaller islands from the end of April.

However, the government has not officially announced this, despite the tourism ministry giving some positive signals last week.

“We could do it. There is an open table,” Tourism Minister Massimo Garavaglia told reporters when asked if the government would approve the plan.

He said the government is hoping to make travel “simple” and that this suggestion “seems clear enough to me”.

But not everyone is happy with the idea.

The president of the Emilia-Romagna region, Stefano Bonaccini, said island tourist destinations “cannot be prioritised at the expense of others”, while Massimiliano Fedriga, president of Friuli-Venezia Giulia, said the vaccine rollout should be “equal” otherwise “social tensions” could flare.

The island vaccination plan has also faced criticism from some health experts on Monday.

Milan-based researcher Matteo Villa said on Twitter that the plan was “illogical” as it would mean “doses wasted on a young population, when they could be used on elderly people”.

Italy’s government has not yet given a firm date for restarting holiday travel in summer, though Garavaglia last week suggested June 2nd.

The news of the new plan comes just days after Italy’s government pledged to prioritise vaccinating all over-75s, amid accusations that the national plan has so far prioritised the wrong groups, leading to a higher death toll among vulnerable elderly people.

For now, Italy’s vaccination rate remains slower than expected while the country continues to report a higher death toll than neighbouring European countries.

Part of the hold-up is believed to be due to some people who are eligible for the vaccine refusing to take AstraZeneca after public confidence in the jab was shaken by reports linking it to rare blood clots, and by a series conflicting recommendations on its use.

On the island of Sicily, up to 80 percent of people booked for the jab are reportedly refusing to take it.

Meanwhile, Sardinia had already introduced additional testing for all arrivals under plans intended to make the island a safe haven for tourists, after it was declared Italy’s first and only low-risk Covid ‘white zone’ earlier this year due to its falling infection rate.

However, the island’s residents are now effectively back under lockdown as Sardinia was again designated a high-risk ‘red zone’ from Monday.

For now, tourism remains impossible across Italy due to strict international and domestic travel restrictions and closures affecting most businesses. All museums and attractions remain closed.

Non-essential travel into Italy remains heavily restricted for most non-EU countries, and testing and/or quarantine is a requirement for all arrivals.

The whole of Italy remains under tightened restrictions until at least the end of April, with all non-essential travel between towns and regions forbidden and a nightly curfew in place.

Find more information about travel to or from Italy on the Health Ministry’s website (in English).