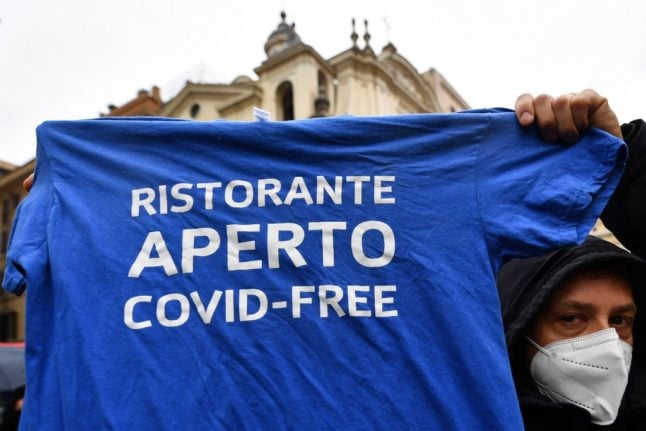 A protester in Rome holds a t-shirt reading "Restaurant Open, Covid-Free" at a protest against closures on April 12th. Photo: Alberto Pizzoli/AFP

The Italian government is meeting on Friday to discuss plans for relaxing the country’s coronavirus restrictions.

Italy’s regional leaders on Thursday approved a set of guidelines for the planned reopening of restaurants, bars, shops, gyms, cinemas and theatres – however no date has yet been confirmed for easing restrictions.

The proposed new rules maintain a lot of restrictions, including on contact sports.

Plans include reopening cinemas and theatres with a two-metre distancing requirement, or one metre if face masks are worn.

They also suggest stopping restaurants and bars with seating from serving drinks at the bar after 2pm.

But the new rules have yet to be approved by the government, and it is not yet known when each type of business might be allowed to reopen.

Italian Health Minister Roberto Speranza suggested on Tuesday that the current coronavirus restrictions may be eased significantly next month.

While stressing that it’s not yet possible to give any firm dates for reopening, Speranza said that the numbers are improving and that “presumably May will be a month of reopenings”.

He was speaking at a meeting with trade union representatives on Tuesday following a series of protests held in Rome and other Italian cities by business owners and employees demanding an end to closures across the country.

“A decision on the reopening will probably be made next week by the Council of Ministers”, the Minister for Economic Development, Giancarlo Giorgetti, told the meeting.

The whole of Italy remains under tightened restrictions, with bars and restaurants only allowed to open for take-away and delivery, and hairdressers and most shops closed in the highest risk ‘red’ zones. Across the country, gyms, cinemas and museums remain closed.

Meanwhile, all non-essential travel between towns and regions is forbidden and a nightly curfew in place from 10pm.

The government has said the current restrictions will stay in place until at least the end of April,

Business groups and regional leaders however continue to push for the government to ease some restrictions sooner, including on regulation of the restarting of gyms, cinemas, theaters and museums is also envisaged.

Italy’s tourism minister last week proposed June 2nd as a possible date for allowing non-essential travel to restart, though this has not been officially confirmed, and no further details were given.

Speranza meanwhile said he “hopes” Italy will adopt the European health passport by June, news agency Ansa reports, saying the scheme was “important to give greater confidence in travel and mobility.”

However, he said it was “premature to talk about reopening discos”.

“Let’s not forget what happened last summer,” he said, apparently referring to the abrupt closure of nightclubs and tightening of rules on mask-wearing in mid-August 2020, as a fresh rise in cases in Italy was partly attributed to international travel and crowds of partying holidaymakers.

READ ALSO: Which travellers have to quarantine in Italy and for how long?

The suggested timeline for reopening this year would be similar to that followed in 2020, when rules were gradually lifted throughout May following a strict lockdown lasting almost three months.

Last year’s reopening of tourism and other businesses was possible, ministers said, as Italy stepped up its test-and-trace efforts and recorded a drastic reduction in the number of coronavirus transmissions.

But at the moment, as Italy’s vaccine roll-out continues to falter and the death toll remains higher than in neighbouring European countries, health experts warn that conditions are not right for reopening.

Medical workers’ unions wrote to the government this week to urge caution, saying “any premature relaxation of restrictions could put the lives of Covid-19 patients at great risk”.

“A slowdown of the restrictions will only be possible if daily infections remain below 5,000 cases, while maintaining a large capacity for testing, and resuming contact tracing to control the spread of the epidemic,” their recommendation read. “Hospitalizations would need to be far below the critical thresholds, and vaccinations completed at least for frail subjects and those over 60, the categories at the highest risk of hospitalization and mortality.”