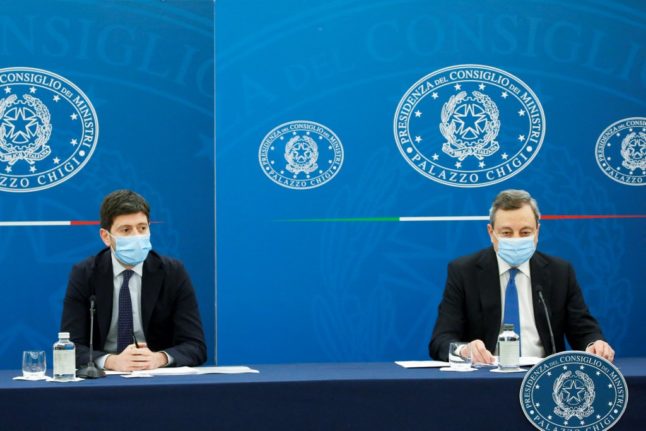 Many of Italy’s current restrictions will be gradually relaxed from April 26th, Italian Prime Minister Mario Draghi confirmed at a press conference on Friday afternoon.

The lower-risk ‘yellow’ zone classification will return from this date, he said, alongside the orange and red zones currently covering the whole country.

Schools and “open-air business activities” will be the priorities for reopening, he said.

All schools and universities will resume in-person teaching in yellow and orange zones.

Restaurants will be allowed to reopen in yellow zones, for both lunch and dinner – with outdoor seating only.

“The first key date is April 26th, with the restoration of the yellow zone,” said health minister Roberto Speranza.

“Then from May 15th the idea is that the outdoor pools can reopen, from June 1st gyms, from July 1st we can imagine (the restart of) trade fairs.”

However, he said the government could not promise a date in which the economy would fully reopen.

“It would not be honest,” Speranza said.

The government is under pressure to ease restrictions after a string of protests, some of which turned violent, from a wide range of groups, from entertainment workers to restaurant owners.

“These measures are a response to the sufferings of many,” Draghi said, adding that they “bring greater serenity in the country and lay the ground for the relaunch of the economy”.

Travel will be once again allowed between yellow zone regions, Draghi stated. Currently, non-essential travel between all regions is banned.

Many restrictions are to remain in areas designated higher-risk red and orange zones.

Draghi added that it was necessary for “correct behaviours to be scrupulously observed, such as masks and distancing”.

The prime minister did not mention any plans to relax current restrictions on international travel at this point.

The announcement came after a meeting on Friday between Mario Draghi’s government, the Higher Health Institute and the Scientific Technical Committee, which advise ministers on health restrictions.

The health minister later on Friday is also expected to announce some changes to the zone classifications based on the latest health data, as the national average Rt number (which shows the infection rate) fell again to 0.85, from from 0.92 last week.