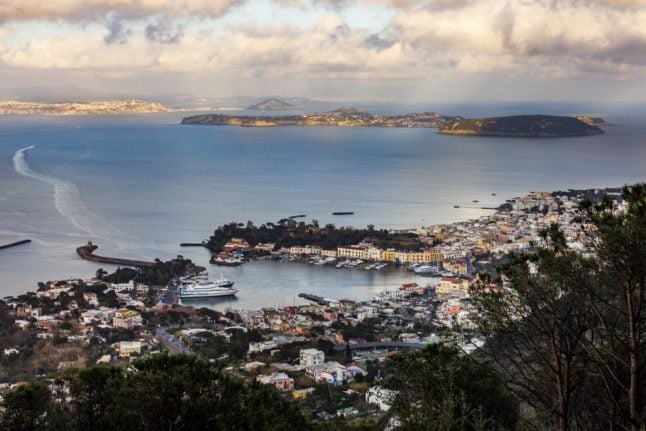 Mass vaccination is underway on the islands of Procida (back) and Ischia (front) in Campania. Photo: Laurent Emmanuel/AFP

The mayor of Procida declared it Italy’s first “Covid-free island” after a four-day vaccination campaign that saw over 90 percent of its 10,000 inhabitants get a shot.

The island in the Bay of Naples, Italy’s capital of culture for 2022, was prioritised not for the sake of tourists but for locals, stressed mayor Dino Ambrosino: “Small islands in Italy are fragile territories that often have limited health services.”

Italy’s Covid-19 emergency commissioner, General Francesco Figliuolo, gave the go-ahead for further mass vaccination campaigns on isole minori (small islands) at a meeting with local mayors on Wednesday, according to reports, starting with those where health services are scarcest.

Mass vaccinations are already underway on Procida’s neighbouring islands of Capri and Ischia, while Sicily plans to begin campaigns on its outlying islands this weekend with the goal of getting several of them fully vaccinated within a fortnight.

The Pontine islands off the coast of Lazio, the Tremiti in Puglia, Capraia and Giglio in Tuscany, and the Maddalena archipelago off Sardinia are also aiming to vaccinate all residents in the coming weeks.

Mayors of Italy’s dozens of small islands, which altogether have a permanent population of a few hundred thousand but can host several times that in summer, have been pushing for blanket vaccination before Italy invites tourists back.

The call for ‘Covid-free islands’, inspired by Greece’s decision to vaccinate residents in its holiday hotspots in time for peak season, has been criticised by regions on the mainland as an unfair use of Italy’s limited doses, with the country still struggling to vaccinate its elderly population.

READ ALSO: ‘We need ammunition’: Jabs for over-60s postponed as Italian regions run out of doses

Commissioner Figliuolo agreed to allocate resources for mass vaccination on small islands providing that islands with the highest infection risk and fewest health facilities be prioritised, according to accounts of Wednesday’s meeting.

The mayor of the Sicilian island of Lampedusa, which is due to open all vaccinations to all adult residents from Saturday, insisted that safety, not tourism, was the primary factor.

“It’s not about saving the tourist season here. It’s a question of protecting public health. The population of Lampedusa has a shortage of health services, there’s no hospital and to get to Porto Empedocle takes eight hours by boat,” said mayor Toto Martello.

The move does not mean that Italy has decided to prioritise vaccines for its tourist hotspots. National priority categories remain in place that mean only older people or those with serious health conditions can currently get vaccinated in most parts of the country – though regions have a certain amount of discretion to set their own vaccination plans.

Sicily in particular has found itself with thousands of unused doses of the AstraZeneca vaccine, after two people in the region died soon after they received the jab. While neither death is confirmed to have been caused by the vaccine, the incidents have contributed to hesitancy and left Sicily the region with the lowest percentage of doses delivered actually administered: around 75 percent, compared to a national average of 82 percent.

Regional governor Nello Musumeci has been pushing to make doses more easily available, including offering jabs to over-60s without appointments for a limited period and now opening vaccinations on small islands even to young, healthy adults.

The government is inviting vaccinated or tested visitors back from mid-May via a Covid-19 green pass that certifies either full vaccination, antibodies or a recent negative test result.

“The world wants to travel to Italy, the pandemic has forced us to close, but Italy is ready to welcome back the world,” Prime Minister Mario Draghi declared this week. “It’s time to book your holiday in Italy, we can’t wait to welcome you again.”

Find all our latest news updates on travel to, from and within Italy here.