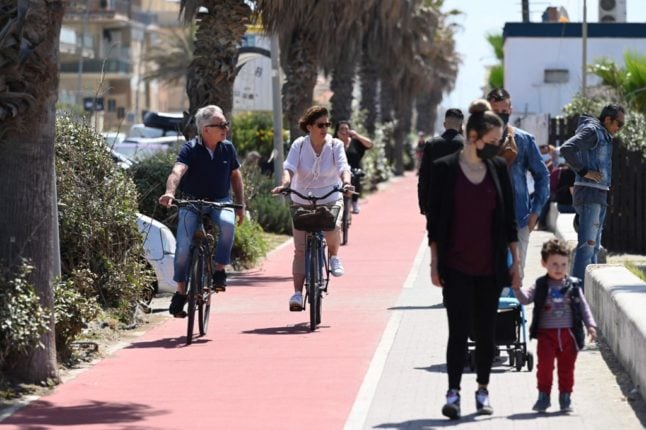 As of Monday May 17th, all but one region are in the lower-risk yellow zone as Covid-19 cases continue to fall.

The government has already outlined a timetable for reopening the country over the coming weeks, and is expected to add to it if the numbers keep improving.

Further loosening of the rules should be confirmed by Friday May 21st, the day Italy’s health watchdog releases its next weekly report, with changes taking effect as soon as that weekend..

While the government is scheduled to discuss the next phase of reopening on Monday, including the guidelines for weddings, here are the areas in which changes have already been announced or are expected to follow.

Shopping malls, which currently are allowed to open on weekdays only, will be open on weekends again, the government confirmed in its last update in late April.

Lidos, beach clubs and and outdoor pools are also to reopen in mid-May, with some safety restrictions still in place, including limits on the number of customers allowed.

Mid-May: End of quarantine for visitors from the European Union, UK or Israel

Italy’s government on Friday said it was scrapping quarantine requirements for visitors from the European Union, Britain and Israel who test negative for coronavirus.

Visitors from those countries have until now been required to undergo a five-day quarantine and two coronavirus tests.

Dropping the quarantine is a move hoped to entice tourists ahead of the summer season, though beyond the requirement to show a negative test result, no further details of the requirement for travellers have yet been made available.

May 18th: Curfew extended to midnight?

One of Italy’s most hotly contested containment measures, especially now that restaurants have been allowed to open for dinner, is the nightly 10pm curfew.

The right-wing League and its allies have been pushing the government to relax the curfew or even scrap it altogether, though Health Minister Roberto Speranza has so far remained cautious.

Among the proposals being considered is pushing the curfew back to 11pm or midnight, a change that could come into effect from early next week if the latest health report is encouraging. Prime Minister Mario Draghi is expected to announce a decision after meeting the cabinet on Monday May 17th.

One of the most significant changes that regional governors are calling for is a shift in the way the health ministry classifies which parts of Italy are yellow, orange or red zones.

While each region’s risk level is currently calculated based on multiple factors including incidence rate and Rt (transmission) number, regional authorities also want the number of people vaccinated to be taken into consideration. Regions that have vaccinated a large percentage of their elderly and at-risk residents could thus offset other risk factors, making it easier to remain in the lower-risk yellow zone.

Alternatively the government could revise its rule that regions with an Rt over 1 automatically become orange zones, and regions over 1.25 go red.

If the health ministry agrees to the change, it could apply from the following time it reviews the regional classification – typically Friday afternoon after the health watchdog releases its weekly report.

Gyms and other indoor fitness facilities and will have to wait until June to reopen, and then only in yellow zones, the health minister has confirmed.

Sports facilities will have to follow safety guidelines, including limiting the number of people allowed to exercise at once, requiring face masks in communal areas and asking users to book training in advance.

Indoor swimming pools are also hoping to be allowed to reopen from June on the same basis.

Bars and restaurants can also serve patrons indoors from this date – but only from 5am to 6pm, so dinner service will only be allowed outdoors.

Cafes are hoping the government will also introduce an exemption to the rules that mandate table service only, thus freeing them to return to serving coffee to customers standing at the bar.

Stadiums meanwhile will reopen to the public at 25 percent capacity. The number of spectators, however, cannot exceed 1,000 in open-air venues and 500 in indoor venues.

Mid-June: End of quarantine for visitors from the United States?

Under new rules that come into force from Sunday, Italy will extend so-called “Covid-free” flights, currently in place to and from the United States, to Canada, Japan and the United Arab Emirates.

Italy also wants to ditch quarantine for tourists from the United States, Canada and Japan, if they have been vaccinated, Italian Prime Minister Mario Draghi has said.

READ ALSO: When will Americans be allowed to travel to Italy again?

In fact quarantine could be scrapped for any country that has vaccinated the large majority of its population, an option that is expected to be discussed at a meeting of G7 health ministers in the second week of June.

The government is scheduled to discuss wedding protocol in accordance with Covid-19 regulations at a steering committee on Monday.

While Draghi has advised couples planning their big day to “keep patient”, there is speculation that receptions will be allowed to go ahead from mid-June – although only in yellow zones.

READ ALSO: Reader question: ‘Can our wedding in Italy go ahead this year?’

Guests will have to sit outdoors, maintain social distance and wear face masks, according to safety guidelines already agreed upon with regional authorities.

Mid-June: No more face masks outside?

The government will consider relaxing the rules on wearing face masks outdoors when at least half the population – some 30 million people – have received at least one dose of a Covid-19 vaccine, according to undersecretary for health Pierpaolo Sileri.

Italy will reach that threshold in mid-June, he estimated this week.

READ ALSO: What will Italy’s coronavirus rules be for summer 2021?

Large trade fairs open to the public can go ahead in yellow zones from July, the health minister stated – good news for those planning to attend postponed events like the Vinitaly wine fair.

For more information on Covid-19 restrictions currently in place in Italy, please see the Italian Health Ministry’s website (in English).