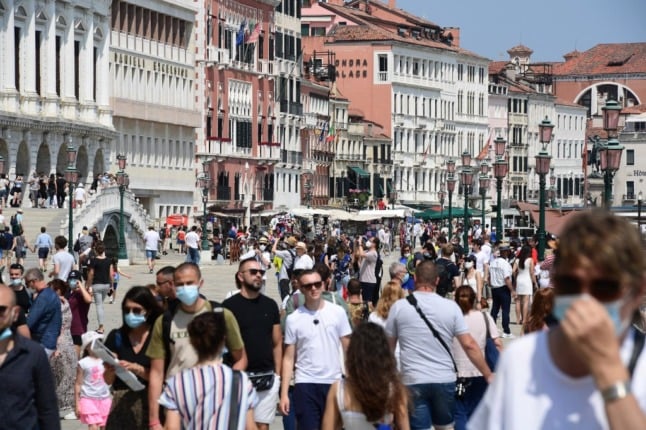 Tourists in Venice. Is Italy headed for another wave of infections at the start of the summer season? Photo by MIGUEL MEDINA / AFP

Concern over the Delta variant has already prompted the British government to hold off on easing restrictions as planned, and France has warned that it’s seeing the same number of cases now as the UK had a few weeks ago.

First detected in India and now present around the world, the variant is believed to be more transmissible than other strains of coronavirus as well as more resistant to current vaccines.

With more than 100 cases reported in Italy to date, what are the chances that the Delta variant could cause infections to spike just as summer travel resumes?

Where has the Delta variant been detected in Italy?

Cases linked to either the Delta or Kappa variants, two similar strains first detected in India, remain rare in Italy, according to the latest update from the national Higher Health Institute, or ISS.

“However, there has been a recent increase in the frequency and spread of such reports within the country,” the ISS says.

According to its most recent data available, 91 cases of both variants were confirmed in Italy between late December and early June, with Delta the more prevalent of the two.

Together the two variants make up around 1 percent of all new coronavirus infections in Italy, the ISS estimates, which in recent weeks have been averaging around 1,000 to 1,500 a day.

But health experts say the Delta variant is likely more widespread in Italy than we know.

The prevalence of the Delta strain “is probably underestimated,” Massimo Galli, head of Infectious Diseases at the Luigi Sacco Hospital in Milan, told Italian TV channel RaiTre. “We need more investment in tracing and sequencing, which is currently done partially, enough to tell us some things but not as much as might be necessary.”

Genetic sequencing of positive swabs is currently carried out on a voluntary basis by each region, which means that Italy has less data available about the spread of variants than countries where sequencing is more widespread and systematic, such as the UK or Denmark.

“Clearly we need to get rid of the illusion that [the Delta variant] isn’t in Italy and won’t arrive here, because it’s obvious it’s already through the door,” said Galli.

He predicts that the strain will ultimately overtake the Alpha variant – first identified in the UK in late 2020, in Italy shortly afterwards and now responsible for nearly 90 percent of all new infections in Italy – as the dominant variant.

Italy’s first known Delta infection was reported in Florence in early March, and since then more cases continue to be confirmed. The strain has been linked to more than 80 infections in Lombardy alone, including an outbreak at a gym in the region’s biggest city, Milan, where at least 12 people recently tested positive.

Local authorities have also announced 50 confirmed infections in Veneto and some 20 suspected cases in the city of Brindisi in Puglia, as well as a handful of smaller clusters or individual cases in Lazio, Emilia-Romagna and Alto Adige (South Tyrol).

A dozen cases have also been detected on the island of Sardinia, including at least one member of a Disney film crew that is currently shooting a live-action version of The Little Mermaid. Thirteen of the group have tested positive so far, with the rest of their swabs still being analysed for signs of the new variant.

What has Italy done to curb the spread?

According to the ISS, around 25 percent of known cases of the Delta or Kappa variants were in people who contracted the virus abroad, more than any other variants currently being monitored in Italy.

After the earliest cases were linked to people travelling from India, Italy imposed strict restrictions on travel that were then extended to Bangladesh and Sri Lanka. The current ban makes it all but impossible for anyone except Italian citizens to enter from any of the three countries, while those who do are subject to mandatory testing and quarantine.

Even with these restrictions in place, the majority of Delta or Kappa infections identified in Italy occurred here.

If the Alpha variant is anything to go by, travel bans do not necessarily stop a new strain taking hold: Italy heavily restricted travel from the UK after the Alpha variant was identified, but the strain went on to become dominant in Italy regardless.

Now that the Delta variant accounts for more than 90 percent of new infections in the UK, Italy has not announced plans to reimpose restrictions for British travellers, who can currently enter with a recent negative coronavirus test.

READ ALSO: Airlines cancel flights between the UK and Italy amid ‘ongoing uncertainty’

“If infections start to rise again, [Italy] too should reinstate the quarantine for those arriving from England. But we’re not there yet,” Prime Minister Mario Draghi said this week.

France, Germany, Switzerland and Austria put quarantine rules and other travel restrictions back in place last month for travellers from the UK amid concerns over the Delta variant, though Spain and Greece have dropped limits ahead of the peak summer tourism season.

And unlike the UK, which has just delayed its latest phase of lockdown reopening for at least another four weeks, Italy continues to ease its other Covid restrictions as scheduled.

One action Italy should take to prevent infections rising again as they have in the UK is to step up testing and tracing, according to public health professor Walter Ricciardi, an advisor to the Italian Health Ministry.

He this week called for “more intense and rigorous” monitoring of new infections to help control the spread of the Delta variant.

How effective are vaccines against the Delta variant?

The chief difference between the arrival of the Alpha and Delta variants in Italy is that, unlike six months ago, a significant chunk of the population has been vaccinated.

“The Indian variant is a nasty piece of work, but we’re not that worried because we have vaccines,” Sergio Abrignani, an immunologist at the University of Milan and a member of the government’s scientific advisory panel, told RaiTre.

“What we know from the UK is that after two vaccine doses you’re 80 percent protected with Pfizer and 70 percent with AstraZeneca,” he said, including against the Delta variant.

In fact, the latest data from the UK suggests that vaccines are even more effective against the most serious consequences of the new strain: an analysis by Public Health England this week found that the Pfizer vaccine was 96 percent effective against hospitalisation from the Delta variant after two doses, while AstraZeneca’s offered 92 protection.

So why hasn’t the UK’s vaccination campaign, which has proceeded much faster than Italy’s, prevented the spread of Delta?

Research indicates that a single dose of either of the two main vaccines gives a much lower level of protection against the variant – around 33 percent in the case of Pfizer.

The fact that Pfizer is the most widely used vaccine in Italy could therefore prove an advantage – firstly because a complete cycle offers marginally more protection than AstraZeneca, but also because the interval between doses is shorter: six weeks as opposed to 12 for AstraZeneca. That means more of the people who are receiving their first shot now will reach their maximum protection against the variant sooner.

Parts of the UK, where AstraZeneca is the most commonly used vaccine, have announced plans to cut the recommended wait between doses from 12 to eight weeks for this reason. And France, where Delta now accounts for 2-4 percent of new coronavirus infections, will offer booster shots of Pfizer and Moderna as soon as three weeks after the first.

Italy has fully vaccinated a slightly larger share of its population than France, though significantly less than the UK.

Those most likely to remain vulnerable to the Delta variant even after two doses of a Covid-19 vaccine are “the most fragile, the elderly and immunosuppressed”, infectious diseases specialist Galli told La Repubblica newspaper. Such patients should be closely monitored, he recommended.

One person involved in the Delta outbreak in Milan had been vaccinated, according to University of Milan virologist Fabio Pregliasco.

“We need to pay more attention,” he told Adnkronos news site. The risk “is that in autumn there may be a rise in infections, a backlash from the virus”, he said, urging the public to remain cautious.

In the meantime, the Delta variant, “though rare in Italy, is subject to close monitoring”, the ISS says.