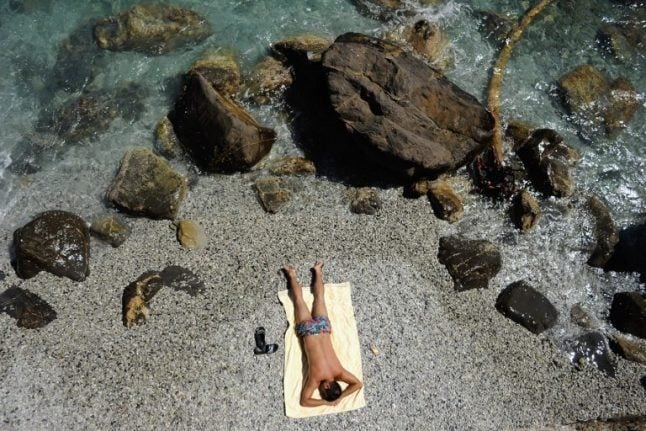 The place to be this week if you're in southern Italy. Photo: Oliver Moran/AFP

While the whole country is feeling the heat this week, the south is in for more sizzling temperatures throughout the weekend while things should cool down slightly sooner in the north.

The country has been “divided in two” as hot and cool air currents meet over southern Europe, weather forecasters say.

The hottest regions are Sicily, Calabria and Puglia, where the early summer heatwave is expected to reach its ‘peak’ on Thursday on Friday.

Authorities in Sicily have already reported highs of 44.5C in some inland areas on Wednesday.

High humidity and dusty skies have created stifling conditions across the southern regions as warm currents of air moved in this week from North Africa.

“The cold air mass over Western Europe meets very hot currents over the central Mediterranean, caused by the subtropical anticyclone, which also brings with it the desert dust which is enveloping our peninsula,” meteorologist Giulio Betti told Italian newspaper La Repubblica on Thursday.

Adding to the hot and sticky atmosphere is the so-called ‘Afa‘, or hot-humid air.

Temperatures are less extreme in the north of Italy this week, though thunderstorms are expected in some areas, particularly around the Alps, later on Thursday.

From Saturday, temperatures are expected to drop slightly in the north and centre of Italy, before also falling in the south from Sunday.

In many southern areas, temperatures are set to remain in the low-to-mid 30s in the early part of next week before climbing to 40C again.