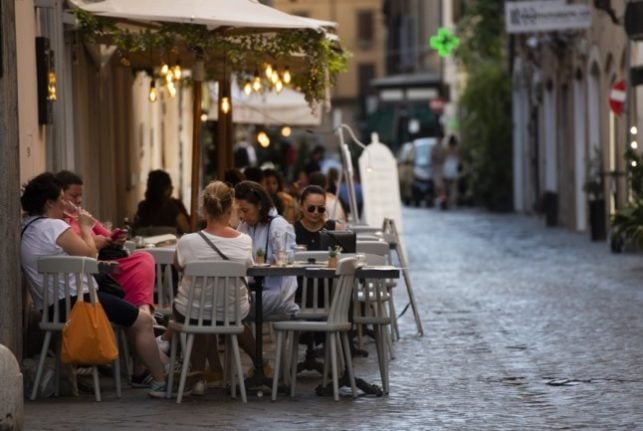 The Italian government is reportedly considering ways to extend the use of its certificazione verde or ‘green certificate’ health pass within the country this week after coronavirus emergency commissioner Francesco Figliuolo suggested on Monday that people may need an incentive to get vaccinated.

“Using the green pass for various types of events, as in France, could be the solution for a push,” Figliuolo told Italian TV news show Tg2 Post on Monday. “We must intercept the undecided.”

His statement came after French president Emmanuel Macron announced on Monday that the country will reinforce its health passport, making it a requirement at more venues including cinemas, theatres, bars, cafés and restaurants, in an attempt to keep rising infection rates under control and to sway those who are against vaccinations. What is Italy’s ‘green pass’ used for now?

At the moment, Italy’s certificazione verde is mainly used for quarantine-free travel within the EU.

The pass is currently only a requirement within Italy if you want to attend larger events such as wedding receptions and concerts, or to visit relatives in care homes. The government is also expected to make it a requirement for entry to nightclubs.

How is the French health pass different?

The pass sanitaire (health passport) is already in place for large venues in France – nightclubs, concerts, sports matches or any venue with more than 1,000 people.

However from August the French scheme will be expanded to include many everyday venues including cafés, restaurants, bars, shopping centres, hospitals or nursing homes as a visitor and long-distance travel on trains, planes or coaches.

Who do the Italian ‘green pass’ rules apply to?

At the moment Italy’s digital health certificate is only available to people who were vaccinated, tested or recovered in Italy.

People from EU and Schengen zone countries, as well as the US, Canada and Japan, can also enter Italy under ‘green pass’ terms but need to show equivalent health documents issued in their own country.

This applies when accessing events as well as when entering the country, and it appears likely that these rules would remain the same if the scheme were to be extended.

At the moment in Italy, only children under two years old are exempt from the health pass requirement.

However this could change if Italy expands the use of the document as France has.

In France, everyone over the age of 12 will need the pass when accessing venues events from August. The cut-off age is 12 because vaccination is only open to over-12s so far in France (which is the same as in Italy).

How likely is Italy to follow in France’s footsteps?

Whether or not Italy decides to start requiring the vaccine passport for more events or venues is likely to depend on how the vaccination campaign progresses, and on how sharp the recorded increase is in new coronavirus cases and hospitalisations in the coming days and weeks.

The Italian government is reportedly waiting to see the data contained in this week’s health monitoring report, due on Friday, before making any decisions.

Pierpaola Sileri, a junior health ministry official, suggested on Thursday that “a French-style green pass could make sense a few weeks from now”.

“The infection rate is rising and we must first evaluate the impact on our hospitals,” he told Italy’s Radio Cusano Campus, adding: “Let’s not call it the French green pass.”

Italy has not reported any drop in vaccination bookings due to vaccine hesitancy.

In Italy, the number of people who said they definitely or probably will not get vaccinated against Covid-19 is around 12 percent, according to a study of seven countries carried out in February 2021.

In France, the level of self-reported vaccine scepticism was more than double that (although more than two million people in France have rushed to book their jabs since Macron’s announcement).

Italy continues to administer around half a million doses of Covid-19 vaccines per day.

However, there are growing concerns about the number of people in older, more vulnerable age groups in Italy who are not yet vaccinated – particularly with the more infections Delta variant now circulating widely.

While Italy’s health experts are broadly in favour of expanding the use of the ‘green pass’ to stem a new rise in infections, some point out that the idea may not be workable.

“What we have to do is vaccinate as many people as possible and continue with the green pass which limits the movement of infected subjects,” he said, suggesting that this could prevent the need for the reintroduction of health measures in areas where the contagion rate is rising.

But Nino Cartabellotta, president of the Gimbe foundation for evidence-based medicine, said: “although desirable, the use of the green pass, following the French model, for access to bars, restaurants and other activities, is not very practical in the short term due to various obstacles that need to be removed.”

“First of all, the unavailability of vaccines for all those who would like them and the lack of free testing in all regions generates a risk of discrimination; secondly, tools and resources are needed for systematic checks; finally, there is a lack of a law on vaccination obligation for those who work in contact with the public.”

The Italian government has already made jabs mandatory for health workers amid concerns about low uptake in that group, and is now considering doing the same for school staff.

Though Italy’s green pass has been available since June 17th, many people who have been vaccinated in Italy have reported problems accessing it due to what appear to be technical issues, or because of difficulties with the bureaucracy involved.