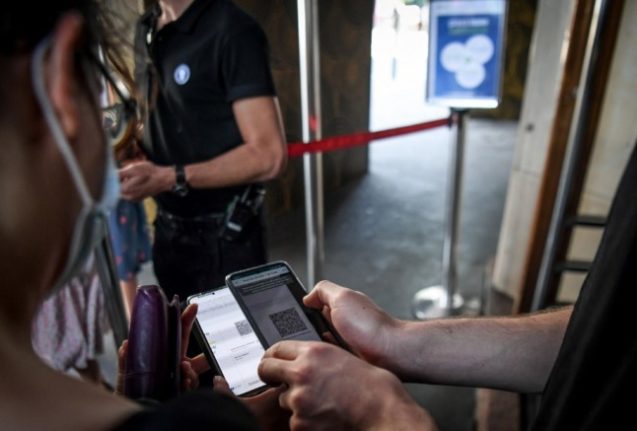 The EU health pass is currently used for quarantine-free travel but several countries are now expanding its use. Photo: Alain Jocard/AFP

Italy is planning to require people to show proof of full vaccination, testing or recovery in order to enter more venues as early as next week under an expansion of the use of its certificazione verde or ‘green certificate’.

An announcement had been expected earlier this week, but discussions are still ongoing on Thursday amid resistence from regional authorities to some aspects of the government’s plan.

Italian Prime Minister Mario Draghi is now set to meet with government ministers  at 5pm on Thursday to make final decisions on the plan, with a televised announcement expected after that.

The government has been looking at implementing a ‘French-style’ expansion of the green pass scheme, which could mean making the vaccine passport compulsory in order to access domestic flights, long-distance trains, nightclubs, gyms, and indoor seating in restaurants.

But regional presidents have now reportedly asked the government to make the pass necessary only “to safely allow the resumption of activities which were previously limited or not permitted”, including sporting events, concerts, nightclubs, fairs and conferences. So not at everyday venues like restaurants, cinemas, theaters, gyms, or swimming pools.

But many senior politicians, including the health minister, are pushing for more extensive use of the pass, which they say would enable them to keep all regions in the low-restricion ‘white’ zone, reports news agency Ansa.

Ansa cited a government source as saying the goal is “to have a solid system that allows for safe coexistence with the virus,” saying a limited use of the green pass would not work if the goverment were to also relax the criteria for regions to be declared risk zones, as planned.

Another sticking point is whether or not to make the green pass available in the case of vaccination only for those who are fully immunised – instead of 15 days after the first dose as is currently the case. This change, which the health ministry first suggested a month ago, would bring Italian rules in line with those in most other European countries.

While nothing has yet been officially announced, Italian media reports suggest the timing of the new decree means changes could come into effect as soon as next Monday, July 26th, or in early August. Italy’s green pass has been in use since June 17th, but at present it is only needed for international travel within Europe, and in Italy it can be used to access care homes or large events like concerts, sports matches and wedding receptions.

As Italy enters a fourth wave of coronavirus infections, fuelled by the more contagious Delta variant, several regions are nearing the threshold at which some health measures would need to be brought back under the country’s four-tiered system of restrictions.

The number of new coronavirus infections recorded in Italy has doubled over the past week, with the national average now at 29 new cases per 100,000 inhabitants.

With significant variations in the numbers between regions, the areas seeing the sharpest rises in cases currently are Sardinia, Sicily, Veneto. Campania and Lazio, according to the most recent weekly health data report published by the Higher Health Institute (ISS) and Italian health ministry.

For now, every part of Italy is currently classed as a low-risk ‘white’ zone.

If regions turn ‘yellow’, renewed restrictions would include restrictions on indoor dining at restaurants and a return of the requirement to wear masks outdoors in all public places.

With concerns about the impact this might have on businesses, the health ministry is now planning to change the ‘yellow zone’ criteria. The EU Digital Covid Health Certificate is currently being used for quarantine-travel across the EU, but several countries are planning to expand its use. Photo: Denis LOVROVIC/AFP

Meanwhile there are questions about how the scheme could be enforced in practice, as commentators argue that only police, and not business owners, would have the right to check health passes.

Who can use Italy’s ‘green pass’?