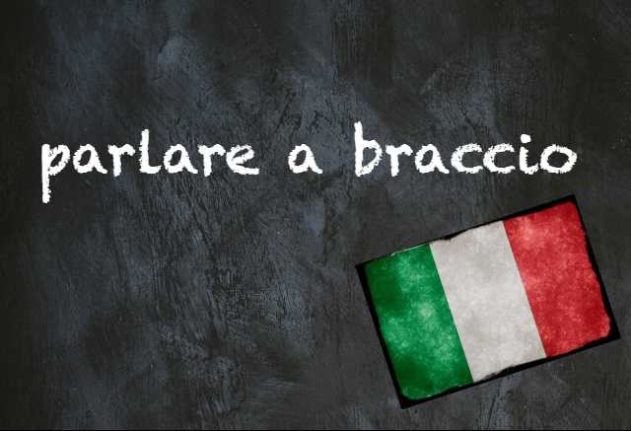 If you have any kind of job that involves giving presentations or talking to groups from time to time, you’re likely to have found yourself at some point needing to parlare a braccio.

In this situation the preposition ‘a‘ doesn’t mean ‘to’ or ‘at’ but more ‘in the manner of’ or ‘by’ the arm.

But wait a minute before you start knowingly waving your fist about in imitation of the pinched fingers emoji – it doesn’t literally mean to speak with your arms (though a little gesticulation definitely can’t hurt if you want to get your point across). It’s figurative, meaning to extemporise or improvise, to say something “off the top of your head”:

Non ho preparato nulla per il dibattito, dovrò parlare a braccio.
I haven’t prepared anything for the debate, I’m going to have to ad-lib.

Anglophones reading these examples might be reminded of another similar sounding English equivalent: to talk off the cuff.

That expression refers to actors or politicians who hadn’t memorised their lines or speeches reading from notes hastily scrawled on their sleeves.

It’s possible the practice started in the mid to late 1800s, when it briefly became popular to buy disposable paper shirt cuffs and collars to avoid soiling your clothes, turning your sleeve into a convenient notepad.

Historians have noted that the very earliest written record of the phrase is from the late 1920s, though, many years after people had moved on from the disposable cuffs fad, which does raise the question of whether the idiom was in use for several decades for before someone wrote it down, wasn’t coined till long after the practice that originated it died out, or people were just scribbling on their actual clothing by that point.

I see, you might be thinking: so the Italian and English expressions have the same origin, with slightly different phrasings (see gettare la spugna).

Arms were used as a form of measurement for clothes and fabrics for many centuries in parts of Italy, until the metric system came into use – so you would misurare a braccio, or measure by the arm.

As an arm is not a standardised unit of measurement, undertaking an action a braccio came to mean doing something approximately, without precision. Parlare a braccio, therefore: to speak off the top of your head, making things up as you go along.

In this way English and Italian seem to have arrived at two very similar expressions with entirely different origins that mean the same thing. One of the universe’s many odd coincidences.

A braccio isn’t just used with parlare – it can also be combined with the verb andare to make the phrase andare a braccio (to play things by ear, or improvise your plans).

A lei piace sempre andare a braccio.
She always likes to play it by ear.

Non ho un piano, sto andando a braccio.
I don’t have a plan, I’m making it up as I go along.

Sometimes, you just have to wing it.