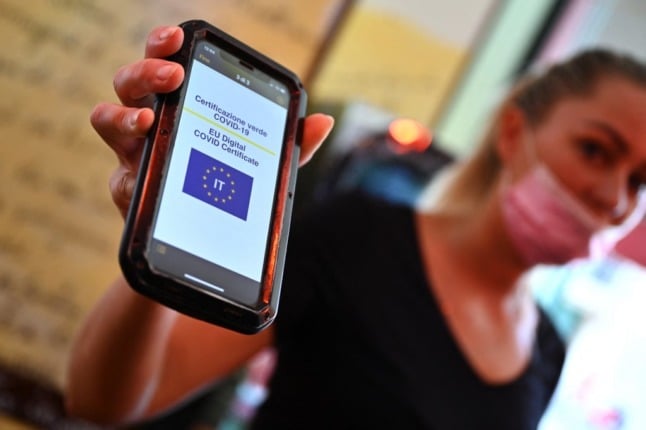 Italy’s ‘green pass’ has been made mandatory for cleaning companies and canteen staff working in schools and universities, as well as external workers in the healthcare sector.

The decision was made “to deal with the Covid-19 emergency in schools, higher education and social and health care facilities,” Prime Minister Mario Draghi is reported to have said during the cabinet meeting on Thursday.

The new decree contains the requirement for employees in these sectors to show proof of vaccination, testing or recovery at workplaces under the certificazione verde or ‘green pass’ scheme.

“It is a first step,” stated officials, as cabinet ministers met to discuss making the Covid passport mandatory for more workplaces, which is expected to be gradually rolled out until October.

The next steps will be to extend the ‘green pass’ to places where it is already required by customers, including restaurant and bar staff, managers of cinemas and theatres, and sports instructors working in places such as swimming pools and gyms.

State employees and then, finally, private sector companies are next in line.

Drivers of local public transport will also be required to show their QR code as proof of meeting the ‘green pass’ requirements – as will those working on high-speed trains, ships, ferries and planes.

Employees in contact with the public, such as those behind the counter at train stations, may also have to follow the same protocol. The final stage of the workplace health pass requirement is scheduled to encompass private sector workers, such as those in large factories and also small and medium-sized businesses.

The slower approach to expanding the green pass isn’t unanimously backed, however.

Secretary of the Democratic Party, Enrico Letta told reporters that the “the majority of Italians” would prefer immediate and widespread coverage.

But Giuseppe Conte, the former prime minister who is now leader of the Five Star Movement, called for calm in the meeting, saying he hoped “that no further tensions will arise on other issues”.

“At the moment, the completion of the vaccination campaign is our priority objective,” he added.

Italian employers’ confederation Confindustria has previously said it is in favour of making the green pass obligatory for private sector workers, but that the government must make Covid-testing free for employees.

Currently, the authorities have made no pledges to offer free swabs to private sector employees, partly amid concerns that this would be a disincentive to get vaccinated.

In response to a question on whether the State will bear the cost of these tests in future, the Minister of Labour Andrea Orlando, replied, “We will first decide what we want to do about the ‘green pass’ – then how to manage it, I think, is a matter for later.” Self-employed workers are not currently among the categories being considered for the ‘green pass’ extension, unless they need to access public administration, such as a lawyer entering court, for example.

Those with medical reasons for being exempt from getting vaccinated would need to undergo regular testing to enter their place of work – although the government hasn’t yet announced that swabs for this category will be free of charge as they are for school staff.

The digital pass has been required since August 6th in order to enter many cultural and leisure venues across Italy, including museums, theatres, gyms, and indoor seating in restaurants.

From September 1st the digital pass became a requirement for teachers and other school staff, while healthcare workers in Italy were already legally required to be fully vaccinated before the pass was introduced.

While the government is also considering whether to make Covid vaccinations obligatory for the entire population, it has pinned hopes on the scheme helping Italy reach the target of vaccinating 80 percent of the population over the age of 12 by the end of September.

The current figure as of Thursday stands at just under 73 percent, according to the latest government data.