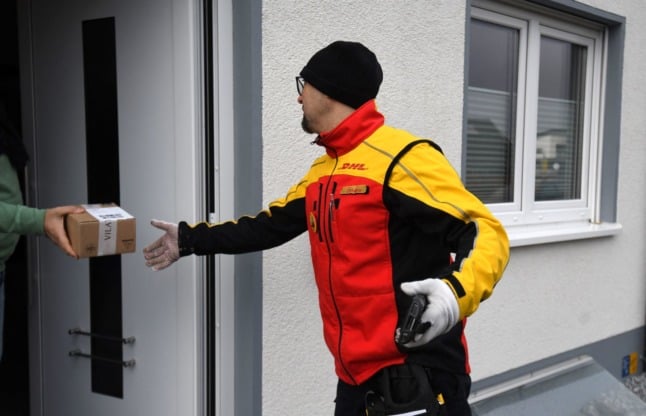 In early September, Helen Wood received a delivery at her office in a town outside Rome. It was a small present from her daughter – not an unusual occurrence.

But this time, the postal worker produced a slip demanding a payment of €3.26.

The package, which contained a tea towel and an artisanal wooden postcard from the Isle of Mull, was marked as having a value of just £5. Helen challenged the charges, but eventually paid up when the worker insisted they would have to return the gift to the post office depot if she didn’t.

“It’s absolutely ridiculous,” says Helen. “It feels like an abuse of the system.”

Helen, who has lived in Italy for 40 years, is one of a large number of EU residents who in the last couple of months have had surprise charges sprung on them for deliveries and gifts sent from outside the EU.

Emma Trend, an English language teacher who’s been living in Reggio Emilia for the past year having moved with her family from Spain, says she’s stopped ordering packages from the UK, and has warned her extended family and friends to stop sending them presents.

“It’s very bizarre how it’s all come about – it was almost like it was introduced without warning, and wasn’t thought through properly,” she says.

The changes have caused widespread confusion, leaving frustrated EU residents wondering where the charges have come from and why they were brought in in the middle of the calendar year.

Ok, just WHAT is going on with receiving parcels in Italy from abroad? The past three I've had to pay customs fees when the postie has delivered them. This is on top of the delivery fees I paid when I ordered. This latest fee was €35.39! It's making ordering anything unfeasible. pic.twitter.com/AnlroYE3F3

What exactly is going on?

The EU says the change was made to combat fraud via the widespread under-reporting of the value of goods to dodge the tax, and to make things fairer for companies trading within the EU.

It was supposed to come into effect from the start of January, but was pushed back to July because of pandemic-related delays.

The rule is just part of a raft of reforms designed to update the EU’s systems and bring them in line with 21st-century global trading practices, where international e-commerce accounts for a large chunk of the market.

What does this have to do with Brexit?

In one sense, the changes have everything to do with Brexit, since if the UK hadn’t left the EU customs union it wouldn’t be a non-EU, or ‘extra-EU’ country.

It’s important to bear in mind, however, that the abolition of the €22 ‘low value consignment’ threshold that kicked in from July is an EU-wide regulation that applies to imports from every extra-EU country, not just the UK.

Confusingly, after the UK left the EU customs union on December 31st, 2020, there was a brief six month window where EU residents were required to pay VAT on only those packages received from the UK that had value of over €22 – a threshold which was then reduced to zero on July 1st. Until now I haven’t had to pay import VAT on any packages from outside the EU, regardless of their value. How is this possible?

It might simply be the case that your package slipped through the net – you technically should have been asked to pay the import VAT, but the customs authorities let it slide because they didn’t have the capacity to check every item.

Philip Munn, a VAT partner at the international tax and auditing firm RSM, also points out there is also a longstanding exemption for ‘personal imports’ (i.e., items you already owned) which remains in place with the new rules – so you shouldn’t be charged VAT, for example, to bring your existing furniture over to Italy from the UK when moving house.

I’ve noticed I’m also suddenly being charged import VAT for packages sent within the EU. What’s that about?

Sarah Shears, who heads up the VAT Group at the UK office of the global tax firm Andersen, says the changes that came in on July 1st also abolished what was known as the ‘distance selling threshold’ within the EU.

Previously, if EU suppliers selling to EU consumers imported goods with a total value of less than €35,000 per year into most EU countries (the threshold was €100,000 for Germany, Luxemburg and the Netherlands), they weren’t required to register for VAT in the buyer’s country, and could instead pay the VAT in the seller’s country.

This meant that a savvy customer in, say, Sweden could buy products from a supplier in an EU country with a much lower VAT rate (e.g., Luxemburg), to shave off costs.

The replacement rules hold that EU suppliers who sell goods with a collective value of more than €10,000 per year across all countries throughout the EU must now pay VAT to the country where the buyer is based using the EU’s new VAT ‘One Stop Shop’.

But because the transaction is occurring within the EU, you can pay the import VAT up front at the point of sale and your goods won’t be held at customs (because, after all, you’re trading within the customs union) – so it’s possible you may not even have noticed the change. How is the VAT charge calculated? Does it vary depending on where the package is sent from?

Each country has its own VAT rates for different items – for example, smartphones in Italy are charged at a standard VAT rate of 22%.

When an item’s subject to import VAT, you’re adding up the value of the item, plus things like transaction costs (how much you paid for shipping), insurance, and import duty, and then calculating the VAT based on the total sum – so you’ll be paying higher Italian VAT on a frying pan imported to Italy from the UK than the exact same brand of frying pan bought in Italy.

Some readers have commented that it seems like they’re paying more VAT on packages from some non-EU countries than from others. This shouldn’t be the case, say Munn and Shears.

“Anywhere outside the EU, one would expect them to be the same,” says Munn – although he points out that under the terms of the Trade and Cooperation Agreement between the EU and the UK, products manufactured and sent from the UK are exempt from EU customs duties.

Munn also notes that many sellers pass the responsibility of collecting the VAT on to the freight forwarding agent (i.e., courier or postal service) carrying out the delivery, in which case that company will charge an additional, separate, handling fee.

Italian residents will typically see this identified as diritti postali. Poste Italiane’s charge is between €2 and €15 per package, depending on its value – which means you could find yourself (as I did) in the strange situation of paying a  €2 handling charge and  €0.51 VAT to be allowed to collect a £1.31 magazine. What about presents? Do I really have to pay VAT on those?

Helen is now worried about what will happen this Christmas, when she would normally exchange gifts with family outside the EU.

“With people sending bulky cards with pop ups inside that maybe cost £2 to post from the UK, am I going to be charged  €3.26 to receive it?” she asks.

Emma says she’s told her family to avoid even sending her letters, in case she’s charged for those.

The website of the Italian postal service, Poste Italiane, says “if the item is not of a commercial nature (as the object is sent between private individuals on an occasional basis and without remuneration) and its intrinsic value is less than 45 euros, no charge is required.”.

However, in Italy at least, that exemption does not seem to have been applied. Many of The Local’s readers have – like Helen – reported being charged Italian VAT and postal handling fees for gifts valued at as little as €5.

As of September 15th, The Local had not received a response from Poste Italiane to a request for clarification on why in practice Italian residents are being charged to receive low-value gift packages.

Regardless, letters and cards should definitely not be subject to any VAT charge, say Shears and Munn. So what can buyers in the EU do?

To go along with its new reforms, the EU introduced the ‘Import One Stop Shop’, or IOSS. Previously, non-EU sellers would have to register separately for VAT in each EU country they sold in. With the IOSS, they can now register for VAT just once, in whichever EU country they choose, in order to declare and pay VAT anywhere in the bloc.

The significance of this from a customer’s perspective, says Munn, is that with IOSS-subscribed suppliers the buyer can pay the import VAT at the point of purchase, avoiding the hassle of collecting the package from the courier or post office and paying an additional handling fee.

If you want to continue ordering products from a certain non-EU company, then, the first step is to ask them if they are signed up to the IOSS; and if they’re not, to ask them to do so.

Bear in mind that the IOSS can only be used for goods with a value of less than  €150 – for items with a greater value, VAT will still need to be paid on delivery.

In those cases, says Munn, many sellers have calculators on their websites that give you an indication of what your total costs are going to be. “Essentially they’ll say you need to pay £1000 now, but don’t forget you’ve got €400-500 of duty and VAT and other things to pay before the goods arrive on your doorstep” he says.

For gift packages, The Local is continuing to look into the current rules in the EU and in Italy, and will provide updates as we receive more information.