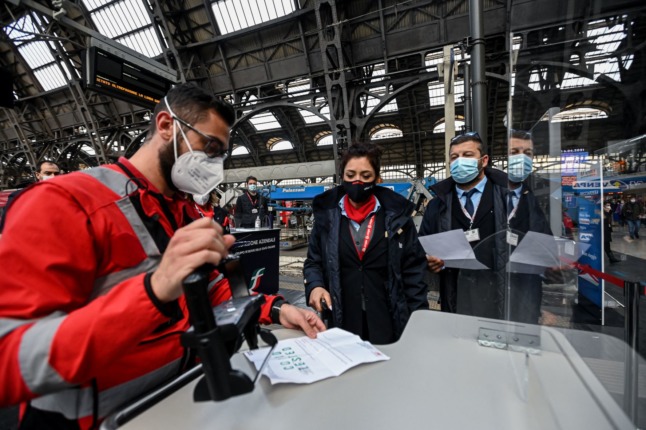 The law requires all public, private, and self-employed workers across the country to produce a health certificate showing that they are vaccinated, recovered or have proof of a recent negative coronavirus test in order to enter any workplace.

The requirement has already been in place for school and university employees and care home workers since September, and a vaccine mandate has been in place since April for anyone working in public or private social health positions, including in pharmacies and doctors’ offices.

The government hopes the measures will boost vaccination coverage and keep infection rates down.

“We’re extending the ‘green pass’ obligation to the entire world of work, both public and private,” Health Minister Roberto Speranza told a press conference after the government took the decision in September.

“And we’re doing it for two basic reasons: to make these places safer and make our vaccination campaign stronger,” Speranza said.

The new October 12th decree outlines how the law must be applied by employers in specific situations. The official text can be found here.

Here’s how the new rules will be implemented in practice.

How will workplaces check?

Employers must have operating procedures in place to ensure they are in compliance with the rules, with the obligation to perform random checks while prioritising mass checks at key entry times. Each workplace must officially designate at least one person who is responsible for enforcing the rules.

Public sector employers are not required to conduct checks at key entry times, but must carry out daily checks on at least 20 percent of the staff on duty, rotating to ensure that all staff members are checked over a certain time period.

Every green pass comes with a QR code, which can be scanned via the VerificationC19 app. This is the main tool workplace managers have to quickly conduct checks.

Without providing much in the way of detail, the government’s latest FAQs on the subject suggest that employers can streamline the process by integrating green pass checks with their existing procedures for checking staff attendance and temperatures.

Public employers that subscribe to the Ministry of Finance’s NoiPA platform for managing the salaries and tax contributions of public sector employees can sync up their NoiPA data with the government’s national Digital Green Certificate platform, the government’s guidelines say.

Are there any exemptions?

Employees who are unable to receive a coronavirus vaccine due to a certified medical condition are exempt from the requirement to produce a green pass to go to work.

The government’s FAQs say that those workers who are unable to get vaccinated for health reasons will be issued with their own QR code that they can scan in lieu of a green pass. In the meantime, workers who have supplied their employer with documentation proving they are medically exempt should not be subjected to any checks.

Those individuals who are entitled to but have not yet received their green pass can use official certification provided by the relevant health facility until the certificate comes through.

Private sector lawyers (not those employed by the state) conducting a trial “and other defenders, consultants, experts and other magistrates’ assistants who do not work for the justice system” as well as “witnesses and parties to the trial” do not require the green pass to enter court and other judicial offices, according to the text of September 21st decree – though they will need it in other work contexts, such as to enter a law firm.

Otherwise, the pass is required for “anyone who carries out a work activity” in the private sector, all employees of the state, and anyone on an external contract who works in public administration.

The requirement is extended to the Presidency of the Republic, the Chamber, the Senate, and the Constitutional Court, but as such a decree can not automatically be applied to constitutional bodies, it will be up to the institutions themselves to decide how to implement it, reports Rai.

A school janitor who attempted to bypass the rules in early September by downloading a self-certification form from the internet claiming the requirement violated her constitutional freedoms was sent home by the school principal, according to the news daily La Stampa.

What are the penalties for failing to produce the certificate?

The decree states that those who fail to produce a green pass can not be fired, but they could be fined or suspended without pay.

All employees across the public and private sectors who fail to produce a pass face penalties of between €600 and €1,500, and salaries will be frozen from the first day that they are without the certificate. Employers are subject to fines of between €400 and €1,000 for failing to uphold the rules.

Public sector workers without the pass will be marked down for unauthorised absence from day one and will be officially suspended without pay after five consecutive days of failing to produce the pass, while private sector workers will simply be listed as absent without pay until they display the certificate. Does the law also apply to the self-employed?

Any self-employed person who enters a workplace must have their green pass checked and faces the same fines as all other workers for failing to produce a pass, say the rules – although obviously there’s no employer to freeze their pay or suspend their contract.

In the absence of other information, it can be assumed that co-working spaces made up of self-employed workers will be subject to the same requirements as all other work places, with the spaces’ managers responsible for conducting checks.

How will this work for the unvaccinated?

Unvaccinated workers without medical exemptions will need to take regular tests at their own expense unless their workplace decides to provide them for free.

However, a rapid antigen test price cap of €15 euros for adults and €8 for minors has been introduced in certain pharmacies participating in a government scheme to make the tests more affordable for workers, while those medically unable to get vaccinated (who in any case are not required to produce a green pass) can be tested for free.

How long will the requirement be in place?

All green pass obligations are in theory due to expire on December 31st, 2021, along with Italy’s ongoing state of emergency.

In practice, the state of emergency may well be extended, as has repeatedly happened in the past to address the ongoing pandemic, in which case the green pass requirements are also likely to be extended.