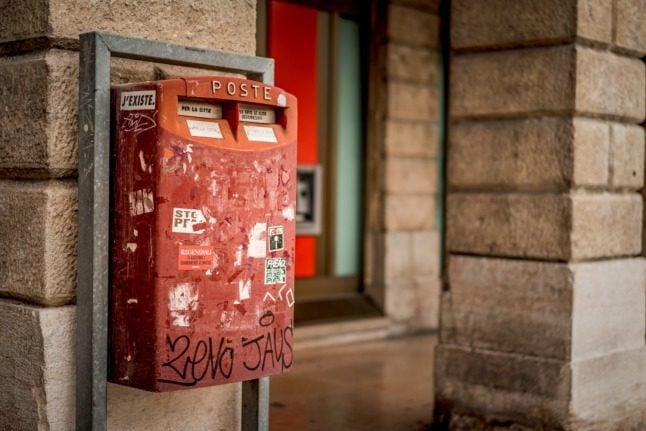 Photo by Tommaso Pecchioli on Unsplash

The doorbell rings and I skid on the floor tiles as I run to buzz in the courier, a childlike bounce in my half-jog-half-walk in anticipation of the package I’ve been told to look out for.

Receiving a little thought from loved ones back home is a highlight when you live in another country. It keeps you connected to each other and sometimes, a parcel just might contain something you’ve been craving and missing in Italy.

Crumpets, Yorkshire Tea and Marmite immediately spring to mind. Does that give away that I’m from the north of England?

I hop to the front gate, a smile on my face, arms outstretched to receive the bundle that will make me feel closer to the people I hardly see and realise the postman isn’t letting go of the package.

Without much more explanation than that, I asked why I was being charged to receive a gift and was told they’re just fees you have to pay. If you don’t want to pay, the parcel will be returned.

As I’d been waiting for this package weeks after it was due to arrive, I shrugged, smile vanished replaced by a furrowed brow, and trundled off to get my purse, muttering all the way.

On handing over €30, he said he didn’t have any change.

Of course he didn’t.

This became a habit I unfortunately got used to over the following weeks. Gifts turned up, I had to pay anywhere between €3 and €30 and the person delivering it never had change. So naturally you have to round up and lose even more money.

Or I’d get home and receive a notice of missed delivery in the postbox. So then I’d have to take time out of my day to go to the post office (which in Italy is eventful itself and can take hours if they’re really on form), queue up and cough up the fees to collect the gift.

Not only are there fees, delivery can take weeks or months (if at all)

I’ve been particularly stung by these extra fees lately, as I got married in August and most people from England couldn’t make it due to travel restrictions. So they sent across a little present instead.

Then it was immediately my birthday, so there were more gifts I ended up paying almost the same value of the present to receive.

I’ve now spent around €150 in postal fees on delivery since July.

All in all, the cost to deliver a parcel for my family and friends and the charges I end up paying when it gets here matches or outweighs the value of the item.

We’re usually talking about something little, some tea and chocolates perhaps, but although low in monetary value, these items are priceless when you know someone has taken the time to think of you and send you a gesture.

But it’s now got to the point where I’ve asked people back home not to send anything, which is sad, let’s face it – especially as Christmas is coming and the exchanging of gifts is going to effectively come to an end.

Others have got in touch to say it’s happening to them too. Jess in Tuscany reported that she paid €35 for receiving an item marked as ‘gift’.

I finally received the two packages I ordered from the UK in June. The one that I brought new from a shop – with a value of £130 went through customs and arrived without me spending a cent. The second hand horse gear that had been marked as a gift cost me €35. Not cool.

Only on Monday, I groaned as I received another notice of an attempted delivery of a parcel from England – with the fees due as usual. What was once a joy now has me belligerently swearing every time I tentatively open the mailbox.

I used to love the courier. They were the bearer of surprise and delight. Now I pull back the curtain and grab my purse in exasperation every time I see them clutching my goodies.

This particular parcel was sent over 9 weeks ago and was sent tracked with 3-5 days delivery.

Not only are residents in Italy getting charged for gifts, readers have reported that the delivery time is excessively delayed, which I have repeatedly experienced too.

In some cases, the parcel never reaches its destination with no clear explanation as to why.

For Jessica in Rome, she said her mum had sent her a present she had personally made by hand. It had “sentimental value”, which is something you can’t claim compensation for – and had it arrived, she’d have had to pay €5 to receive it.

The Poste threw my last gift from the UK in the bin so 🤷🏼‍♀️ But had they held on to it I would have been charged €5 for customs and “handling fees”!

I received news of another example of the procedure, where a resident in Italy paid €10 to receive a T-shirt from the UK.

Last week, I received a small package containing a T-shirt (stated value £20) from UK; I had to pay Poste Italiane post woman €10 extra to receive it.

Although not everyone has been hit by these charges, making the situation even murkier.

Mira in Rome managed to evade paying postal fees on her low-value parcels, even if based on others’ experience this seems to be down to chance.

I've received a couple of parcels and haven't been charged, I've just asked that the sender specify gift and also put a value of under £20 (I think that value makes a difference?)

Since these charges have only just started being applied halfway through the year on everything I receive from outside the EU, I wondered whether the fees on gifts in particular were a mistake.

Why are gifts getting taxed?

New EU regulations mean people now have to pay VAT charges on all parcels from outside the bloc, a measure that came into force on July 1st, six months later than scheduled due to the pandemic.

Nevertheless, despite the rule slipping in halfway through the year and it being applicable to all purchased items of any value, there is still an exemption for low-value gifts.

In that case, will these levies be recognised as an error and be dropped?

Looking at my receipts, there’s a breakdown of diritti postali (handling charge) and the VAT – which shouldn’t be applied. The handling fees of the post service or courier are always much higher. In the example of my first package, out of €22.57 of charges, €22.20 were for UPS’s handling fees.

In another, smaller item, I was charged €2.00 handling fee by Poste Italiane and €0.26 for the customs fee.

The website of the Italian postal service, Poste Italiane, stated, “If the item is not of a commercial nature (as the object is sent between private individuals on an occasional basis and without remuneration) and its intrinsic value is less than 45 euros, no charge is required.”

However, as we have experienced, that’s not been communicated yet as many residents in Italy continue to report paying fees on gifts of this nature.

As of September 21st, The Local had not received a response from Poste Italiane to a request for clarification on why in practice Italian residents are being charged to receive low-value gift packages.

And it’s still happening on every single gift item I receive, whether that’s delivered by the Italian postal system or a private courier.

For now, it seems gifts are being bundled together with all items and no distinction is being made between goods purchased online and a hand-knitted scarf sent from your granny.

The EU taxation and customs website noted, “Customers in the EU will only receive the goods bought after the VAT has been paid.”

Online sellers need to register with the EU’s VAT ‘One Stop Shop’ to clear customs “in order to avoid VAT being levied upon importation and to therefore speed up the release for free circulation of the goods”.

So this explains why so many parcels are getting stuck and taking weeks and months to be delivered, but it only applies to sellers who may not have registered with the EU’s import system – and it doesn’t account for low-value gifts that shouldn’t be swept along with these changes.

Residents in Italy are in a frustrating phase of knowing these charges shouldn’t apply but having to pay them anyway.

For now, there is at least one item that can be sent without getting taxed at the door: the written word.

The Local spoke to VAT and tax experts Sarah Shears and Philip Munn, who both confirmed that there should be no charges on letters or cards.

So at least we’ll still be able to keep loved ones on our Christmas card list, even if there won’t be any tax-free figgy pudding.

The Local is continuing to look into the current rules in the EU and in Italy, and will provide updates as we receive more information.