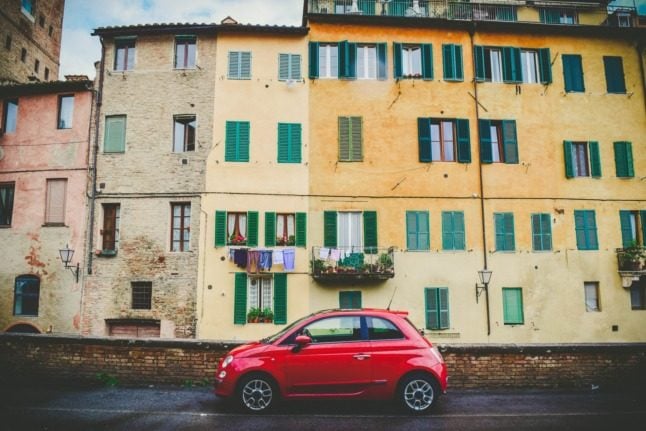 “If I can do it, anyone can,” Liz Walker, who lives in the southern region of Puglia, said when describing her experience of sitting and passing her Italian driving test.

At 68 years old and with a self-assessment of “limited” Italian language skills, Liz claimed she is proof that getting your Italian driving licence isn’t impossible – even if the process sounds intimidating to non-Italians.

Italy is currently one of the only EU countries not to have reached an agreement that will allow Brits living in Italy to swap their driving licences without resitting a test, but the UK government says that talks are still ongoing.

Once Britain left the EU, British residents joined a list of other countries that require drivers to retake their test in Italy in order to get an Italian licence (patente B) and be legally allowed to drive on Italy’s roads.

Brits are still benefitting from a 12-month grace period in which they can continue to use their British licence in Italy.

Since there are now less than four months to go, some drivers may consider starting to practise for their test so that they can still drive from January 1st – in case a deal isn’t made.

Liz decided not to gamble on the two countries reaching an accord by the end of December and her decision became easier when the Italian authorities refused to recognise her British paper driving certificate.

Although she’s from England, she didn’t have the plastic card version of her licence as she had been living in South Africa for the previous 40 years. After moving to Italy in January 2020, she decided to start revising for her Italian driving test after repeatedly trying, and failing, to get the paper version of her licence recognised.

Italy does not exchange licences from most non-EU countries, including South Africa, so she couldn’t convert that licence either.

Many people The Local has spoken to about sitting the Italian driving test said it can be a lengthy, expensive and difficult process.

And for those who aren’t fluent in Italian, the country does not give the option to sit the test in English – making it even more challenging.

The theory test is often the part non-Italians who need to sit the Italian driving test find most daunting – with some readers telling us they’re still putting it off because they don’t feel confident enough with either the language or the large amount of detailed theoretical knowledge needed.

READ ALSO: Getting your Italian driving licence: The language you need to pass your test

But Liz told us to “be prepared to sit down and study” and if you have that mentality, you’ll pass it.

So how did she do it if her Italian language skills are basic?

Despite not being able to speak much Italian, Liz said that she could eventually read everything after memorising the questions and terminology.

“I practised the theory test for around three hours a day for two-and-a-half months. Eventually, it becomes instinctive and you recognise what the questions are,” Liz said.

She began her studies during lockdown, taking advantage of the extra time on her hands as she was, like everyone in Italy in March 2020, unable to go anywhere.

With the Italian Driver’s Manual in hand, Liz said she went through all 43 chapters and read every question, translating everything and jotting down words she didn’t know.

She practised online quizzes, took plenty of practice tests and eventually went to a local driving school (autoscuola) to book her theory test.

Only the driving instructor didn’t believe she could do it as she couldn’t speak Italian. He watched in disbelief as she kept sitting and passing practice tests with zero errors.

Liz said she paid a total of €200 for theory lessons at which she just turned up and kept passing practice tests.

Eventually, the instructor agreed to take her to the testing centre (with a €30 transport fee) for the official theory test, which she passed again with no errors.

“I was shaking like a leaf when I went to sit the theory exam, but once I read the questions slowly, I had no problems and finished everything within 14 minutes,” Liz confirmed.

You’re allowed a maximum of 30 minutes for 40 true or false questions and Liz said that it’s not difficult if you’re prepared to read what it says – and don’t assume.

She revealed that they ask the same question several times, just in different ways or inverted.

Her hard work paid off, as among the group of seven from her driving school, only she and two others passed – and they were all native Italian speakers.

On to the practical test

Liz was told she needed to take 12 driving lessons, which she was surprised by, given she’s been driving her whole life.

In fact, six hours of driving lessons with an approved instructor are compulsory, as stated on the Italian Ministry of Transport’s website.

Regardless, she did the 12 hours as requested by the driving instructor, which came to another €240.

She found the instructor to be “dangerous”, noting that he didn’t adhere to ‘stop’ signs, overtook on roads where it’s not allowed and kept speeding.

“He broke every rule in the book,” Liz told us.

Fortunately and despite the hazardous tuition, Liz had no problems passing the test, which cost another €50.

It took 10 minutes with a short drive and some basic manoeuvres, such as reversing and a three-point turn, and it was over.

So after a few months of hard study and around €500 later, Liz received her Italian driving licence straight after passing her practical test.

Apart from lots of revision (and in her case, the willingness to overlook dubious driving from the instructor), Liz advised the key is to “go in with confidence”.

If you’re planning to sit your Italian driving test, the following sites contain useful resources to supplement your lessons, along with the Italian Driver’s Manual:

For more information on driving in Italy, keep an eye on the UK government website’s Living in Italy section and also check the Italian government’s page on steps to obtain a Patente B.

See The Local’s Dealing with Brexit section for more guides and updates.