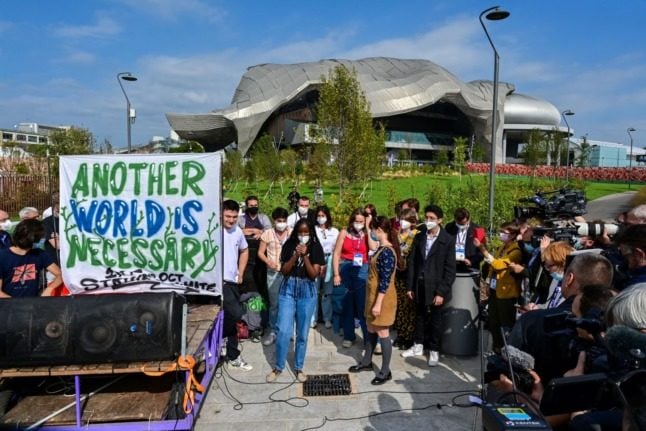 The youth delegates will outline their priorities for climate action in a joint statement to be presented to ministers meeting on Saturday as part of the preparations for the COP26 UN climate summit, which begins October 31st in Glasgow.

The Pre-COP 26 conference is being held at Milan’s MiCo convention center between Thursday September 30th and Saturday October 2nd.

The preparatory summit brings together climate and energy ministers from a selected group of countries to discuss and exchange views on some of the topics that will be addressed at COP26.

As the event opened on Thursday morning, some protestors formed human roadblocks blocking access to the MiCo in an effort to draw attention to their cause, reports news agency Ansa.

“Milan blocks those who devastate the planet” read one banner laid in front of a human blockade.

Clashes with police were reported as law enforcement attempted to forcibly remove the protesters from the roads, with Ansa publishing a video to its Twitter account showing officers in riot gear beating a crowd with batons.

Speaking at the event’s opening on Thursday, UN chief Antonio Guterres urged young people to keep up the pressure, saying “your solidarity and demands for action set a powerful example.”

“The window of opportunity to prevent the worst impacts of the climate crisis is closing quickly,” he told the crowd.

“We know what needs to be done and we have the tools to do it. Young people have been in the forefront of putting forward positive solutions, advocating for climate justice and holding leaders to account.”

Italy’s prime minister Mario Draghi held a private meeting with Thunberg and the youth activists Vanessa Nakate and Martina Comparelli on Thursday, which the premier said “went very well”, according to the national broadcaster Rai.

But speaking at the Youth4Climate event on Tuesday Thunberg warned political leaders against using empty rhetoric as a cover for their complacency, castigating them for “30 years of blah, blah, blah.”

“Our hopes and dreams drown in their empty words and promises.”

The COP26 summit  is being billed as crucial to the continued success of the 2015 Paris Agreement.

The landmark 2015 accord commits nations to limiting global temperature rises to “well below” 2 degrees Celsius above pre-industrial levels through sweeping emissions cuts.

Countries also promised to work towards a safer temperature cap of 1.5C.

But emissions have continued to rise in the six years since the deal, while the latest round of national carbon-cutting pledges puts Earth on track to warm a “catastrophic” 2.7C this century, according to a UN assessment this month.

Guterres urged delegates in Glasgow to bring their emissions plans in line with a 1.5C pathway.

“This means that they must commit to net-zero by mid-century, with ambitious 2030 targets, and clear plans to achieve them,” he said.

The UN chief also called on developed nations at COP26 to make good on their promise to deliver $100 billion each year to countries already bearing the brunt of climate disasters.

“We need national leaders to follow your example and ensure the ambition and results we need at COP26 and beyond.”

Britain’s Prime Minister Boris Johnson, whose country will host COP26, said via video link that “young people around the world are already paying the price for the reckless actions of their elders.”

“There is still just enough time to put on the brakes. We know what needs to be done, we just have to get on with it. Change on the scale we need is perfectly possible.”

Johnson summed up the summit aims as: “Coal, cars, cash and trees.”

“We want to move away from using coal as a way we generate electricity and move towards renewables,” he said.

“We want everybody to stop using internal combustion engine vehicles. We want to raise the funds that the whole world needs — the developing world in particular — to tackle climate change, and we need to plant hundreds of billions if not trillions of trees,” Johnson said.