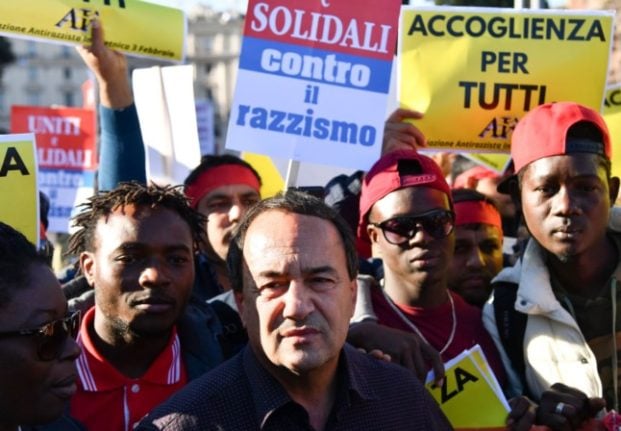 Domenico Lucano participates in a march against racism in Rome on November 10, 2018. Alberto PIZZOLI / AFP

Lucano became renowned in recent years for welcoming migrants to his village of Riace in the southern region of Calabria to counter a gradual decline in inhabitants and workers.

The so-called “Riace model” won international acclaim as one of Italy’s most successful integration projects.

Under the programme, Riace’s abandoned houses were restored, artisan shops were opened and the tourists flocked to see a place where foreigners made up over 20 percent of its 1,800 inhabitants.

Lucano was even named one of the 100 most influential personalities by Fortune magazine in 2016 and inspired a docu-fiction by Wim Wenders.

But in October 2018 Lucano was arrested and charged with promoting illegal immigration and other acts of administrative wrongdoing.

At that time Italy was under a coalition government led by the populist Five Star Movement and the anti-immigration League, with hardline League leader Matteo Salvini in the role of deputy prime minister and interior minister.

Salvini, who remains at the head of the League but is no longer in office, accused Lucano of seeking to “replace Italians with Africans”.

Salvini is himself now standing trial on ‘kidnapping’ charges for refusing to allow a migrant rescue ship to disembark on Italian soil, and faces up to 15 years in prison if convicted.

The case against Lucano is seen by many commentators as a politicised effort to make an example of those who try to assist migrants in Italy.

Sentence is in for #MimmoLucano, former mayor of Riace (Calabria) & a leader in migrant reception & solidarity practices in Italy: 13 yrs 2 mos, nearly twice what prosecutors requested.

It's a harsh statement against migrant solidarity. Background 🧵:https://t.co/tnupfgThOF

The 13-year sentence handed down to the former mayor is almost double that of the seven years and 11 months recommended by prosecutors, reports the news daily Corriere della Sera.

Lucano has also reportedly been ordered to repay €500,000 in funding received from the European Union and the Italian government for his projects.

“It’s an exorbitant conviction that totally goes against the evidence… (it is) totally incomprehensible and unjustified,” lawyers Giuliano Pisapia and Andrea Daqcua said.

“More than 13 years in prison for a man like Mimmo Lucano, who lives in poverty and has had no pecuniary or non-pecuniary advantages from his actions as mayor of Riace… (is) astonishing,” they were quoted as saying by Italian media.

Lucano, who will appeal, “has always been committed to his community and to the reception and integration of children, women and men fleeing war, torture and hunger,” they said.

The Court of Locri found him guilty of fraud, embezzlement and abuse of office, in addition to favouring illegal immigration.

The hashtag #mimmolucano was trending on Twitter on Thursday, with many public figures expressing shock and dismay at the ruling.

“It’s an unjust sentence. We are convinced of his innocence,” tweeted the senator and antimafia journalist Sandro Ruotolo.

Some pointed out that Luca Traini, a far-right extremist who shot at and injured six migrants in 2018, received a lesser sentence of 12 years.

Others have called for protests in solidarity with Lucano.

“I spent my life chasing my anti-mafia ideals. I imagined myself contributing to the redemption of my land. Today it all ends,” Lucano reportedly said in a statement to the press following the judgment.

“It is a very heavy thing.”

In Italy those convicted of a crime have the right to appeal all the way up to the Supreme Court.

Sentences only become definitive after this process is exhausted, which typically takes several years after an initial conviction.

“Reaffirming our trust in the judiciary and underlining the presumption of innocence until the final sentence, ANPI trusts entirely […] in a positive resolution of this very painful judicial matter” the head of the anti-fascist Italian association ANPI wrote in a Facebook post on Thursday.