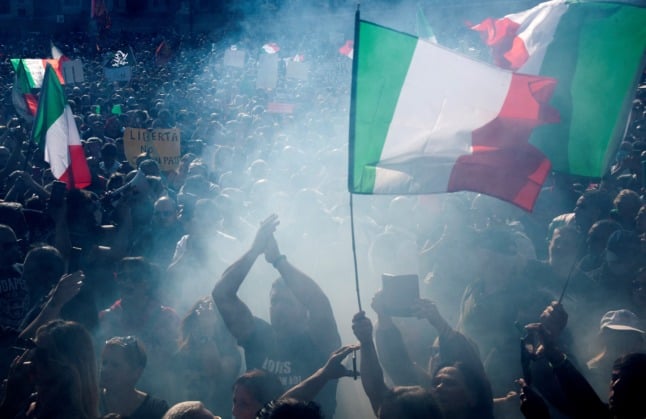 Far-right groups are thought to be behind violence at 'No Green pass' protests in Rome on October 9th, 2021. Photo: Filippo Monteforte /AFP

On Monday the centre-left Democratic Party (PD) presented a motion in parliament calling on Prime Minister Mario Draghi’s administration to dissolve Forza Nuova and all other fascist-inspired political movements in the country.

“We hope that all genuinely democratic political forces will sign… The time has come to put an end to ambiguities regarding fascism,” PD said in a statement.

While ‘apology for fascism’ is legally recognised as a crime in Italy, groups like Forza Nuova are allowed to operate.

Along with CasaPound, Forza Nuova is the main neo-fascist organisation active in Italy and is known for violence against immigrants and police.

Most recently, the group has been involved in several protests against the use of Italy’s green pass, with leading members of the group addressing crowds in Rome during demonstrations before rampaging through the city. Leader of Forza Nuova Giuliano Castellino speaks on stage during a demonstration against the expansion of the green pass in Rome on July 27th, 2021. Photo: Andreas Solaro/AFP

Twelve people including Forza Nuova leaders were arrested and 38 police officers were injured on Saturday after protests descended into violence, as one group broke into the CGIL trade union building and others attempted to reach Palazzo Chigi, which houses the prime minister’s office.

While police stopped rioters from reaching Palazzo Chigi using water cannon and tear gas, video footage appeared to show a small number of officers overwhelmed by a violent mob using sticks and metal bars to smash their way into the CGIL building.

Dozens of rioters also attacked the accident and emergency unit at Rome’s Policlinico Umberto I hospital, forcing health workers to barricade themselves inside, as one nurse was reportedly hit with a bottle.

After meeting Draghi on Monday, CGIL leader Maurizio Landini said the government had pledged to discuss the dissolution of Forza Nuova in the coming days, Reuters reports.

“The prime minister has expressed the solidarity of the government and the commitment of all institutions to prevent the return of a past we don’t want,” Landini said.

“All those groups that refer to fascism must be dissolved, and now is the time to say so clearly.”

Two separate investigations into the riots in the capital have been opened by prosecutors, Italian media reported on Monday.

The violence was widely condemned by politicians, including by Giorgia Meloni, leader of the far-right Brothers of Italy party, which is often accused of having close links to neo-fascist groups and is known for recently putting forward Fascist dictator Benito Mussolini’s granddaughter and great-grandson as candidates in local and European elections.

Forza Nuova’s leaders were unapologetic, releasing a statement on Monday that read: “The popular revolution will not stop, with or without us, until the green pass is definitively withdrawn.”