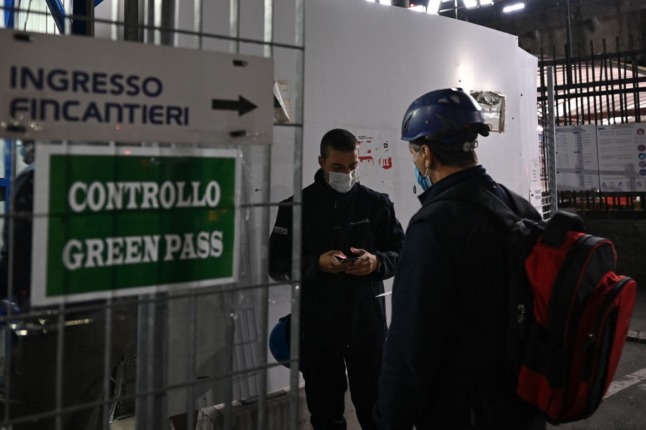 As of Friday morning all employees in Italy must show a green pass to access their workplace or face being declared absent without pay. Photo: Marco BERTORELLO/AFP

All employees in either the public or private sector must show the health certificate, known as the green pass, offering proof of vaccination, recent recovery from Covid-19 or a negative test result – or face being declared absent without pay.

The requirement has already been in place for school and university employees and care home workers since September, and a vaccine mandate has been in place since April for anyone working in healthcare, including in pharmacies and doctors’ offices.

The certificate has also been required since August 6th to enter most cultural, entertainment and leisure venues in the country.

More than 86 percent of Italians over the age of 12 have received at least one jab, thus automatically qualifying for the pass.

But up to five million adults of working age are estimated to be unvaccinated – and most will only be able to work if they pay for their own tests either every 48 or 72 hours, depending on the type.

This number appears to include many in the freight industry – and with many angry at the new rules and refusing to comply, there are fears of economic disruption.

Ivano Russo, director general of Confetra, a trade group, told AFP that out of a total of 900,000 truck drivers, couriers and warehouse staff employed by members of his lobby, “25-30 percent” do not have Covid certificates.

Dock workers in Trieste, a major port in the northeast, have threatened to go on strike indefinitely despite being offered free Covid tests.

The same privilege has been extended to some dockers in Genoa, in the northwest.

“The real problem with the green pass for the port of Genoa, in general for all ports, will be road haulage,” Roberto Gulli of the Uil trade union told La Repubblica newspaper.

“There could be chaos on Friday.”

Public protests against the measure are also expected on Friday, sparking concerns that there could be a repeat of the violent clashes involving far-right militants seen in Rome last weekend. The anti-vaccine and anti-green pass movement is planning further protests on Saturday while unions are preparing for a big anti-fascist rally in Rome.

More than 560,000 green passes were downloaded on Wednesday, according to government data.

There was no information available about whether those passes were generated based on vaccinations or testing.

Health ministry figures released last week showed that the number of first jabs continued to decline, while the rate of rapid testing was on the rise.

A survey published on Thursday found that some 55 percent of the population supports the introduction of the green pass rule in workplaces.

Prime Minister Mario Draghi’s government has defended the green pass system as necessary for avoiding further lockdowns or closures in Italy, where the economy is expected to record almost six percent growth this year after a devastating Covid-induced recession.

Ministers looked unlikely to concede to calls for free Covid tests for all, but the Ansa news agency reported that they were considering larger tax breaks for firms that pay for testing.

So far, unlike neighbouring France, Italy has not offered widespread free testing to the population.

Proposals that the state should give free tests to those who refuse the vaccine have proven divisive in the country.

Employees who are unable to receive a coronavirus vaccine due to a certified medical condition are exempt from the requirement to produce a green pass at work.