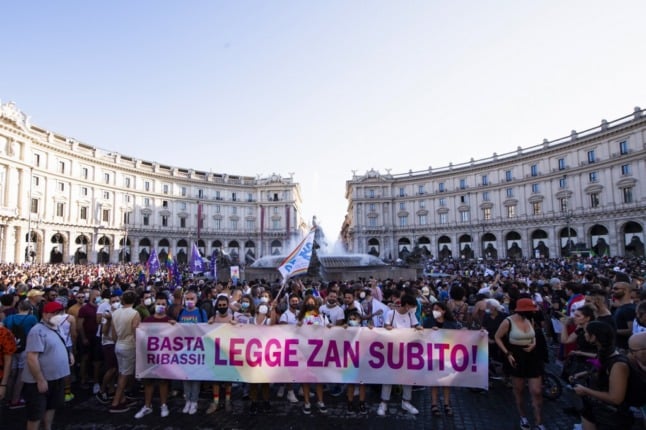 The law, known as the ‘ddl Zan’, sought to punish acts of discrimination and incitement to violence against gay, lesbian, transgender and disabled people.

It was proposed in May 2018 by Alessandro Zan, a member of parliament from the centre-left Democratic Party, in response to what he called an “exponential rise in the number and seriousness of acts of violence towards gay and transgender people”.

READ ALSO: What is Italy’s proposed anti-homophobia law and why is it controversial?

Critics of the law said it risked endangering freedom of expression and would have paved the way for “homosexual propaganda” in schools.

In a 154-131 vote called by the far-right League and Brothers of Italy parties, the upper house agreed to block its passage through parliament after it was approved last November by the lower house.

The vote was secret, meaning that lawmakers did not have to publicly declare their position, allowing several of them to defy their party’s line.

The outcome is a “betrayal of a political pact that wanted the country to take a step towards civilisation”, Zan wrote on Twitter.

In June, the Vatican took the unprecedented step of lodging a formal diplomatic complaint against the law, saying it breached the Concordat, the bilateral treaty between Italy and the Holy See.

Notably, the Vatican was concerned that under the homophobia law, Catholics risked prosecution for expressing opinions in favour of traditional heterosexual family structures.

In response, Prime Minister Mario Draghi said parliament was “free” to legislate on the issue, as Italy “is a secular state, not a confessional state”.

READ ALSO: Italy ranked ‘one of the worst countries in Western Europe for gay rights’

In July, Zan’s centre-left Democratic Party (PD) rejected calls from centrists and those on the right to water down the contents of the bill in a bid to seek bipartisan support.

According to League party leader Matteo Salvini, the PD and the Five Star Movement – which  also supported the bill – were defeated for their “arrogance”.

“They said no to all compromise proposals, including those proposed by the Holy Father (Pope Francis), by associations and by many families,” Salvini said.

In Italy, a predominantly Catholic country that is also home to the Vatican, legislation on LGBT issues is particularly sensitive.

However, a poll in July suggested the law had popular backing, with 62 percent of Italians in favour of the reform.