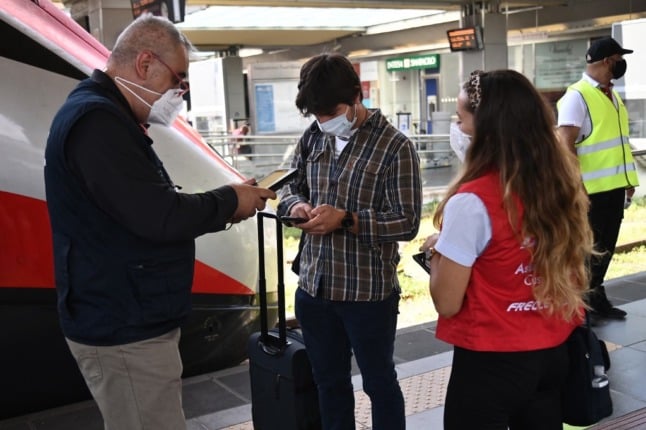 Green pass rules and a state of emergency could be extended to stop a rise in Covid cases. (Photo by Marco BERTORELLO / AFP)

With a significant increase in positive Covid cases week-on-week, doubling within the last three weeks alone, Italy’s health ministry may extend the use of the Covid-19 health pass system until March, news agency Ansa reports.

Deputy health minister Pierpaolo Sileri predicted that people in Italy would be “free” this Christmas, in contrast to the ‘red zone’ holiday lockdowns in force last year. However, he stressed that for now there’s no talk of relaxing or abolishing the green pass rules.

The ‘certificazione verde‘ or green pass as it’s called in Italy shows that the holder has been vaccinated, has recently recovered from Covid or has tested negative for the virus within the previous 48 or 72 hours, depending on the type of test taken.

Following its introduction in June, Italy made the Covid health pass a requirement for all employees as well as customers at all public or private sector workplaces from the middle of last month.

In order to extend these rules. Italy’s government would also need to prolong the state of emergency – which allows coronavirus containment measures to be introduced rapidly by government decree.

Italy’s state of emergency was first declared in January 2020 and has been repeatedly extended since.

The current expiry date is December 31st, 2021, meaning all rules – including those on the green pass – would also expire on that date. So far, no possible extension date has been suggested. “The weekly incidence at national level is increasing rapidly and across the board compared to the previous week, just below the threshold of 50 weekly cases per 100,000 inhabitants,” stated Italy’s Health Ministry in its latest Covid weekly monitoring report.

“The estimated transmissibility on symptomatic cases is increasing and around the epidemic threshold,” the report stated.

For cases that result in hospitalisation, transmissibility is said to be increasing and above the epidemic threshold.

The occupancy rates of beds in medical and intensive care areas associated with the virus are also no longer decreasing, but are stable, confirmed the authorities.

“This trend needs to be monitored very carefully and, if confirmed, could be a prelude to an epidemic resurgence,” the report warned. The figures are similar to those of September and October last year, when Italy first introduced the its four-tiered system of restrictions and forms of lockdown, with rules depending on the classification each region falls under.

While this system is still in place, all regions are currently in either the lowest-risk ‘white’ or low-risk ‘yellow’ zones. Moving to ‘orange’ or ‘red’ would entail new restriction locally.

However, the increase in cases, which began in October throughout Europe, is mitigated in Italy by the vaccination rate “which is why our epidemiological situation is among the best,” according to Sestili.

Data for vaccinations show that Italy is ahead of the European average, including countries like France, Germany and the United Kingdom.

To continue the vaccination campaign, which now has a new target of covering 90 percent of the eligible population, a possible extension to the green pass is hoped to encourage those who are still unvaccinated to get a shot by making it obligatory to access almost all areas of public life.

Currently, Italy has vaccinated almost 83 percent of the eligible population over 12 years old, according to the latest government data.

This means some 8 million people in Italy who are able to get vaccinated still haven’t elected to.

Meanwhile, Italy is set to offer everyone a third dose of an anti-Covid vaccine from January, health officials said.