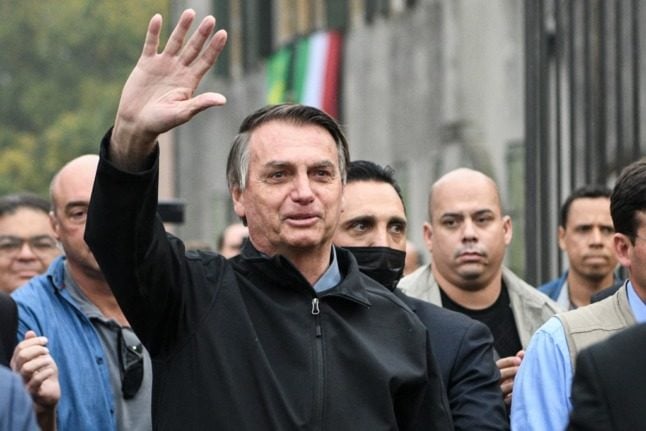 The right-wing Brazilian leader skipped climate talks in Glasgow to receive the accolade in the northeastern town of Anguillara Veneta, following his showing at the G20 summit in Rome this weekend at which he received  a frosty reception from other world leaders.

The city council decided to honour Bolsonaro with mayor Alessandra Buoso, a member of the far-right League party, saying the town wished to “reward the welcome that migrants from Anguillara Veneta have received in Brazil”.

But the move caused a stir in Italy and about 200 people protested against honouring a leader who has faced international criticism for his policies on the environment in the wake of massive deforestation in Brazil.

Bolsonaro is also under fire at home after a Brazilian Senate commission endorsed a report seeking to indict him on nine counts, including crimes against humanity, over his Covid response.

About 606,000 Brazilians have died from Covid-19, meaning the country’s death toll is second only to the United States.

Protesters carried banners reading “Bolsonaro out” and “No citizenship for dictators”, while one read “Anguillara loves Brazil but not Bolsonaro”.

The Democratic Party (PD) in Veneto said the decision to honour Bolsonaro was “a disgrace” and  a “shame for Italy”. In nearby Padua, police fired water cannon to keep some 500 demonstrators at bay outside the San Antonio basilica which Bolsonaro had earlier visited while the venue was closed off to the general public.

Monday’s ceremony took place at an elegant 17th century villa with Bolsonaro guest of honour at a long dinner to which around 200 people were invited.

About a thousand people from the Italian town, which now has a population of 4,200, fled poverty to emigrate to Brazil at the end of the 19th century, among them Bolsonaro’s grandfather.

“I am moved to be here. It’s from here that my grandparents left” for Brazil, Bolsonaro told the gathering.

“I am pleased to be surrounded by good people, the AGI news agency quoted him as saying.

“It was God’s will that I become president of Brazil… We are doing excellent work which is certainly recognised by the people but not by the mass media,” he went on.

Italian media reported that hosting Bolsonaro had cost the town’s council about €10,000.

On Tuesday Bolsonaro will be accompanied on a visit to Pistoia, Tuscany, by League leader Matteo Salvini, before leaving for Brazil in the afternoon.