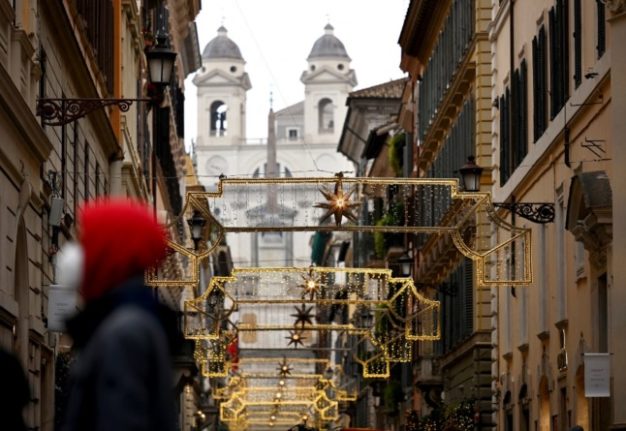 Christmas lights on Rome's Via dei Condotti on December 23rd, 2020, a day before Italy went back under lockdown during the Christmas week. Photo: Vincenzo Pinto/AFP

As Italy’s health ministry continues to report a worsening situation every week, it looks increasingly likely that some regions may be placed back under restrictions in the coming months – and many people are wondering whether and how this could affect plans for Christmas and New Year.

But the second holiday season amid the pandemic is set to look very different from the first in Italy, where tough ‘red’ and ‘orange’ zone restrictions last year severely limited travel, events and socialising and meant most people spent a quiet Christmas Day at home.

Despite the rising curve in Italy and beyond, the return of such tight restrictions this year looks unlikely so far.

The picture is very different this time, health experts say, with infection and hospitalisation rates markedly lower by comparison and the vast majority of the population vaccinated.

The Italian government appears fairly confident that no further restrictions will be needed over the holidays, with Health Minister Roberto Speranza stating this week that “it will be a Christmas like any other before Covid, if hospital wards can keep up.”

If the health situation does worsen, he warned: “measures will be taken by region, based on the coloured system”.

While every region of Italy is currently under low-restriction ‘white zone’ rules, the country has not abandoned its tiered system of health measures.

A return to ‘yellow’ zone rules would mean masks were required outdoors, plus new restrictions on some businesses such as restaurants. But if regions are placed in the higher-risk ‘orange’ or ‘red’ zones, this is likely to mean business closures, travel restrictions and other tough restrictions. Deputy Health Minister Pierpaolo Sileri said he was “confident that we can trust in a peaceful Christmas” this year.

“Hospitals should not end up in trouble, thanks to the many who are vaccinated and thanks to the green pass system”, he told newspaper Corriere della Sera.

But health experts struck a more cautious note, warning that people in Italy should not drop their guard as infections skyrocket across Europe.

“There are many days left [until Christmas] and it is difficult to make predictions,” CTS coordinator Franco Locatelli told news channel Sky TG24.

“It will certainly be a Christmas characterised by greater sociality than last year,” he said.

The improved health situation in Italy this year is not down to chance, he stressed, crediting “the important work done with vaccinations” and “the contribution of the green pass” as well as continued mask use in Italy.

Italy’s green pass health certificate, which shows that the bearer is vaccinated, tested or recovered, is a requirement at many cultural and leisure venues, for teachers and parents at schools, and on some forms of public transport. It also became obligatory in all workplaces on October 15th.

Italy today has one of the lowest rates of cases in infections and hospitalisations in Europe at the moment, and the second-highest vaccination rate among larger EU member states, after Spain.

With 84 percent of the eligible population now fully vaccinated against Covid-19, Italy stands a better chance than some of its European neighbours of avoiding a surge in infections ahead of – or during – Christmas and New Year.

As in other countries, hospital data in Italy shows that the majority of serious cases are among the unvaccinated.

Millions of people in Italy are still yet to have a first dose of a Covid vaccine, health data shows.

Health experts say that breakthrough cases are also being recorded among those who were vaccinated early this year.

As immunity begins to wane for some, the government is pushing to roll out more booster shots to keep coverage high – as well as aiming to have 90 percent of the eligible population vaccinated.

“A further expansion of vaccinations, for example with third doses, will allow us a less complicated Christmas,” Massimo Galli, Professor of Infectious Diseases at the University of Milan, told Sky TG24.

He said that, while the fourth wave is expected to hit in December, “it will be small” in Italy.

Third doses, masks and “adequate” testing and tracing in schools should mean the fourth wave in Italy will “remain small, not an overwhelming one like in other countries,” Walter Ricciardi, a professor of hygiene and preventive medicine and a health advisor to the Italian government, said on Monday.

However Ricciardi said he expects a worsening of the health situation “between January and February”, saying waves of Covid infection are coming “in very predictable cycles “

Health experts warn that the pandemic “has not been put behind us” and urge people to remain cautious, with some predicting a bigger surge in cases in early 2022 partly fuelled by festive gatherings and holiday travel.

Andrea Crisanti, director of the Department of Microbiology of the University of Padua, advised people to “celebrate Christmas and New Year, but perhaps only between vaccinated people, and with the necessary precautions in place.”

Locatelli said individual behavior was “fundamental” to keeping infections down, and said that “continuing to reiterate the message of wearing a mask, avoiding gatherings, and not thinking that the situation has been put behind us, is absolutely crucial.”

What about travel restrictions?

Italy’s current set of travel rules is in place until December 15th, meaning there is scope for the government to change the rules shortly before the holidays.

However at this stage the government has not said anything about either tightening or relaxing the rules in time for Christmas.

Though it is possible that new restrictions could come in for countries with high infection rates, at the moment restrictions on travel from most countries are minimal for those who are vaccinated.

Some ten million people in Italy are planning to travel this Christmas and New Year after cancelling plans last time, according to business assocation Coldiretti.

Italy’s tourism and ski resort operators reportedly said they were “cautiously optimistic” after two difficult seasons, noting that there had been a recent surge in bookings for the Christmas period.