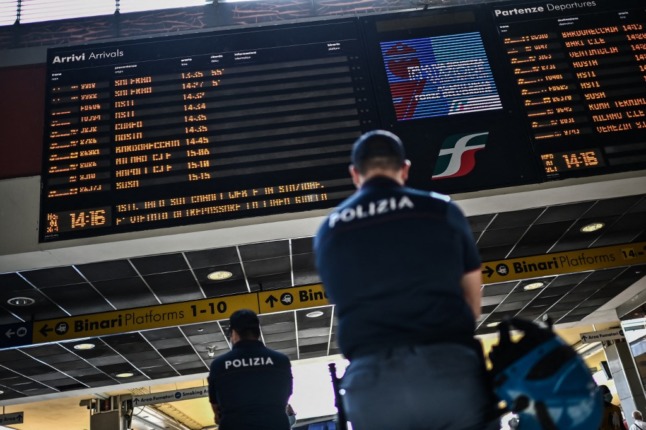 Rules on the use of Covid health passes are being tightened in Italy as the infection rate rises. Photo: Marco Bertorello/AFP

If they get the go-ahead as expected, this means a tightening of the rules around Italy’s ‘green pass’ Covid health certificate.

Ministers have repeatedly indicated that the government is unlikely to bring back new lockdowns or restrictions on travel and business openings like those seen last Christmas as all of Italy was placed under ‘red zone’ rules.

Instead, authorities are relying heavily on the green pass system and increased vaccination coverage to keep the spread of the virus in check.

Though infection and hospitalisation numbers have been steadily rising in Italy for weeks, the figures remain smaller in Italy than in many other parts of Europe and ministers continue to insist the fourth wave remains “under control” in the country.

Here’s a look at the measures the Italian government is – and isn’t – considering in order to keep the numbers down ahead of the Christmas holidays.

The first of Speranza’s proposals would make third doses of an anti-Covid vaccine mandatory for healthcare workers.

The move comes after soaring infection rates were reported among doctors and nurses in particular over the past two months.

The uptick is thought to be partly explained by the fact medical staff were among the first to be vaccinated in early 2021 and may now have waning immunity.

Vaccination has been mandatory for all health workers in Italy since a law was passed in April, with those who refuse being reassigned to roles away from the public where possible or suspended without pay.

A new obligation to get a booster shot is expected to cover the same healthcare staff as Italy’s initial vaccine mandate, including those working in pharmacies and care homes.

The change is likely to come in from December, reports Italian newspaper La Repubblica, and health workers will have thirty days to comply. Health workers were the first to be vaccinated as Italy began its immunisation campaign on December 27th, 2020. Photo: Marco Bertorello/AFP

Italian health authorities also aim to speed up the rollout of third doses to the general public, with Speranza announcing last week that boosters would be available to all over-40s from December.

On Monday, Health Undersecretary Andrea Costa reiterated that the ministry was still looking at making Covid vaccines obligatory for more groups, under plans the government has been considering since late summer.

Speranza’s other proposal will cut the validity of Italy’s Covid-19 health certificate – the so-called green pass – from 12 to nine months for people who are vaccinated, including with a third dose.

This change is also expected to come in from December.

The pass is a requirement at all Italian workplaces as well as care homes, sports facilities, indoor leisure venues and some forms of public transport.

It is not yet known how the expiry date of passes will be changed, with La Repubblica suggesting that new QR codes may need to be sent out.

There was no word on whether the health ministry is also planning to cut the validity of passes issued following a negative test result, as reported in recent days by Italian media.

Reports speculate that the validity of PCR test results may also be cut from 72 to 48 hours, and those from the results of rapid testing will be reduced from 48 to 24 hours.

The issue of the validiity of green passes based on testing is partiuclarly contentious after the pass became a requirement at all workplaces in October.

Those who refuse to be vaccinated must now pay for a rapid test every 48 hours or face suspension from work.

Green passes have been mandatory in all Italian workplaces since October 15th. Photo: Vincenzo Pinto/AFP

There have also been calls from health experts and regional leaders to stop issuing the passes based on rapid test results, as these are less reliable than the results of a (more expensive) PCR test.

So far however there is no indication that the government is planning to do this.

The health ministry has already made some adjustments to the green pass system this week in light of the rising infection rate: a new ordinance signed on Monday tightened the requirements for train and taxi passengers.

From this week, green passes must be checked before passengers board interregional trains rather than on board as was previously the case, and railway police have new powers to stop trains in order to remove passengers who don’t comply with the rules, as well as those who “exhibit symptoms associated with Covid-19”.

For now, Speranza has only proposed two new additional measures. But, La Repubblica writes, “if the regions continue to push for further tightening, the ever more cautious minister certainly won’t be the one to block the strengthening of certain measures.”

However, while some further changes and extensions look likely in the coming weeks, other proposals have been ruled out.

Though Costa stated this week that the extension will be decided on nearer to the expiry date, it looks all but guaranteed that Italy’s state of emergency will be extended beyond the current deadline of December 31st, 2021.

Known as the stato di emergenza in Italian, the declaration of emergency status gives more power to the national government and regional authorities to bring in new laws rapidly in response to the changing health situation.

Without it, the conditions that allow authorities to enforce the green pass rules and other health measures decreed during the emergency will not exist past December 31st .

Italian media reports that the next extension would likely be for three or six months, though nothing has been confirmed by the government.

There are reports in Italian media on Wednesday that quarantine requirements in some form may be brought back over the Christmas holidays for people arriving in Italy from countries with high contagion rates.

La Repubblica says “quarantine for those arriving from Eastern [European] countries” is likely, or that “at least” current rules requiring a health pass proving testing, recovery or vaccination could be tightened, possibly to require proof of vaccination plus a negative test result for entry, as is currently the case for arrivals from some non-EU countries including the US.

However, no change has been announced or confirmed by any official source. New lockdowns for the unvaccinated?

There is widespread speculation in Italian and international media this week that Italy could follow the example of some other European countries by bringing back partial lockdown measures like those seen last winter – but applying them only to those who are not vaccinated.

The speculation is based on statements made by some of Italy’s regional governors as well as some prominent politicians within the coalition government, including Italia Viva leader Matteo Renzi.

This week, regional heads plan to put proposals in front of the government for a tightened green pass system which would effectively block people whose passes were issued based on testing from entry to certain venues, Rai reports – which would be similar to rules recently implemented in countries including Austria, the Czech Republic and parts of Germany.

However, for now at least, the Italian government appears to be against the plan, with many of the country’s top health experts advising against it.

He added that this was not being considered “in the transition phase between white and yellow zones”.

News agency Ansa meanwhile reported on Wednesday that the Italian government has no intention of introducing restrictions that would only apply to unvaccinated people, citing unnamed sources within the government.

“No clampdown along the lines of the Austrian model is being studied,” the sources reportedly said.

Walter Ricciardi, an advisor to the health minister, said last week that Italy “doesn’t need” to follow Austria’s lead by implementing a lockdown for the unvaccinated “because the measures taken serve to keep the epidemic under control, as is happening.”