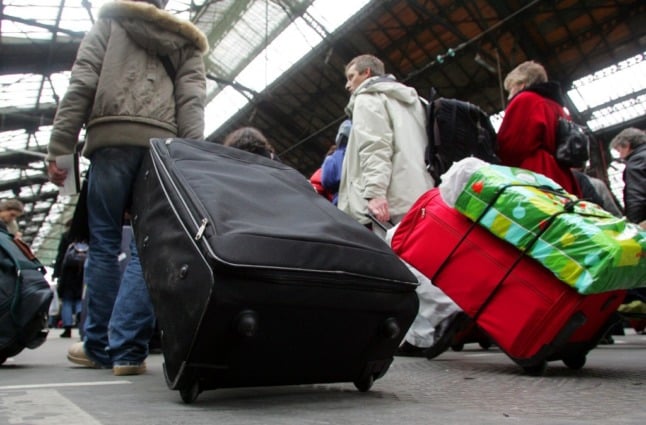 If you're planning to travel between the UK and Italy this Christmas, the rules on taking festive goodies with you have changed. Photo: FRANCOIS GUILLOT/AFP

If you’re heading home to spend Christmas with family or they’re coming out to stay with you, be aware of the rules regarding food and drink, and what you can and can’t bring in and out of Britain and the EU.

Some rules changed for the first time last year following Brexit and many are still catching up with the changes, so read the Local’s guide below to make sure you aren’t caught out at customs.

Flying to the UK from Italy

For those returning to the UK from Italy, the rules are relatively lax.

Note, if you’re spending Christmas in Northern Ireland there are different rules on food and animal products. Find them here.

You can bring the following products from Italy into the UK without worrying about any restrictions:

If, like many of us, you have friends and family already putting in their orders for Italian treats, know that the rules on bringing meat, dairy, fish and other animal products into the UK are relatively relaxed.

You can bring in meat, fish, dairy and other animal products as long as they’re from the EU, so your Parmigiano Reggiano or finocchiona is safe.

Note that you can’t bring in these foods from another non-EU country when travelling to the UK with a connecting flight via Italy.

Your friends and relatives in the UK won’t have to go without Italian cheese and salumi this Christmas. Photo: Getty Images/AFP

For many, the big one, but there are some limits on how much booze you can bring in from Italy and the EU more generally.

How much you can bring depends on the type of alcohol, so get up to speed on the limits and make sure your Prosecco or Barolo isn’t taken off you or heavily taxed:

When bringing tobacco into the UK from Italy, you can bring in one from the following:

As with alcohol, you can split the allowance – so, the UK government specifies, you could bring in 100 cigarettes and 25 cigars (both half of your allowance).

Flying into Italy from the UK

While British borders are laid back when it comes to travelling with food and drink, the rules on food and drink are much tougher when entering the EU from the UK.

Importantly, tea bags – longed for by Brits the world over – are allowed. Marmite, which is vegan, is also OK but Bovril, which contains beef stock, is not.

Travellers arriving in the EU from Britain can, according to the European Travel Retail Confederation (ETRC), bring the following quantities of alcohol, so if you fancy a British tipple in Italy over Christmas it is possible, within reason: 4 litres of still wine and 16 litres of beer, 1 litre of spirits, or 2 litres of sparkling or fortified wine.

READ ALSO: ‘Not just extra paperwork’: What it’s like moving to Italy after Brexit

Italy is generous when it comes to importing tobacco products; the EU has a lower limit and a higher limit, and Italy has opted for the higher limit. That means you can bring any of 200 cigarettes, 100 cigarillos, 50 cigars, or 250g of smoking tobacco.

If you arrive in the EU from a non-EU country, you cannot bring any meat or dairy products with you. That means no Wensleydale, no Cornish Brie, and no British bacon to enjoy in Italy over Christmas.

The EU’s strict rules mean that all imports of animal-derived products technically come under these rules, so even chocolate is now banned because of the milk. Don’t pack mince pies if you’re travelling from the UK to the EU. Photo: Daniel Norris/Pixabay

Similarly, if you’re planning on asking a friend or family member to bring you over some sweets, cakes, or other home comforts, be aware that the ban includes all products that contain any meat or dairy as an ingredient – which includes things like chocolate, fudge, custard and sweets (because of the gelatine.)

You are allowed to bring a small quantity of fruit and vegetables as well as eggs, some egg products, and honey.

Restricted quantities of fish or fish products are also allowed: eviscerated fresh fish products (gutted, with all the organs removed), and processed fishery products are allowed up to 20 kg or 1 fish, so you can enjoy some Scottish smoked salmon in Italy over Christmas if you want.

If you’re travelling with kids, note that powdered infant milk, infant food and specifically required medical foods are allowed up to 2kg, as is the case for pet foods.

READ ALSO: How Brexit will affect the postal service between Italy and the UK over Christmas

Even classics like Christmas pudding and mince pies are banned because they contain suet, so if you’re planning on a British-style Christmas abroad, these won’t be making an appearance this year.

It is worth noting that these strict EU rules also apply when sending products by post, so if you were hoping to get around the newly applicable legislation by having someone send you a delivery of mince pies, they will probably be intercepted and confiscated by Italy’s postal service, unfortunately.