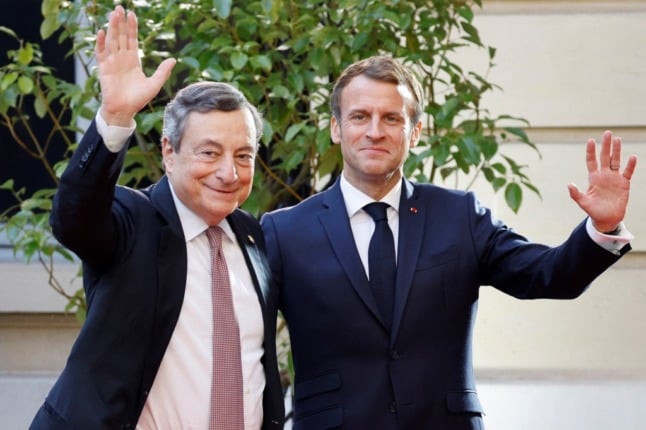 An aerial acrobatic display by both countries’ air forces followed.

The deal is aimed at tilting the balance of power in Europe after the departure of German Chancellor Angela Merkel, according to Italian government sources cited by Reuters.

The accord will boost cooperation between the countries on the economy and industry, culture and education, security, cross-border cooperation and foreign affairs.

The project was first mooted in 2018 under Italy’s then-premier Paolo Gentiloni, but relations between Rome and Paris deteriorated after the election of the populist government of the League and the Five Star Movement.

At a press conference, the leaders of the two Mediterranean powers long bound by historical, cultural and linguistic ties emphasised their closeness, but also their joint commitment to the wider EU project.

Draghi called it a “historic moment”, which “intends to favour and accelerate the process of European integration”. The treaty was signed just weeks before France takes over the rotating EU presidency in January, and at a time of change on the continent.

Britain’s messy exit and rows between the EU’s liberal democracies and their eastern neighbours have roiled the bloc, while its de facto leader, German Chancellor Angela Merkel, is finally bowing out following September elections.

Macron noted the two countries had had “difficult moments”, likely a reference to a diplomatic crisis in early 2019 when Italy’s then populist government openly criticised the French president.

Ties improved with a new government in Rome later that year and have gone from strength to strength with the arrival in office earlier this year of Draghi, a former European Central Bank chief.

Draghi thanked Macron for handing over former members of the far-left Red Brigades group that terrorised Italy in the 1970s and 1980s. Their safe haven for decades in France had been a long-standing source of tension.

There has also been simmering irritation in Italy over feelings it has been left by European allies to face tens of thousands of migrants from North Africa who arrive on its shores each year.

Draghi said both sides agreed on the need for a shared EU migration and asylum policy.