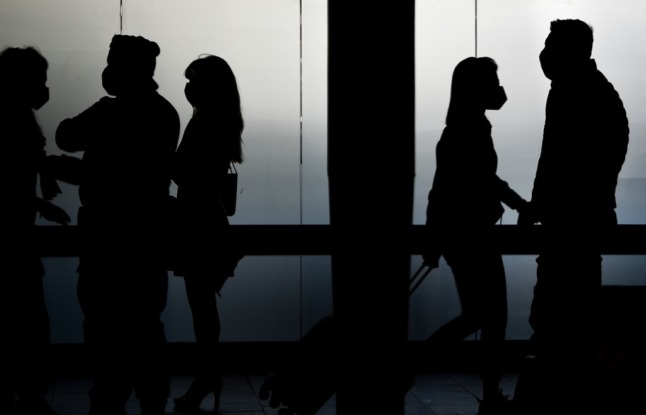 A top laboratory “sequenced the genome from the positive sample of a patient coming from Mozambique”, the national health institute said in a statement.

“The patient and the members of their family are in good health,” it added.

They said tests would soon determine whether anyone in the family residing in Caserta, in the southern region of Campania, had also been infected by the variant.

Italy on Friday banned entry to all travellers who had been in seven countries in southern Africa in the past fortnight after the new variant was discovered there.

It also suspended flights from the region.

Italian authorities ordered anyone already in Italy who had travelled there in the past two weeks to immediately inform the authorities, get tested, isolate for 10 days, and then re-test at the end of that period.

The Caserta patient infected with the Omicron variant reportedly landed at Fiumicino on November 11th on a flight from South Africa, after travelling from Mozambique. At the time of departure the patient had no symptoms and had tested negative for Covid, Ansa writes.

Health authorities on Sunday were contacting passengers who had arrived in Italy in recent days from areas where the variant is thought to have spread, news agency Ansa reported.

Security sources at Rome Fiumicino Airport said “airline companies are required to deliver passenger lists and these are picked up directly, to then be subjected to the usual health checks”.

Italy has been one of the countries hardest hit by the coronavirus pandemic in terms of fatalities with more than 133,000 deaths reported since February 2020.

It has been recording more than 10,000 new cases daily in recent days.

On Wednesday, the government announced it would be accelerating the administration of booster shots and tighten health measures next month for those who are unvaccinated.

This includes incentivising vaccine uptake by increasing restrictions for those who have yet to get the vaccine with the so-called ‘Super green pass’.

The country’s Covid-19 green pass health certificate will no longer allow access to “non-essential” services including leisure and cultural venues unless the bearer is vaccinated against or recovered from Covid-19.

In addition, some regions are set to see a return to ‘yellow zones’ under Italy’s four-tier system for coronavirus restrictions: ‘orange’ zones operate under a higher level of restrictions than yellow zones and ‘red’ zones are subject to the strictest requirements.

Italy’s tourism earnings are predicted to total €17 billion this summer, restoring the industry to a state of health not seen since the start of the pandemic, according to a study released by the retailers’ association Comfcommercio on Monday.

Americans are the lead drivers of the recovery, the report shows, with 2.2 million US visitors expected to bring in €2.1 billion between July and September – 20 percent more than over the same period in 2019.

READ ALSO: MAP: Which parts of Italy will get the most tourism this summer?

Canadians, Australians and South Africans are also anticipated to make up a significant proportion of this year’s visitors.

The high value of the dollar against the euro is thought to be partly responsible for this year’s boom in US arrivals.

The euro slipped to parity with the dollar for the first time in nearly 20 years this month, as a cut in Russian gas supplies to Europe heightened fears of a recession in the eurozone.

It has since recovered a little, to around $1.02 per euro, but remains a huge bargain for visitors, giving tourists from dollar countries a spending power boost of well over 10 percent from six months ago.

The number of Spanish arrivals is also expected to return pre-pandemic levels this summer, with an estimated one million visitors due to arrive between July and September.

Domestic tourism is also up, with 35 million Italians travelling on holiday in their own country despite an ongoing cost of living crisis caused by soaring inflation and exacerbated by the war in Ukraine, according to a separate study by the agricultural association Coldiretti.

By contrast, the number of tourists coming to Italy from Asian countries is down; while EU sanctions introduced in the wake of Russia’s invasion of Ukraine have seen Russian tourism drop to near zero.

Germany, a key source of tourism particularly in the Italian south, was down 27 percent in July compared to 2019 – a drop thought to be caused by air travel disruption.

In a typical year, the majority of Italy’s tourists (14.1 percent) come from Germany, figures from Italy’s National Statistics Agency Istat show. Around three percent come from the US, and another three percent from the UK.

“The return of foreign tourism after three years helps to consolidate our economic recovery. The outlook, however, is uncertain due to the decrease in consumption, the unrest in air transport and the unknown pandemic,” said Confcommercio president Carlo Sangalli in a televised statement.

“Support for the tourism sector must therefore be among the priorities of the next executive in terms of combating expensive energy and reducing the tax burden,” he added.

Italy will vote for a new government in late September after its ‘unity’ coalition government collapsed in July, triggering snap elections.